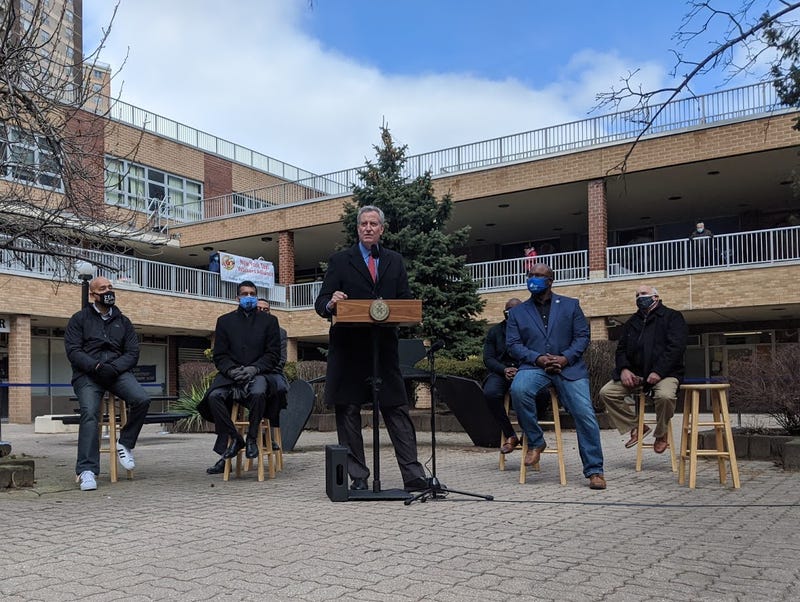 As many as 50 Bronx seniors had already been vaccinated at the newly opened site, which was toured by Mayor Bill de Blasio on Saturday morning.

“The Bronx is going to help lead the way,” the mayor said. “Now that we have the Johnson & Johnson vaccine, we can finally reach our homebound seniors, because it’s a vaccine that is so much easier to work with. It does not require the same refrigeration. It’s one shot, it’s one shot and you’re done.”

The site is among the first to come directly to senior citizens, especially in communities of color, rather than having seniors travel for the shot.

The site is part of the mayor’s goal of getting 5 million New Yorkers vaccinated against the coronavirus by June. The city aims to vaccinate 1,000 people at the Co-Op City site each day.

“There is a place for the big sites, of course, but what I like are the sites right here where people live,” de Blasio said. “Right here in Co-Op City is a great example. Here in Co-Op city, you see an amazing site that has been set up in a matter of days.”

The #COVID19 vaccine has come to Co-Op City! Join us in the Bronx. https://t.co/YyG0BWibTn

De Blasio said word of mouth is the best way to relieve fears and skepticism surrounding the shot.

Lawmakers of color also joined the mayor in saying they’re aware of the grim history surrounding vaccines, but they said the COVID vaccines are different.

“Not just the Tuskegee experiment, but the experimentation with the cells of Henrietta Lacks. The forced sterilization of the Black and Latino community, both here and in Puerto Rico,” Rep. Jamaal Bowman said. “I’m fully aware of that history, but as a member of Congress, I felt that it was my responsibility to lead the way.”