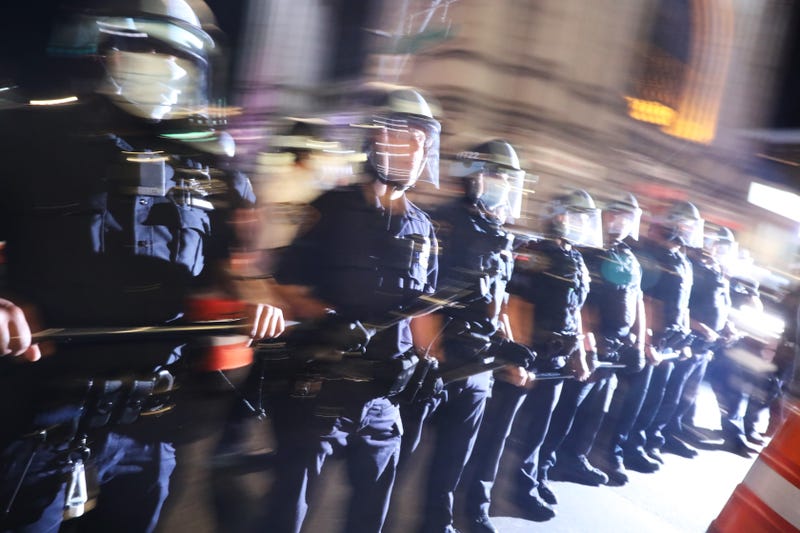 NEW YORK (WCBS 880/AP) — Two civil rights organizations are suing the New York Police Department on behalf of protesters who say they were roughed up by officers because they expressed anti-police views during nightly demonstrations in the spring in the wake of George Floyd's killing.

The lawsuit, filed Monday in federal court, also accuses city leadership of doing little to curtail police conduct that included trapping protesters with a technique called kettling, hitting them with pepper spray, inflicting violence and detaining them for hours. One plaintiff suffered a broken arm as a result of the police department's conduct, the lawsuit said.

The organizations, the New York Civil Liberties Union and the Legal Aid Society, are seeking monetary damages for 11 named plaintiffs, as well as reforms such as training officers to respect the rights of protesters and swift discipline for officers who used excessive force. They are also asking a court to declare the police department's actions unconstitutional.

"It's imperative that there be a whole retraining of the police department that they have to respect the right to protest, and that their response to protest cannot be violence, cannot be abusive, and that they need to protect everybody's rights," said Donna Lieberman, the executive director of the New York Civil Liberties Union. 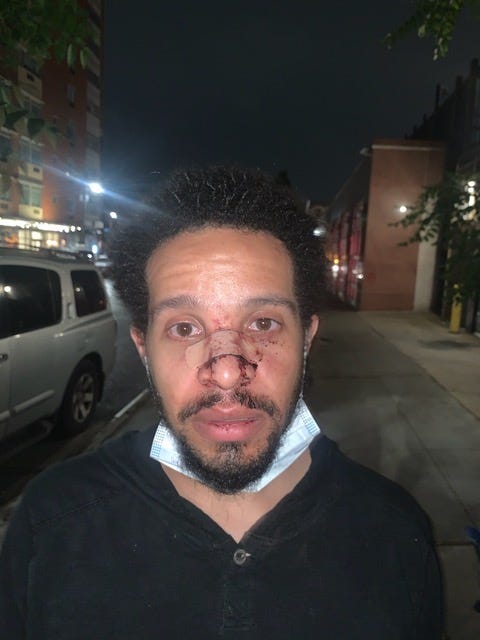 Plaintiff Jarrett Payne said he was protesting peacefully on a sidewalk along Fifth Avenue when he claims he was blindsided by officers.

"And before I knew it, I had up to seven officers beating me with batons over the top of me," the 34-year-old said. "Within a second I'm blindsided, and hit and thrown to the floor by an officer from behind."

A spokesperson for the NYPD said, "We will review the lawsuit if, and when, we are served."

During his daily briefing Monday, Mayor Bill de Blasio said, "I'm not going to speak to the details of the lawsuit, but I think the underlying concept just isn't fair."

Tens of thousands of people took to the city's streets for mostly peaceful protests spurred by the May 25 police killing of Floyd in Minneapolis and other instances of police brutality. Some smash-and-grab sprees and sporadic unrest led New York City officials to impose a citywide curfew for several days, which led to clashes between protesters and police officers attempting to clear the streets.

James said in a preliminary report in July that she had received more than 1,300 submissions from protesters and that most of the complaints involved NYPD officers using excessive force, "indiscriminate use of pepper spray, brandishing firearms at protesters, and pushing vehicles or bikes into protesters.''

Other complaints concerned "troubling arrest-related practices,'' including the use of "extremely tight zip ties,'' misgendering detainees and holding protesters in cramped cells.

In June, at the height of the protests, de Blasio was accused of misleading the city when he told reporters that he personally saw "no use of force around peaceful protests,'' even after officers had been caught on video moving on demonstrators without provocation and bashing them with batons.

"If the leadership of the police department and of the city turned a blind eye to wrongdoing, well then it simply encourages it," Lieberman said.