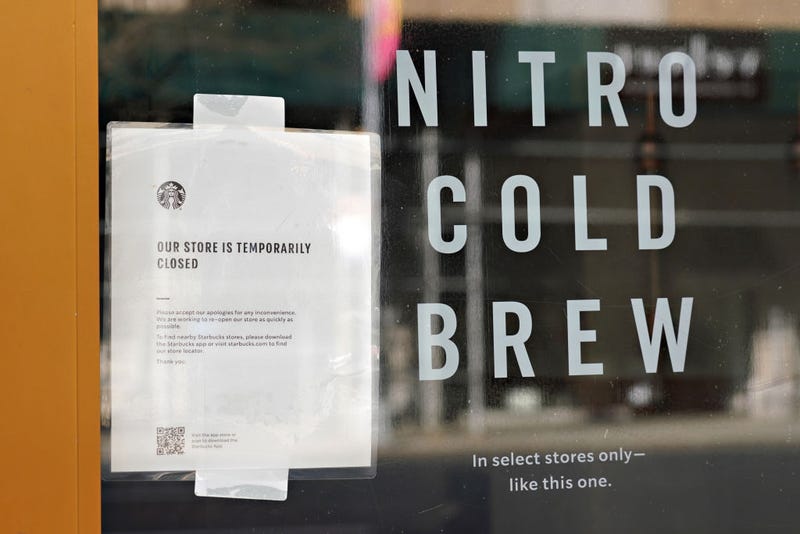 A closed Starbucks store as the coronavirus continues to spread across the United States on March 20, 2020 in New York City. Photo credit Cindy Ord/Getty Images
By WCBS 880 Newsroom

NEW YORK (WCBS 880) — Small businesses all over New York City are rapidly disappearing amid the pandemic, but it appears chain stores are also suffering.

The Center for an Urban Future's executive director Jonathan Bowles spoke with WCBS 880 this morning, saying the reality of the pandemic is present in nearly every corner of New York City.

“We found each in every borough had at least an 8.5% decline in the number of chain stores and that's unprecedented, that hasn't happened before,” Bowles said. “But, Manhattan had the biggest drop.”

Over 1,100 chain stores, including 70 Duane Reades, 54 Starbucks and 22 Papyruses, have shut their doors permanently in New York City.

In Manhattan, there were 546 chain closures this year and Bowles thinks it has to do with a number of factors.

“I think that's because Manhattan had kind of a triple whammy. There are fewer tourists in hotels in Manhattan, office workers aren’t coming in and a lot of the wealthier residents of Manhattan have decamped to their second homes,” he explains.

Bowles said many of these chains in Manhattan and other boroughs rely on foot traffic, which has been scarce since March.

“Clearly the stores, the eateries have been impacted by the decline in office workers, people that are coming into office is because of the pandemic, so many sandwich shops burger joints, copy stores in and around midtown have shut down. We are seeing lots of other retailers across the city that clearly have been hurt by foot traffic and that’s one indication of how unusual this year is even Dunkin Donuts is closing stores this year,” Bowles said.

However, not every industry has had it bad.