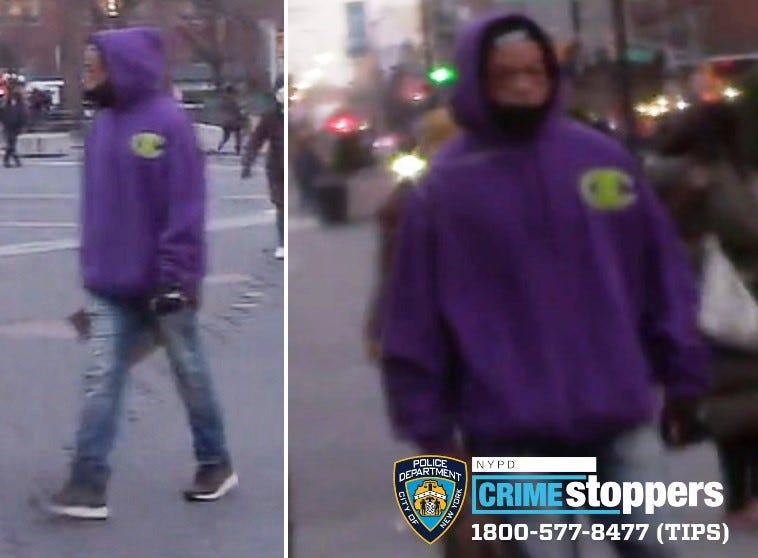 Police are searching for this individual in connection to an apparent anti-gay attack that occurred on Jan. 21, 2021. Photo credit NYPD
By WCBS 880 Newsroom

NEW YORK (WCBS 880) — Police are searching for a man who was involved in an apparent anti-gay attack last week.

The incident happened on Thursday, Jan. 21 at around 2 p.m.
inside of Union Square Park, at East 17th Street and Union Square West.

Authorities say a 45-year-old man was inside the park when an unknown individual approached him and punched him in the face.

The victim told police that the attacker then made several anti-gay statements, but authorities did not provide details.

The victim suffered pain and bruising to his mouth.

Authorities were not called to the scene as the victim reported the incident at a later time and the individual remained in the park.

The NYPD has not said if the attack is being investigated as a hate crime.

Police described the attacker as a Black man around 25 to 30 years old. He was last seen wearing a purple hooded sweater, blue jeans and black sneakers.

Anyone with information in regard to this incident is asked to call the NYPD's Crime Stoppers Hotline at 1-800-577-TIPS (8477) or for Spanish, 1-888-57-PISTA (74782). The public can also submit their tips by logging onto the CrimeStoppers website at WWW.NYPDCRIMESTOPPERS.COM or on Twitter @NYPDTips. All calls are strictly confidential.