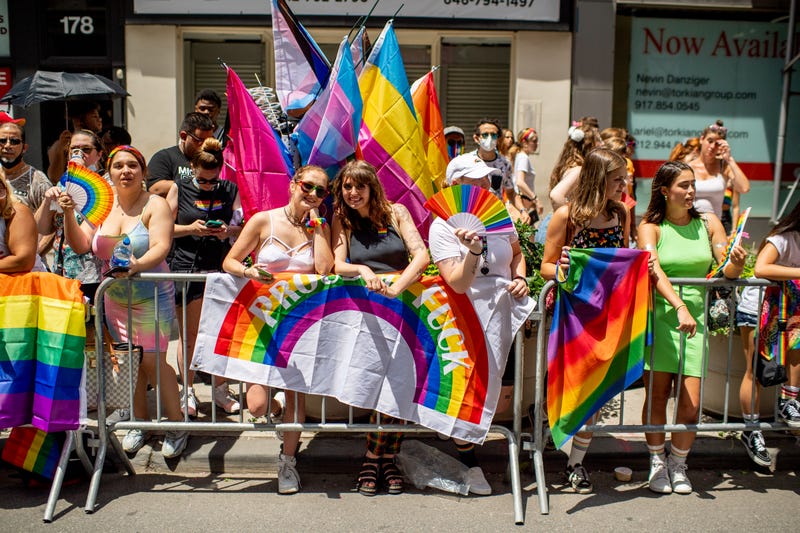 NEW YORK (1010 WINS) — The New York City Pride celebration has returned to being mostly in-person this year, with a plethora of activities organized by the city and other well-known city institutions starting next week! Here are highlights from throughout the month:

First LGBTQ+ Pride Flag Hoisted on Federal Land
- Federal officials and LGBTQ+ activists will hoist the rainbow flag on the first Pride flagpole on federal land, in Christopher Park on Christopher Street, in the heart of the Stonewall National Monument and across from its namesake bar, which launched the LGBTQ+ rights movement. This will be the first rainbow flag to fly 24/7 on federal land, and the installation ceremony will kick off Pride month 2022 in New York City. 1 p.m., free, open to the public. 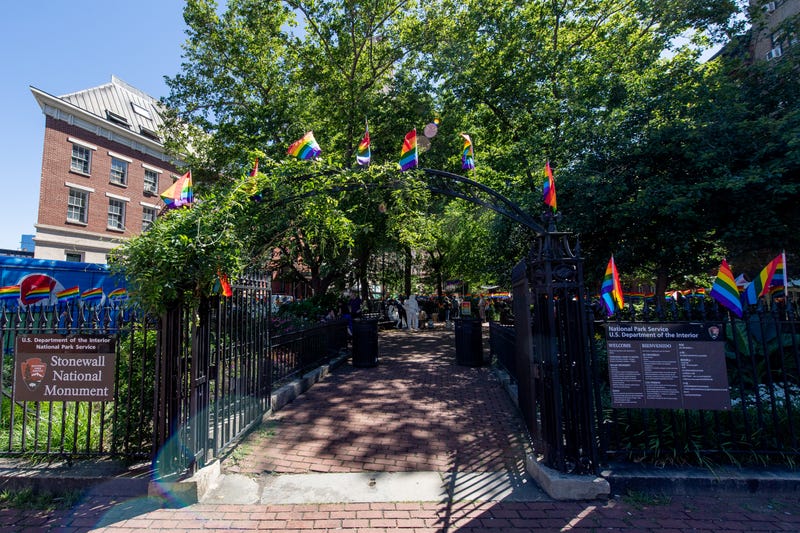 The Stonewall Monument, located across from the Stonewall Inn in the West Village, is decorated with pride flags Photo credit Roy Rochlin/Getty Images

Songs for a Memorial (NYC AIDS Memorial)
- The Songs for a Memorial commissioned art piece consists of 12 text-based, polychromatic, LED sculptures designed to evoke neon signage and the dynamic energy of nightlife, creating vibrant layers of color throughout the memorial at St. Vincent's Triangle in the West Village. June 1-Sept 1., free, open to the public. 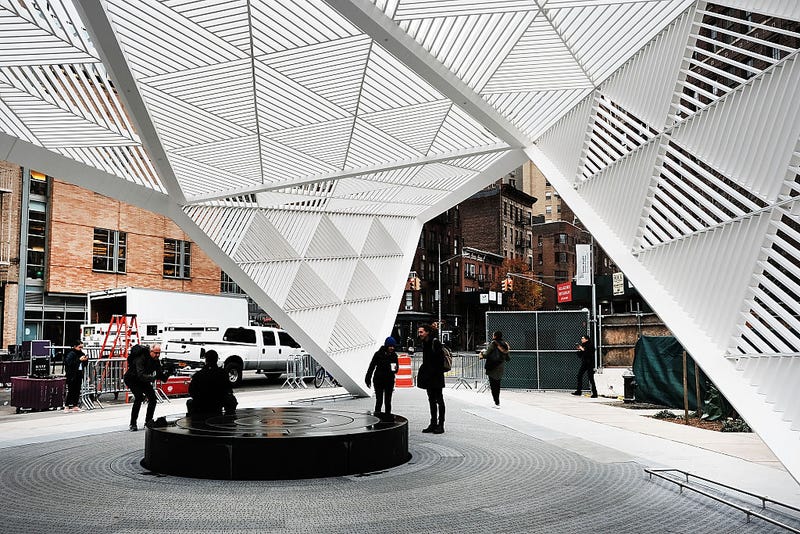 People walk through a new memorial to honor victims of the AIDS epidemic which was dedicated on World AIDS Day on December 1, 2016 in New York City. Photo credit Spencer Platt/Getty Images

Judy Garland at 100: Rufus Wainwright, Lea Michele, and Molly Ringwald in Conversation With Jordan Roth (92NY-in person/online)
- Join Grammy-nominated singer-songwriter Rufus Wainwright with "Glee" actress Lea Michele and "Riverdale" actress Molly Ringwald as they talk to Jordan Roth about the many sides of Judy Garland — her dazzling and iconic performances, her ongoing influence on American culture at large, and how she's inspiring a new generation of artists and performers — on what would have been her 100th birthday. 7:30 p.m. $20. For tickets & info: click here 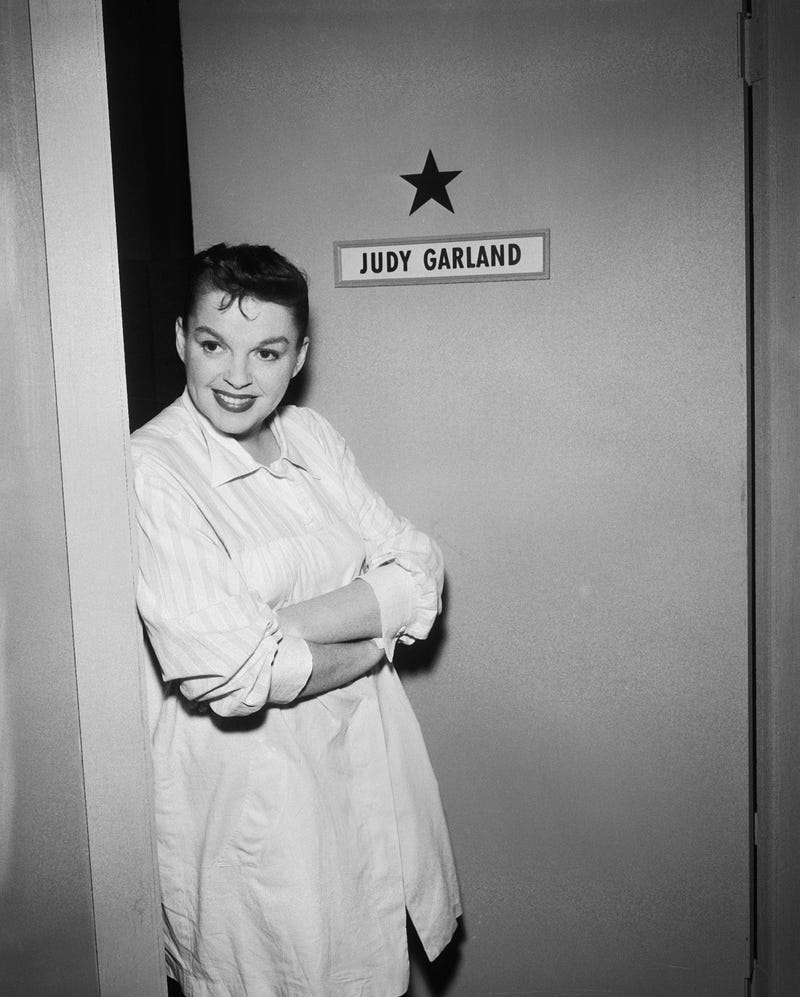 Julio Torres in Conversation With Bowen Yang: 'I Want to Be a Vase,' 'Los Espookys,' and 'Fire Island' (92NY-in person/online)
- Join SNL" writer Julio Torres and cast member Bowen Yang for a conversation about their longstanding friendship — from coming up together in a changing New York comedy scene to "SNL" and beyond — and a burst of creative energy that’s resulted in a slew of hilarious new projects. 5 p.m. From $20. For tickets & info: click here 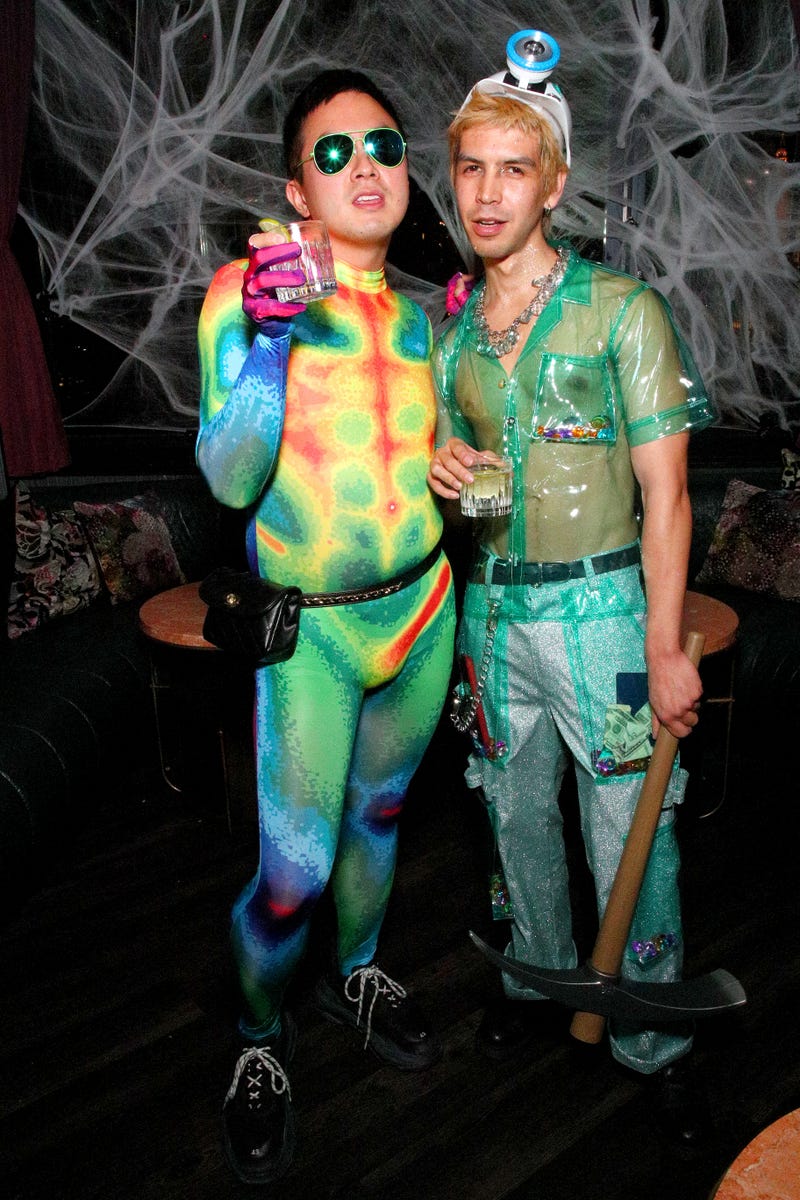 Bowen Yang and Julio Torres celebrate Halloween with specialty Ketel One cocktails at The Garden of Good and Evil hosted by Ketel One Vodka and The Fleur Room on October 31, 2019 in New York City. Photo credit Astrid Stawiarz/Getty Images for Ketel One Family Made Vodka

The Conference (NYC Pride)
- The annual symposium led by transformative changemakers in the queer community is back predominantly in person this year. Focusing on developing new ideas and approaches to activism and community, this year's conference will consist of powerful conversations, networking opportunities, interactive workshops, an amazing keynote session and a special cocktail reception to end the evening. 9:00 a.m. at the Brooklyn Law School.

NYC Drag March
- The annual event celebrated one week before the Pride March is back in honor of the drag community. The march will begin at Tompkins Square Park and ends in front of the Stonewall Inn. Friday, June 24 at 7 p.m., free, open to the public. 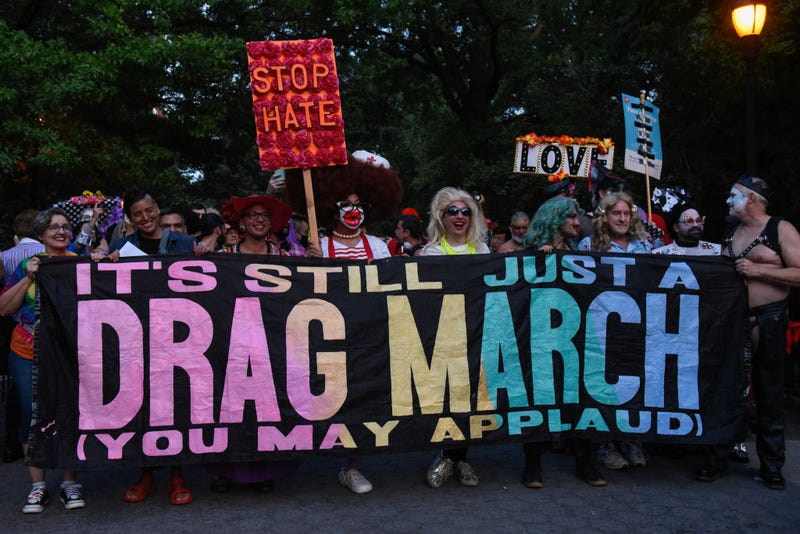 The Rally (NYC Pride)
- After two years of rallying the LGBTQIA+ online due to the COVID-19 pandemic, the NYC Pride rally is back in person! The first rally occurred one month after the Stonewall Riots in June 1969, when 500 people gathered for a “Gay Power” demonstration in Washington Square Park and followed by a candlelight vigil in Sheridan Square. NYC Pride has continued this proud tradition by hosting the event in various locations throughout the city. Friday, June 24th from 4 p.m. to 7 p.m.

PRIDE 365: LIVE! (Time Square Alliance)
- Pride 365: LIVE! will bring community/non-profit organizations and Broadway/Off-Broadway shows together to celebrate dynamic voices in the community, and support their continued fight for equity, diversity, and inclusion for all. Special guests, panels, surprise performances and more will take the stage on Friday, June 24 and Saturday, June 25.

Interactive Pride Installations (Time Square Alliance)
- Pedestrians and audiences in Times Square will have the opportunity to connect with Pride in Times Square sponsors ViiV and Audible with exciting and interactive Double Decker Buses, acting as anchor points for audiences to explore on Friday, June 24 and Saturday, June 25. Those buses will then become part of the NYC Pride March on Sunday, June 26 down 5th Avenue., free, open to the public.

The Big Broadway Disco (Time Square Alliance)
- Join Playbill as New York and Times Square celebrates Pride like never before. Times Square will “ignite the night” with THE BIG BROADWAY DISCO – a large-scale street party that invites revelers to dance through Times Square to classic and contemporary Broadway songs and performances – all with a disco flare and performed in the heart of New York City: Times Square. With the Playbill Pride Float acting as a focal point for the night, guests will experience a Pride celebration like no other, while entertained by DJ’s, performers, fabulous costumes, and more beginning at 6:00pm. 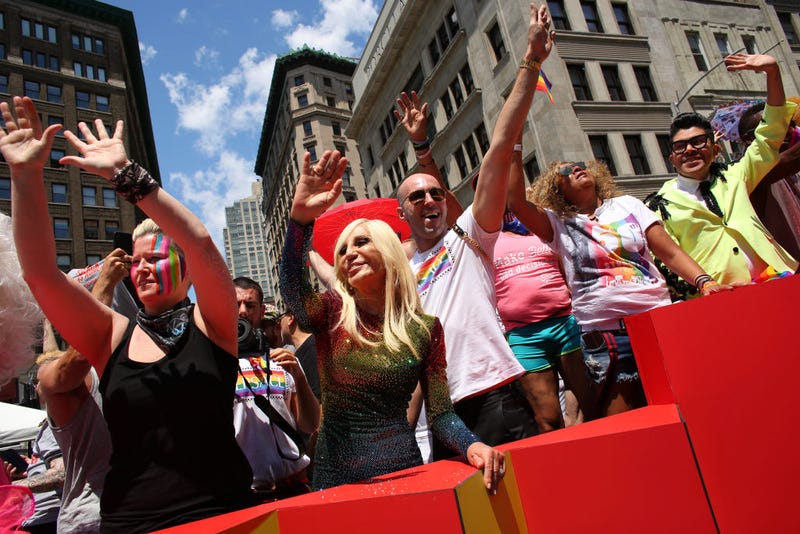 Hester Street Fair (NYC Pride)
- Shop with a roster of LGBTQIA+ owned and operated businesses and special programmers, dance the day away to the music of Bill Coleman, and see a live performance or two. Pier 17 in South Street Seaport, open to the public starting at 11:00 a.m.

Teaze (NYC Pride)
- Teaze is back after a two-year hiatus. Dance the day away with music from a mix of beloved DJs and performers at one of the most inclusive party venues in Brooklyn. Participants have the opportunity to experience four Queer party experiences during this day party event. These 4 party experiences center on BIPOC individuals in the LGBTQIA+ community and provide safe spaces year-round. 2 p.m. at 3 Dollar Bill at 260 Meserole St. in Brooklyn. (21+)

Pride Fest (NYC Pride)
- The LGBTQIA+ street fair that combines exhibitors, entertainers, food and activities for a day of fun and celebration in the name of equality is back. Greenwich Village, open to the public starting at 11:00 a.m.

The March (NYC Pride)
- The 53rd NYC Pride March will begin at noon on June 26th from 25th Street and 5th Avenue. Marchers will proceed south on 5th Avenue before heading west on 8th Street. After crossing over 6th Avenue, the march will continue on Christopher Street, passing the Stonewall National Monument. It will then turn north on 7th Avenue, passing the New York City AIDS Memorial, before dispersing in Chelsea at 16th Street and 7th Avenue. Open to the public. 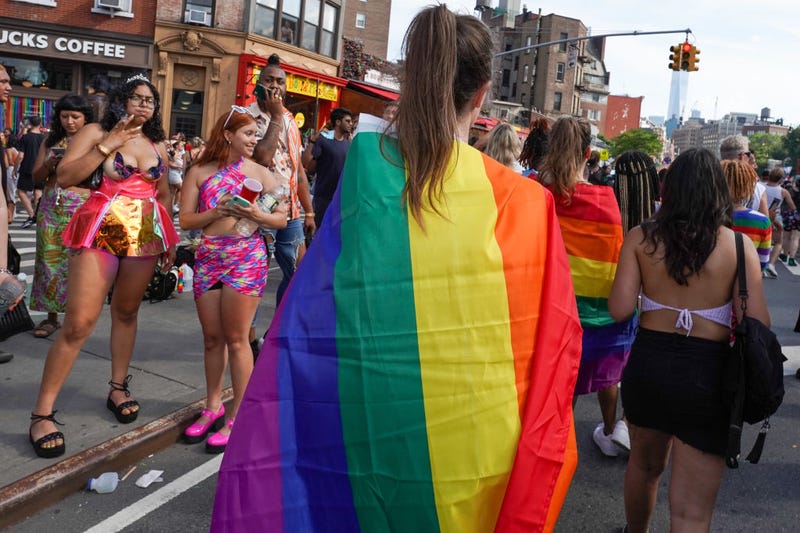 Cabaret Conservations With Michael Kirk Lane: Jeff Harnar (92NY-online)
- Award-winning cabaret performer and member of the 92Y Music Faculty, Michael Kirk Lane curates a series of conversations about the art form of cabaret in New York City. He will speak with Jeff Harnar, who has won multiple MAC, Bistro and BroadwayWorld Cabaret Awards and The Noel Coward Foundation Cabaret Award. Jeff’s fifth solo album will be released worldwide by PS Classics on June 17, 2022. 7-8:30 p.m. From $20. For tickets & info: click here.

The Hidden History of Gay Washington (92NY-online)
- Washington, D.C., has always been a city of secrets. Few have been more dramatic than the ones revealed in this lecture, by James Kirchick, author of "Secret City, The Hidden History of Gay Washington." For decades, the specter of homosexuality haunted Washington. The class will take place live online with an opportunity to interact with the instructor and be recorded for later viewing by patrons. 7-8 p.m. From $40. For tickets & info: click here. 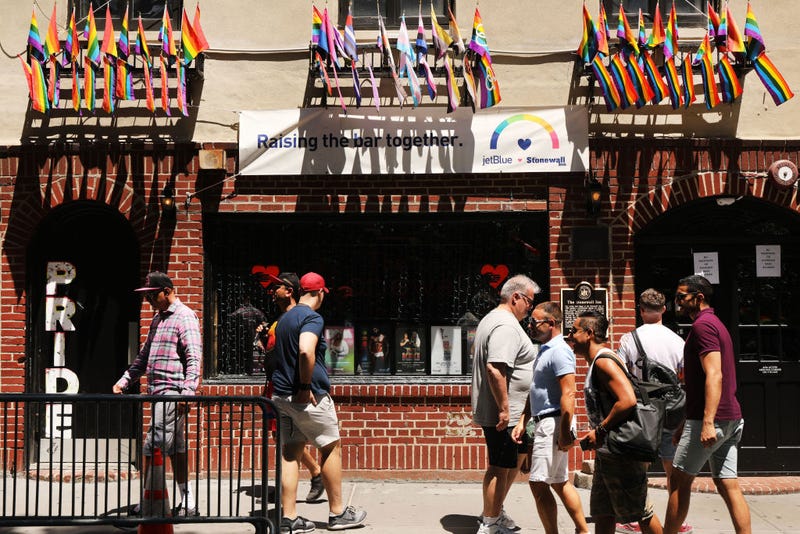 Meet Me On The Dancefloor (NYC AIDS Memorial)
- The hour-long storytelling program presented with the Generations Project focused on sharing tales from nights under the disco ball. 6 p.m. free.

Dance For A Memorial (NYC AIDS Memorial)
- Celebrate music and memory with the new installation Songs for a Memorial with a silent disco party at the NYC AIDS Memorial Park with DJ Lady Bunny, DJ Lina Bradford and more. 7-9 p.m. free.

For more Pride Month content listen to the 1010 WINS' "It's Okay to Say Gay" podcast with Femi Redwood. 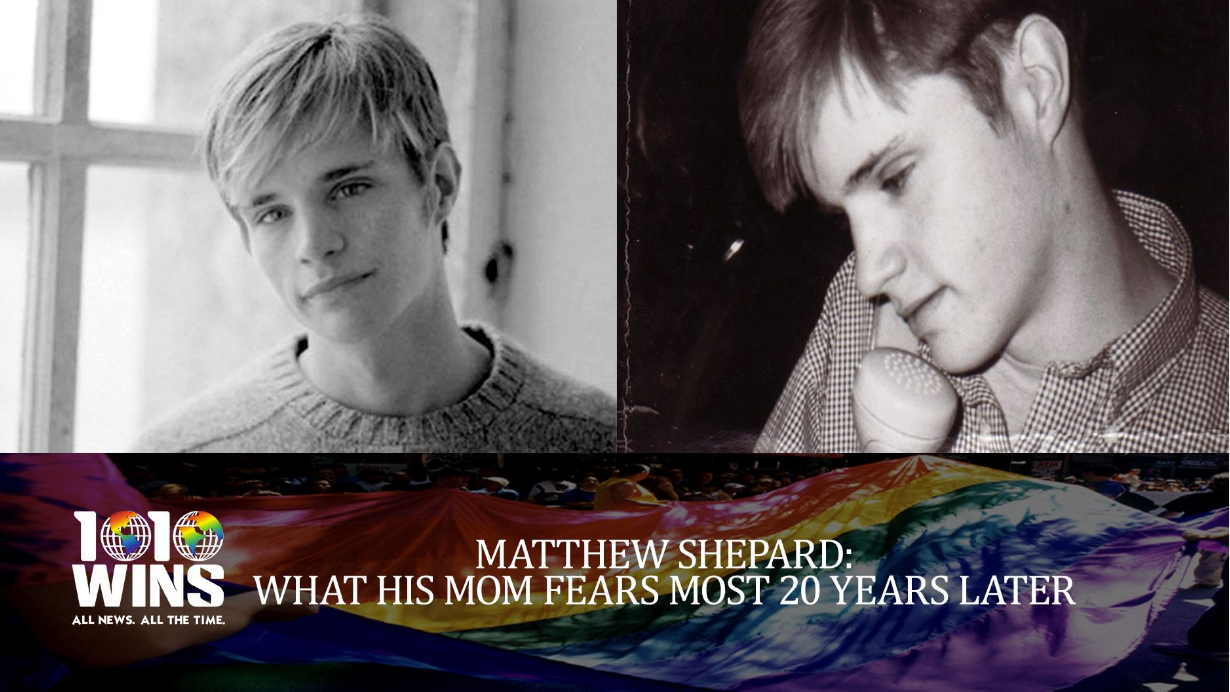 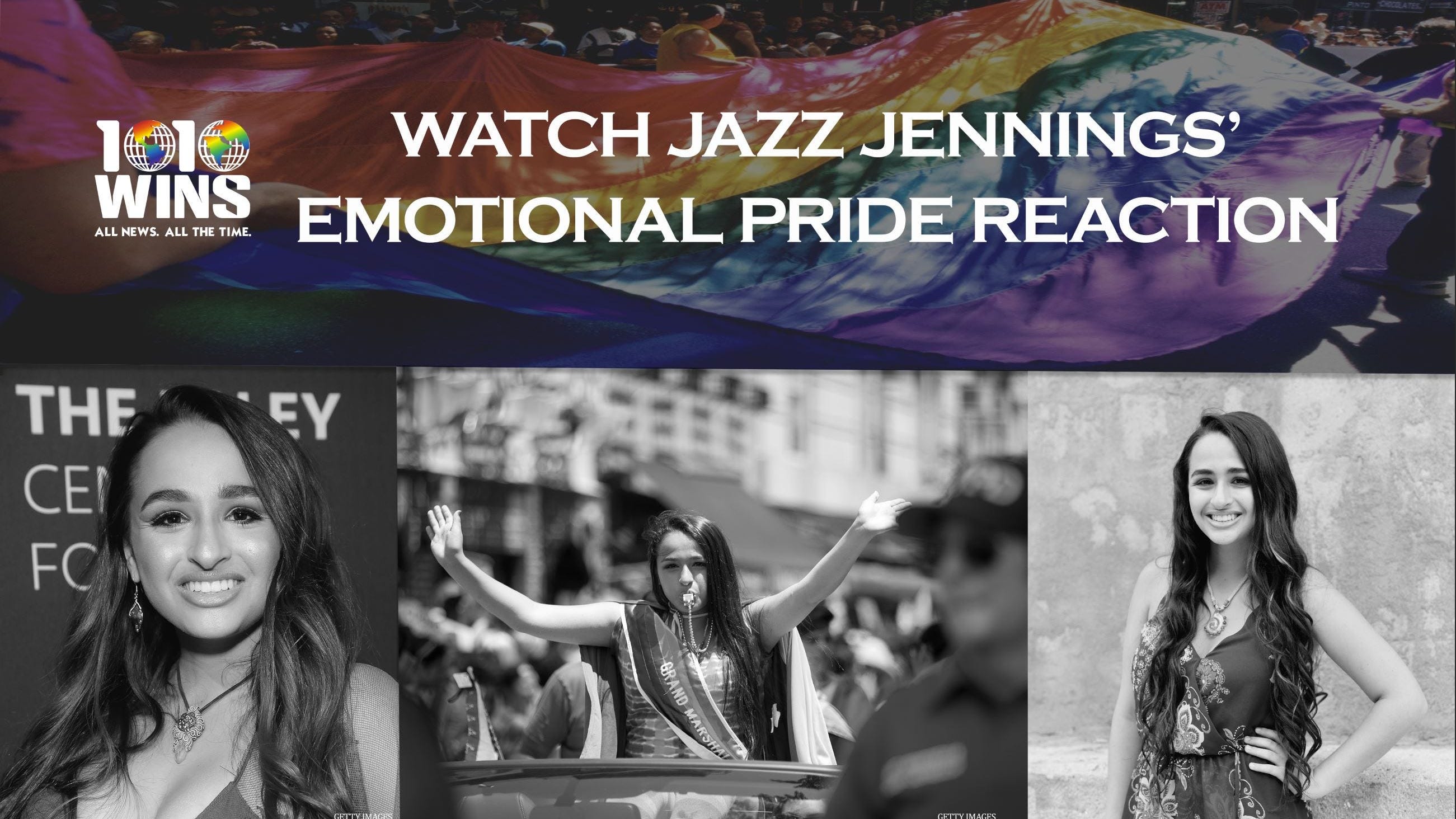 JAZZ JENNINGS: There was a time when 'I didn't really think anything meant anything in this world' 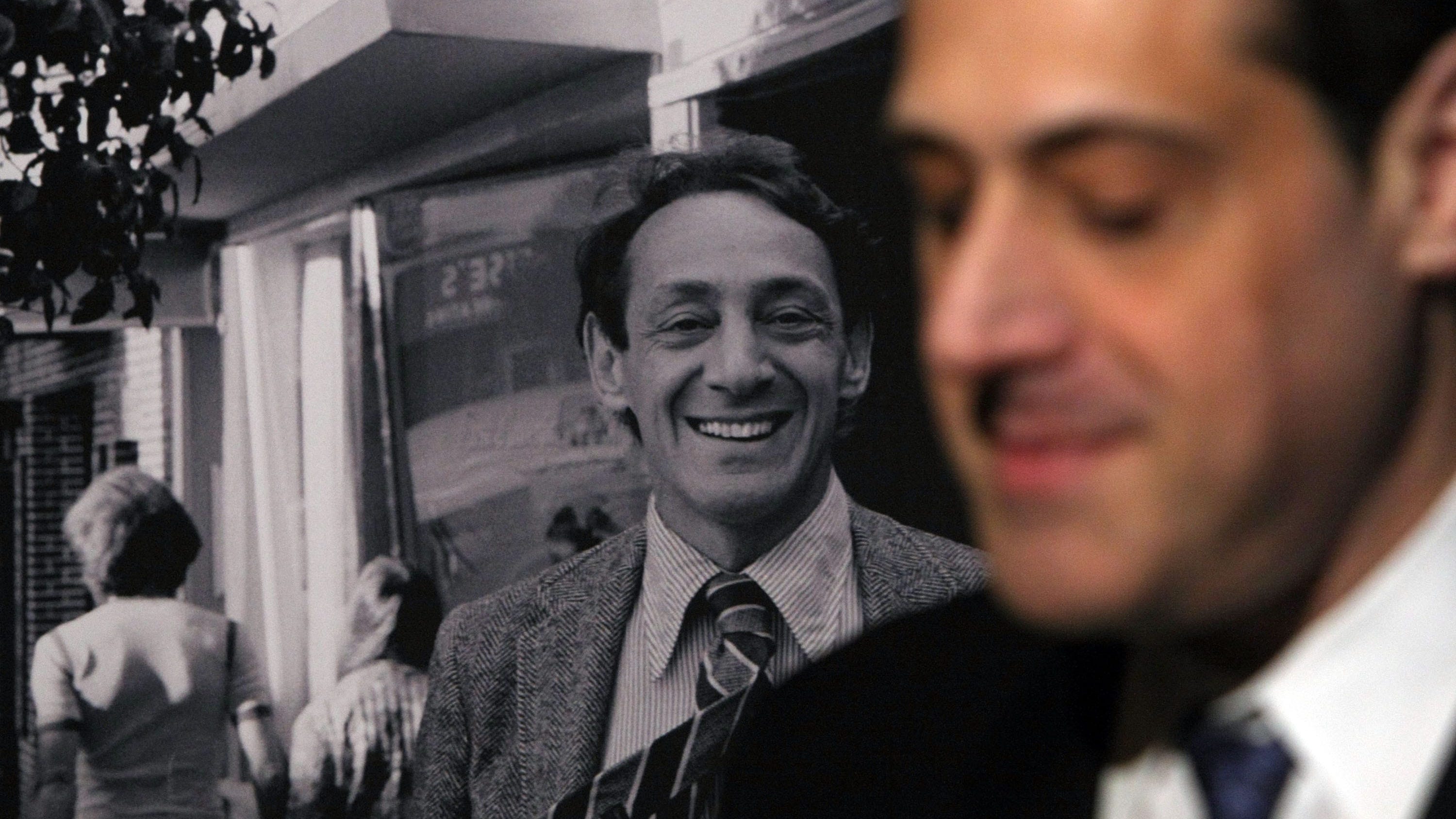 HARVEY MILK: The trailblazer who paved the way for LGBTQ lawmakers 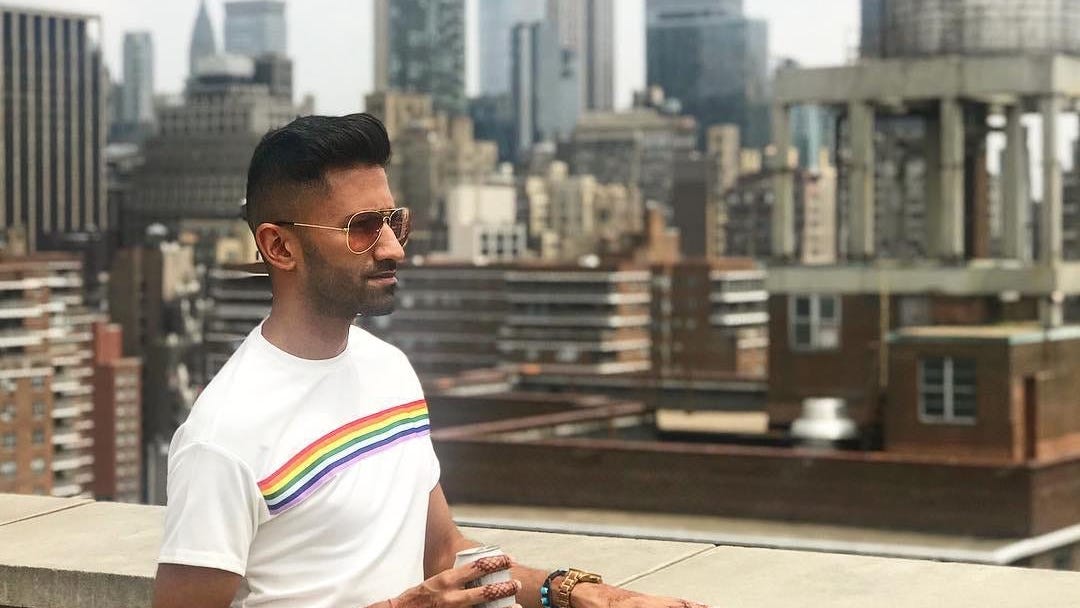 KARAN KATYAL: 'I thought being gay meant being trans and I knew I didn't want to be a woman'