In a press release Saturday afternoon, Cuomo said and that an additional 73,336 doses had been administered in the past 24 hours.

The state has received 934,925 doses and has administered 772,399 of them at the distribution sites, representing 83% of doses received, according to state data. Of the doses administered, 687,379 were first doses and 85,020 were second doses. 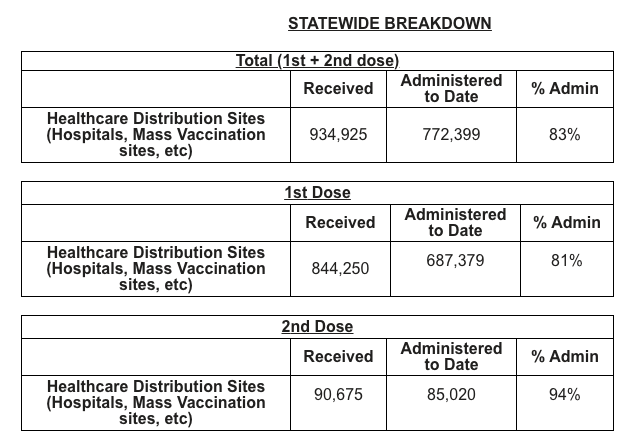 The Centers for Disease Control and Prevention said the state had distributed 37% of the 1.9 million doses received as of Friday, according to a report in the Wall Street Journal.

The CDC’s percentage would put New York on par with Ohio and Pennsylvania, but behind other large states like Florida and Texas, as well as Connecticut, which the CDC says has used 51% of its doses.

On Friday, Gareth Rhodes, an adviser to Cuomo, said, “The CDC number on its website is a global allocation number to New York that is not necessarily what has been delivered to New York so far.”

“It also includes the long-term care facility programs, which were federally run through the pharmacies,” Rhodes said.

On Friday, Cuomo said the number of doses the state was receiving from the federal government would drop next week from 300,000 to 250,000.

He compared getting the limited number of doses to the 7.1 million New Yorkers who are eligible to “opening the floodgates of eligibility and forcing it through a syringe.”