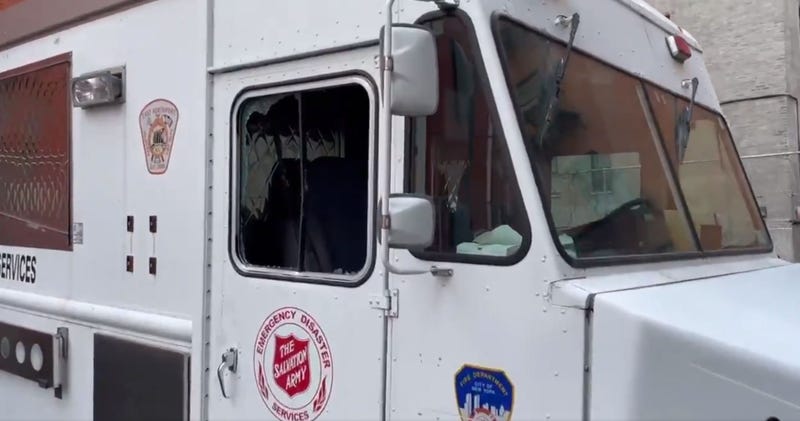 A Salvation Army mobile kitchen that was destroyed by vandals on Jan. 4, 2020. Photo credit Peter Haskell
By Peter Haskell

NEW YORK (WCBS 880) — The Salvation Army is asking for New Yorkers help in fixing a mobile kitchen that was vandalized last night in Harlem.

The Salvation Army Harlem Temple Corps Community Center says the center was vandalized either late Sunday or early Monday. The motive has not yet been uncovered but the vandals burned three vehicles – including a Salvation Army’s Mobile Canteen, which will cost approximately $250,000 to replace.

“This truck is always on the run, (there’s) not many of its kind as well,” he said. “It’s like a mobile kitchen it is fridges … stoves, everything is in this truck.”

VIDEO. Here’s a look at the damage done to a vandalized and burned @SalvationArmyUS truck in NYC. It’s unclear if it can be salvaged, but if not, a new unit would cost $500k. The canteen responds to fires, floods, the pandemic and other disasters. @wcbs880 pic.twitter.com/MCUYJYRAcf

The RV-like truck has the window smashed in and most of its equipment destroyed. Watch says the cooking gas was also used to light a Cadillac, that was parked nearby, on fire.

Watch says the truck was built to serve people during times of crisis. In Hurricane Katrina and Superstorm Sandy, thousands of meals were served out of the vehicles to first responders and those affected by the disasters.

During the COVID-19 pandemic, the trucks have been serving 300 meals per day to members of the community.

The particular truck that was vandalized was previously stationed/deployed at such locations as the EMS Battalion in Lower Manhattan, and in Riverhead, East Northport, Kingston, and Port Jervis Salvation Army Corps, according to the Salvation Army. It also served Thanksgiving dinner to the Salvation Army of Greater New York’s Adult Rehabilitation Center (ARC) in Manhattan and provided first responders in Astoria Queens with meals during the 2006 eight-day blackout – and provided commuters with food and beverages during the huge MTA strike in 2005.

“We are here for the people, that's why this truck is here,” Watch said. “The question is what can people do for the Salvation Army now?”

To help the Salvation Army repair the vehicle, text “canteen” to 91999 to donate or visit salvationarmyny.org/canteen.