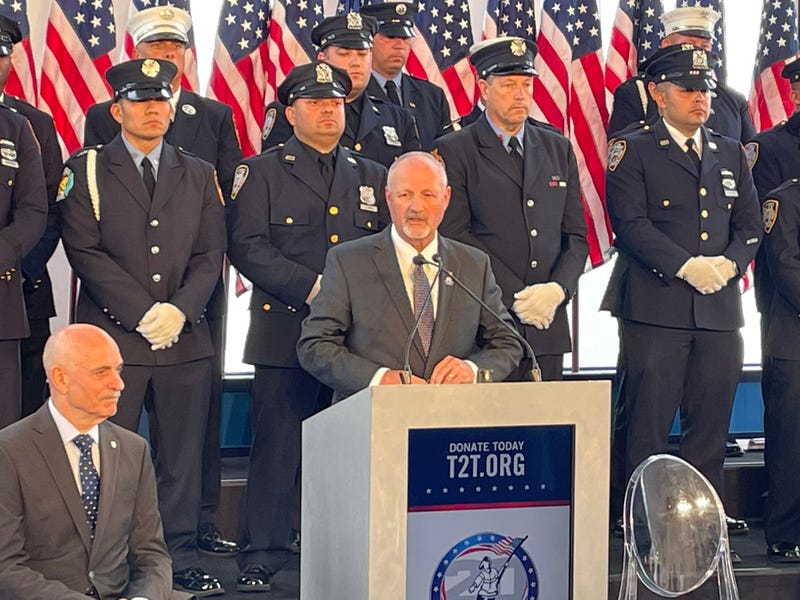 NEW YORK (WCBS 880) — A 9/11-related charity that has helped the families of fallen service members, cops and firefighters says it will now help the families of first responders who have died from 9/11 illnesses.

The Tunnel to Towers Foundation has always supported the families of firefighters and cops who die in the line of duty by helping to pay off their mortgages.

Now, that foundation says it will, for the first time, pay off the mortgages for first responders who lose their lives to 9/11-related illnesses and leave behind young children.

Frank Siller @Tunnel2Towers has announced the group will pay off mortgages of fallen first responders with young children, who die from 9/11-related illnesses. At least one kid must be 19 or younger. More than 2,000 who were sickened after 9/11 have since died. @wcbs880 pic.twitter.com/GchoHyIYrp

For widows like Erica Oelkers, whose husband Tom died in May, it means hope in a period of much uncertainty.

“It's overwhelming… it's a gift and we're so thankful for it,” she said.

Oelkers says she and her three daughters will now be able to stay in their Nassau County home after the Tunnel to Towers foundation stepped up to help.

“When Tom and I bought our home, we knew it would be our forever home. We dreamt of raising our three daughters there, growing old there, and watching our grandchildren there. While I am devastated that he is not here to enjoy that with us – I am thankful for this program that keeps this dream alive,” Oelkers said in a statement.

Tunnel to Towers CEO and Chairman Frank Siller says 9/11 first responders are heroes who deserved to be honored.

“Terrorists were responsible for killing 2,977 people on September 11. But they are also directly responsible for the deaths of thousands of people who died since, and for those who continue to lose their lives to 9/11-related illnesses,” said Siller. “We will not forget the brave men and women who worked tirelessly on the pile to help get America back on its feet.”

As the world approaches the 20th anniversary of the Sept. 11 attacks, Stiller says it is only appropriate that the foundation step up to help those dying of 9/11-related illnesses today.

“These men and women…had to pay the big price and their families have paid a big price because of it, I thought it was appropriate that this year we announce that we're gonna take care of these families,” Siller said.

The foundation has announced it will also pay off the mortgage for NYOD Sgt. Jeremiah Hunt’s family. He died of a 9/11-related cancer in August 2019.

His wife, Sarah Hunt, says the support is life changing.

“Tunnel to Towers' generosity has turned a very bleak outlook into one of hope for a much brighter future for our family,” she said in a statement. “I only wish Jerry could have known the great kindnesses that would be bestowed upon his family, it would have eased such a great worry and burden and put his mind at rest.”

The foundation says it will continue to help fallen first responders who leave behind a family with children younger than 19.