By Adam Warner and Sean Adams

NEW YORK (1010 WINS) -- Officer Jason Rivera, one of two NYPD cops killed in a Harlem ambush last week, was remembered at a funeral at St. Patrick’s Cathedral on Friday morning.

Rivera was just 22 years old and barely into his second year with the NYPD when he was fatally shot last week along with his partner, Officer Wilbert Mora, 27.

“Jason rose to every challenge that crossed his path. He was everything this city and the NYPD needed him to be,” Sewell said. 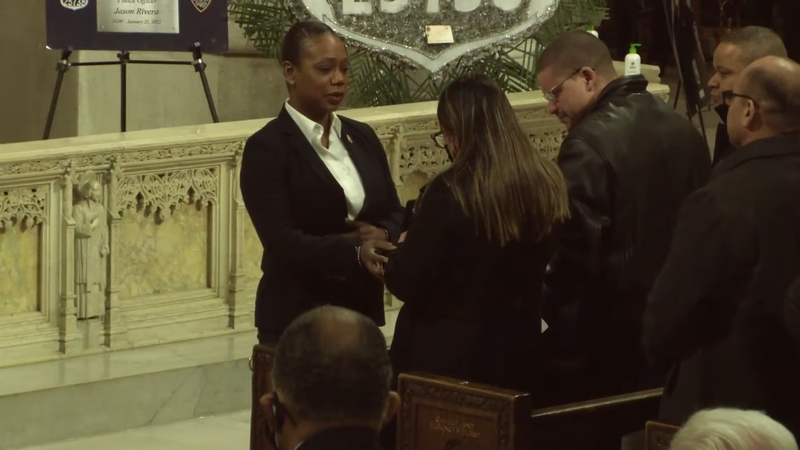 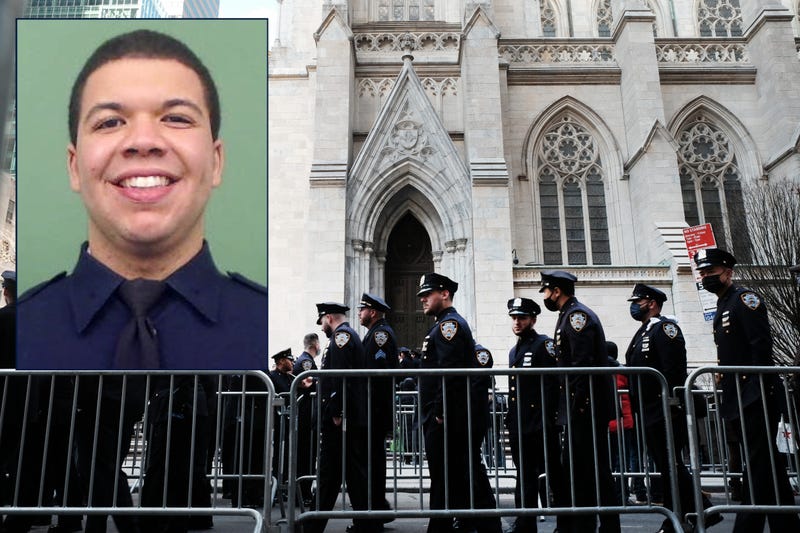 Police officers and members of the public line up to pay their respects to the fallen NYPD Officer Jason Rivera during his wake at St. Patrick's Cathedral on Jan. 27, 2022. Inset: Officer Rivera. Photo credit Spencer Platt/Getty Images

Mayor Eric Adams, a former NYPD officer, said he saw himself in Rivera, who aspired to bridge the gap between police and the communities they serve.

“He gave his life defending his fellow New Yorkers. That greater love unites us here today, standing side by side,” the mayor said.

Cardinal Timothy Dolan presided over the funeral Mass, which was attended by thousands of police officers from across the country, and from as far away as Europe and the Middle East.

Rivera’s brother, Jeffrey Rivera, remembered his younger sibling as someone who could “light up this whole church.” He said Rivera dreamed of being an officer since he was a young kid and would listen to police scanners late at night. 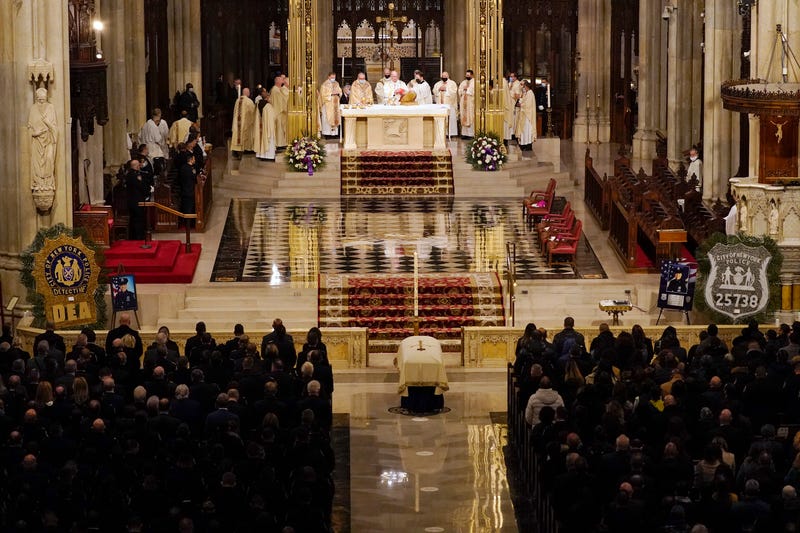 The younger Rivera married Dominique Luzuriaga just three months before he was killed.

In an emotional eulogy, Luzuriaga said she and her husband had been arguing the morning he was killed. Later in the day, she got a phone alert that two officers had been shot in Harlem and immediately texted him, “Are you okay?” But she didn’t hear back and eventually received a call to come to Harlem Hospital. 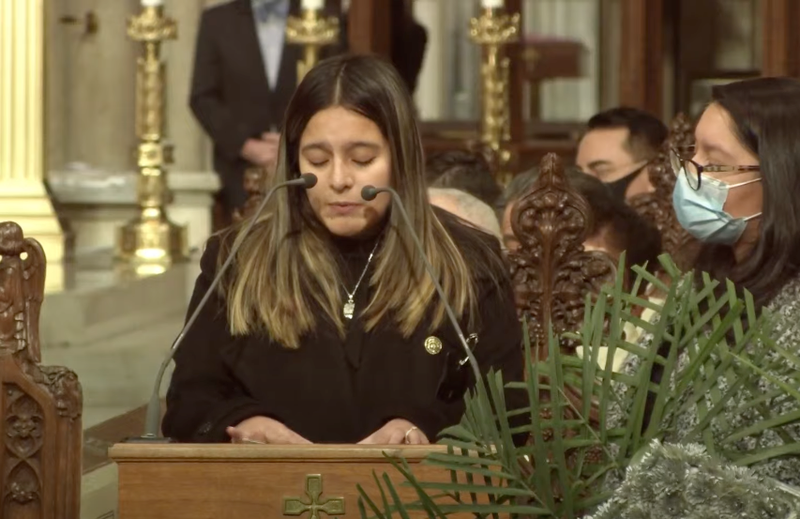 “Seeing you in the hospital wrapped up in sheets, not hearing me when I was talking to you broke me,” Luzuriaga said. “I asked, ‘Why?’ I said to you, ‘Wake up baby, I’m here.’ The little bit of hope I had that you would come back to life just to say goodbye or say, ‘I love you,’ one more time had left. I was lost. I’m still lost.”

“Today I’m still in this nightmare that I wish I’d never had, filled with rage and anger, hurt and sad—torn,” she said. “Although I gained thousands of blue brothers and sisters, I’m the loneliest without you.” 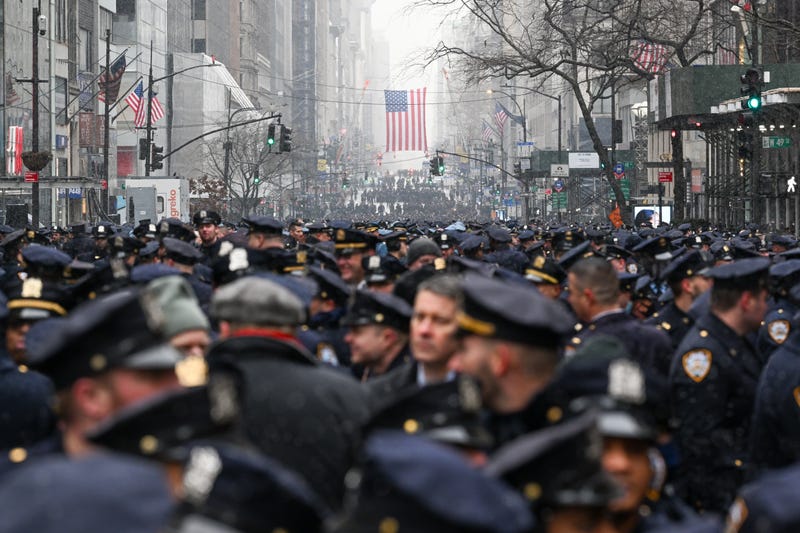 Luzuriaga said the “system continues to fail us” as she criticized criminal justice reform measures, including ones recently put forth by new Manhattan District Attorney Alvin Bragg.

“We are not safe anymore, not even the members of the service,” she said. “I know you were tired of these laws, especially the ones from the new D.A. I hope he’s watching me speak through you right now.”

.@NYCMayor’s eulogy for Officer Jason Rivera echoes down 5th Avenue through a sea of blue outside St. Pats @wcbs880 pic.twitter.com/VYeNtoBr5g

A funeral procession was transporting Rivera’s casket from Midtown Manhattan to Ferncliff Cemetery in Hartsdale, Westchester, where the fallen officer will be cremated and laid to rest.

On Thursday, nearly 2,000 people—from uniformed officers to ordinary citizens—came through St. Patrick’s every hour for Rivera’s wake. The line wrapped around the cathedral several times.

Rivera and Mora were fatally wounded last Friday evening by a gunman who ambushed them in a hallway as they responded to a family dispute on W. 135th Street in Harlem. Rivera died Friday and Mora died Tuesday.

The gunman, who was shot by a third officer, died earlier this week. Authorities are still investigating why he shot at the officers. 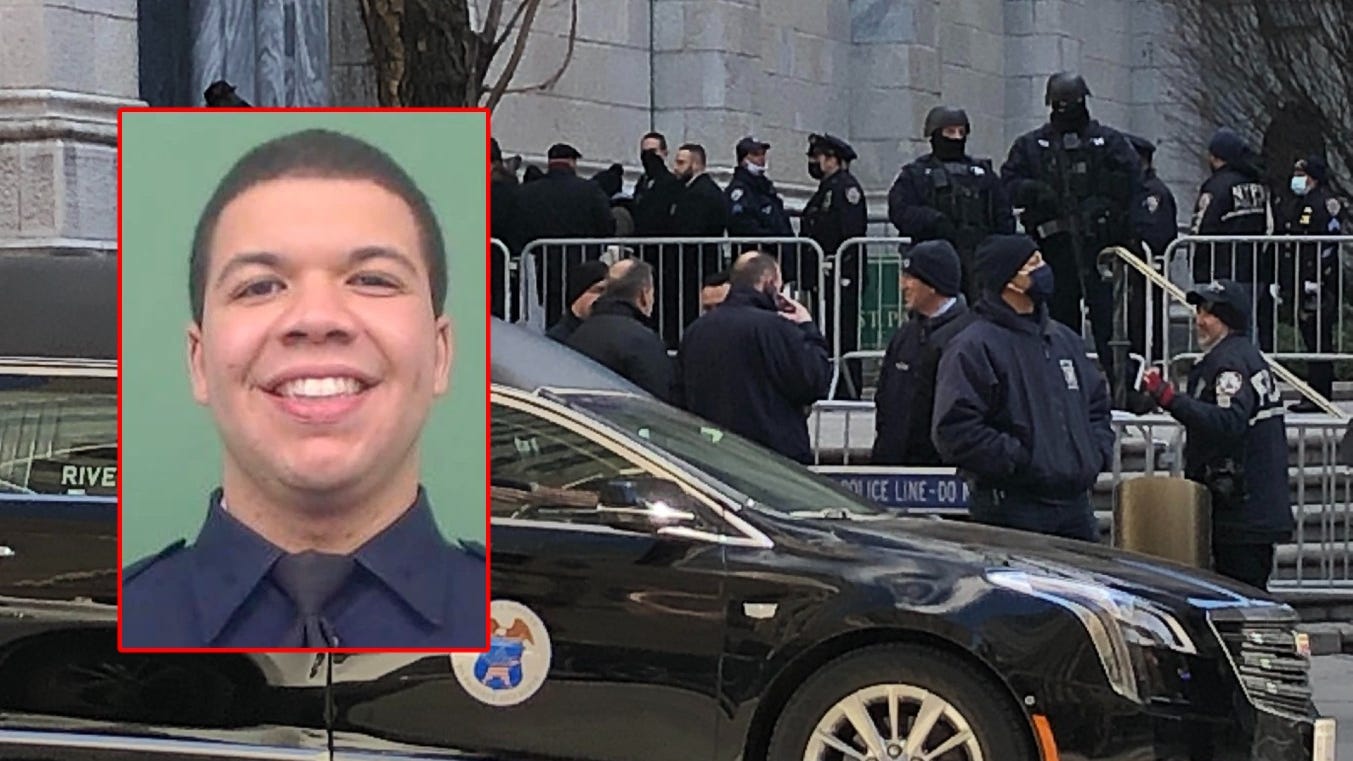 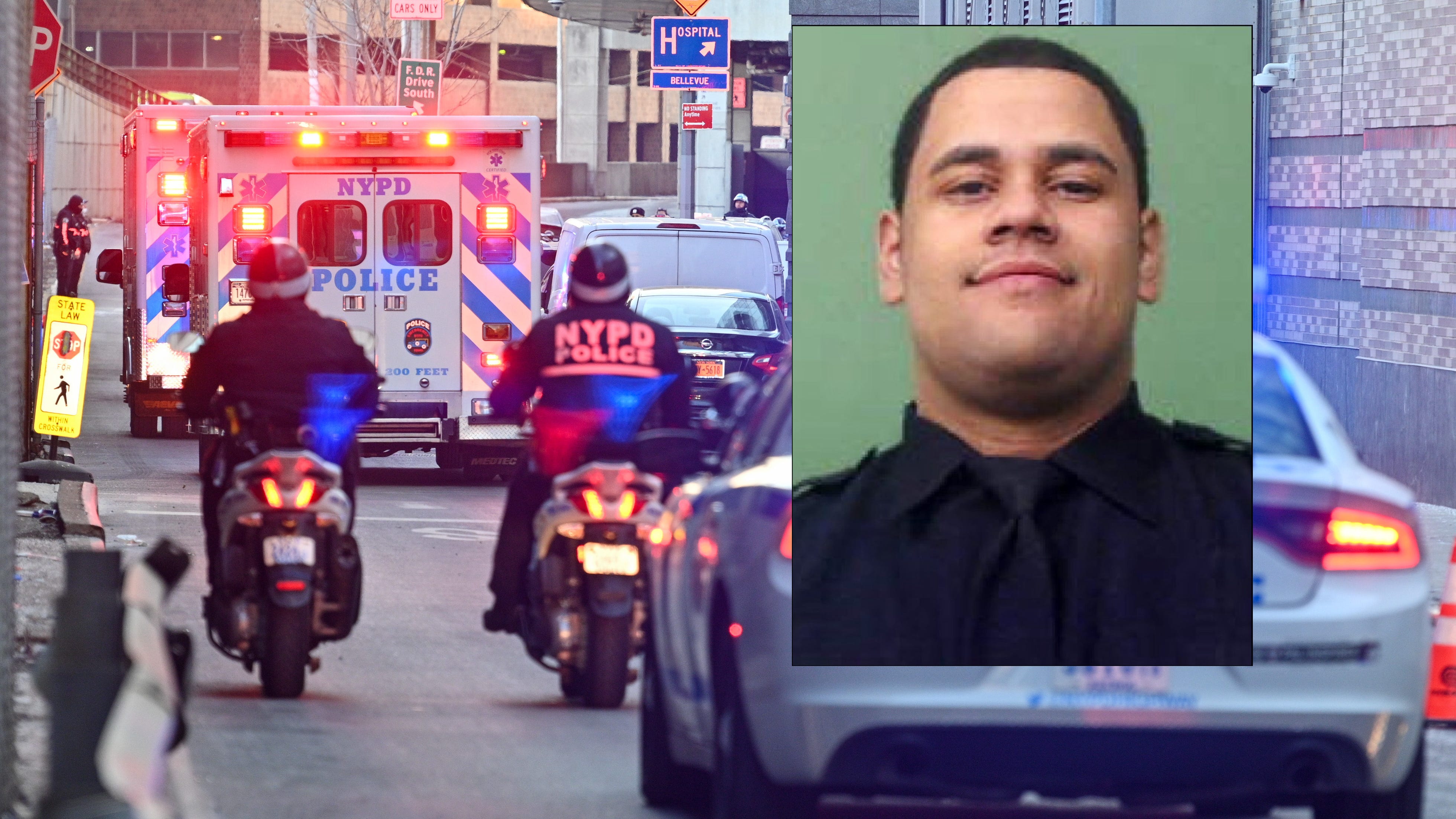