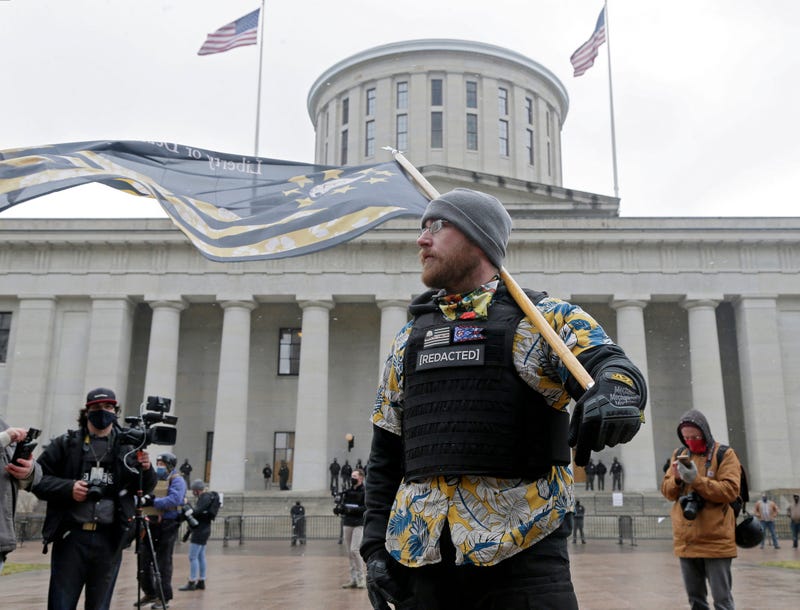 The Latest on demonstrating Sunday at statehouses across the country.

After a small, peaceful protest at the Ohio Statehouse on Sunday, Gov. Mike DeWine says security levels will remain high in Columbus for Wednesday’s presidential inauguration.

DeWine praised demonstrators for exercising their free speech rights in a way “that respected our Constitution and our more than 150-year-old state capitol building.”

But he said there remain concerns over potential violence in the coming days.

Low-key protests were common across the U.S. on Sunday as law enforcement braced for big rallies and possible violence from supporters of President Donald Trump who believe his false claims that he won the presidential election.

Many rallies had more law enforcement than demonstrators. In states from Maine to Mississippi to Nevada, there were no far-right demonstrators at all. Protesters in Kentucky, New Hampshire and Utah were armed but peaceful.

Washington State Patrol spokesman Chris Loftis said there might have been a cooling off across the country after a violent mob of Trump supporters stormed the U.S. Capitol on Jan. 6 to stop the Electoral College certification, leaving a Capitol Police officer and four others dead.

He said law enforcement will not let its guard down yet.

Some of the protests at statehouses have begun breaking up after drawing only modest crowds — in most places, no more than a couple dozen demonstrators.

Officials had fortified statehouses with extra police, National Guard troops and fencing after the FBI had warned about the possibility of armed demonstrations at all 50 state capitols.

Yet some had no demonstrators at all Sunday. The Nevada Capitol in Carson City was empty except for one person carrying a sign reading “Trump Lost. Be Adults. Go Home."

In Richmond, Virginia, police vehicles, dump trucks and orange barrels blocked streets around the Capitol, but there was no sign of demonstrations.

It was a similar story in Springfield, Illinois. Windows of the Capitol had been boarded up as a precaution amid fears of a gathering similar to the Trump rally that preceded the Jan. 6 insurrection at the U.S. Capitol, when a violent mob tried to stop the Electoral College certification for President-elect Joe Biden.

By mid-afternoon Sunday, only guards and state troopers remained around the Ohio Statehouse in Columbus, with the crowds dissipating before kickoff of the Cleveland Browns’ NFL playoff game.

Protesters also cleared out in the afternoon in Lansing, Michigan, where state police estimated they numbered only about 20. There were vastly outnumbered by law enforcement and media.

Some counter-protesters have begun showing up outside statehouses to send a message against the far-right groups that have threatened to disrupt the inauguration of President-elect Joe Biden.

In Columbia, South Carolina, a group of about half a dozen people stood on the opposite side of the Statehouse lawn from pro-Trump protesters, with one holding a sign that read: “What are you so PROUD of, BOYS?” It was a reference to the far-right group Proud Boys. The groups did not appear to be interacting.

In Harrisburg, Pennsylvania, Stephen Rzonca, who lives a few minutes from the state Capitol, said he came to greet any possi