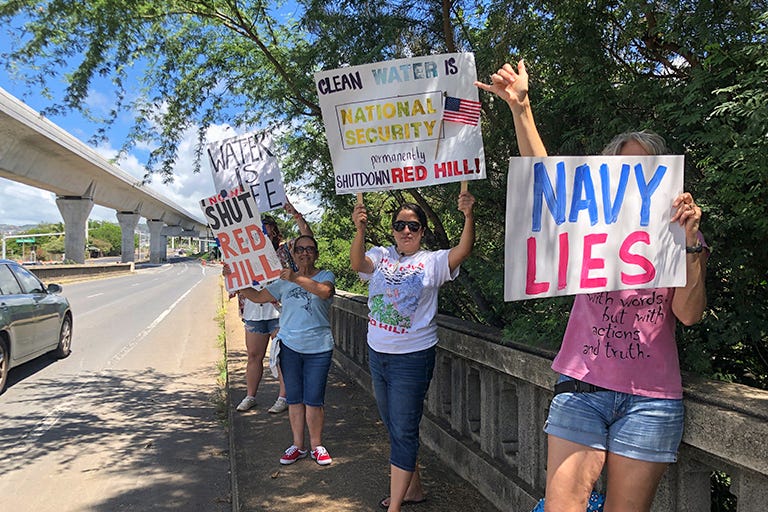 Austin traveled to the Red Hill Bulk Fuel Storage Facility in the hills above Pearl Harbor on Friday and met the commander of the joint task force in charge of draining its tanks so it can be shut down.

He also met with several families affected by the fuel spill and Hawaii state officials, the military said in a news release. The meetings were closed to the media, and Austin didn't hold a news conference afterward.

Outside Joint Base Pearl Harbor Hickam, several dozen protesters held signs saying “Navy Lies” and “Shut Down Red Hill.” People driving by — including many exiting the base — honked in support.

Samantha McCoy, whose husband is in the Air Force, said her family suffered migraines, rashes, skin sores and gastrointestinal problems that only subsided when they moved out of military housing last month.

She called on Austin to make more medical care available to families.

“It took four months of daily migraines to even get a referral to a neurologist. And that’s really unacceptable,” she said at the protest.

Cheri Burness, who lives in Navy housing, won’t drink the tap water in the house she shares with her sailor husband and their two teenage children because she doesn’t believe that it’s safe 10 months after the spill.

Her family has spent $3,000 of their own money to install filters on all the faucets in the house so they can bathe, brush their teeth and wash their dishes. She spends $70 to $100 a month to have water delivered to their home for drinking. They also use bottled water.

She recalled how Navy leaders initially told Pearl Harbor water users their water was safe to drink after the November spill. The Navy only told people to stop drinking their tap water after the state Department of Health stepped in.

The Navy later flushed clean water through its pipes to cleanse them. In March, the state Department of Health said the tap water in all residential areas served by the Navy’s water system was safe to drink.

But Burness said she never got to see the reports for her house after it was tested. She was only told her water was good.

“I don’t trust them because cause they did nothing to show me that it ever was fine,” Burness said in a telephone interview.

A Navy investigation released in July showed a cascading series of errors, complacency and a lack of professionalism led to the fuel spill, which contaminated tap water used by 93,000 people on the Navy's water system.

Nearly 6,000 sought medical attention for nausea, headaches and rashes. Some continue to complain of health problems.

The military put families up in hotels for several months, but stopped paying once the health department cleared people to resume drinking their tap water.

Kristina Baehr, an attorney with Texas-based Just Well Law, sued the federal government last month on behalf of four families but said she will be adding more individuals from among the 700 clients she represents. Burness and McCoy are among her clients.

“They didn’t warn them to stop drinking it, and 6,000 people went to the emergency room,” she said. “Then, many of these people have only gotten sicker over time.”

Baehr said her clients were not among those chosen to speak to Austin. If they had such an opportunity, she said they would tell him to have officials stop saying no one is medically affected by the spill and that there are no long-term effects.

They would also encourage him to provide appropriate medical care to families, safe housing because families claim the homes were not properly remediated, and compassionate reassignment to other bases to all those who ask.

Dani Espiritu, who was also at Friday's protest, said the military was taking risks with Native Hawaiian lives, land and culture.

“All of our cultural practices are tied to aina,” she said, using the Hawaiian word for land. “And so as you poison aina and jeopardize the health and well-being of communities, you are also jeopardizing every traditional practice that are tied to those places.”

The military plans to drain fuel from the tanks by July 2024 to comply with a Hawaii Department of Health order to shut down the facility.

Honolulu's water utility and the Sierra Club of Hawaii have expressed concerns about the threat Red Hill poses to Oahu's water supply ever since 2014, when fuel leaked from one of the storage tanks. But the Navy reassured the public that their water was safe and that it was operating the storage facility properly.