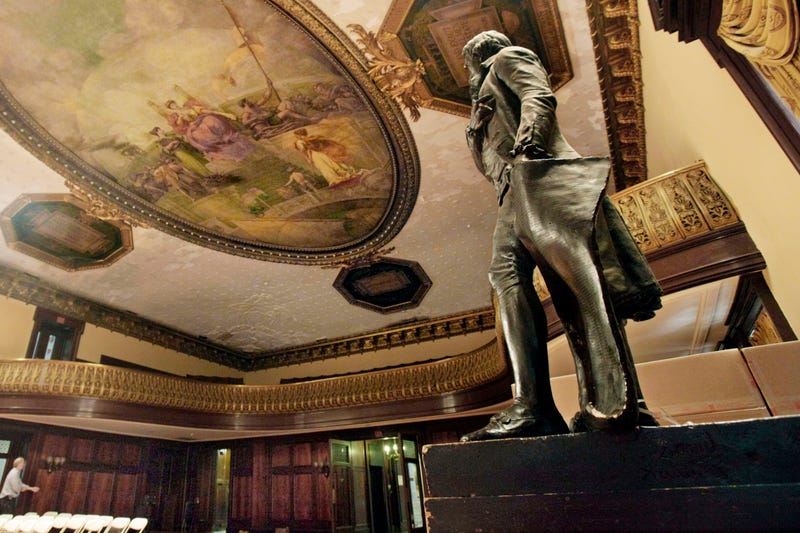 NEW YORK (AP) — An 1833 statue of Thomas Jefferson will be removed from New York's City Council chamber by the end of the year, a little-known city commission voted Monday, but it's unclear where it will go.

Some members of the 51-member New York City Council have called for years for the statue to be removed from the room where they conduct business because Jefferson was a slaveholder.

The Public Design Commission held off on approving a plan to send the statue to the New-York Historical Society as a long-term loan after some participants at a virtual public hearing said it should be moved to a different room in City Hall instead.

“I think he should stay in the seat of government in a public space,” said Raymond Lavertue, a historian who is a fellow at the Rothermere American Institute at Oxford. “I think Jefferson needs to be grappled with.”

The Jefferson statue is a plaster model of the statue by French sculptor Pierre-Jean David d'Angers that stands in the Capitol rotunda of the U.S. Congress.

State Assembly Member Charles Barron, a Democrat who first demanded the statue’s removal in 2001 when he was on the City Council, said at the Zoom public hearing that Jefferson was “a slaveholding pedophile who should not be honored with a statue.”

Barron was referring to historical evidence that Jefferson fathered at least six children with Sally Hemings, an enslaved woman who was his late wife’s half sister. The sexual relationship between Jefferson and Hemings, now generally accepted as a fact by historians of the era, began when Hemings was in her teens.

The plan to loan the statue to the New-York Historical Society for safekeeping and future display had seemed to be a done deal, but some members of the commission said sending a piece of public art to a private museum that charges admission would set a bad precedent.

“It is a piece of public art. It is under our jurisdiction. And we need to be thoughtful about where it should go,” said board president Signe Nielson.

A group of historians including Sean Wilentz, author of books including “No Property in Man: Slavery and Antislavery at the Nation’s Founding,” argued in a letter to the Public Design Commission that the statue should be moved to the Governor's Room in City Hall, its original home. The statue has been in the City Council chamber since 1915.

“Locating the statue for viewing in the Governor’s Room, where it was originally placed and apparently stood for much of its history,