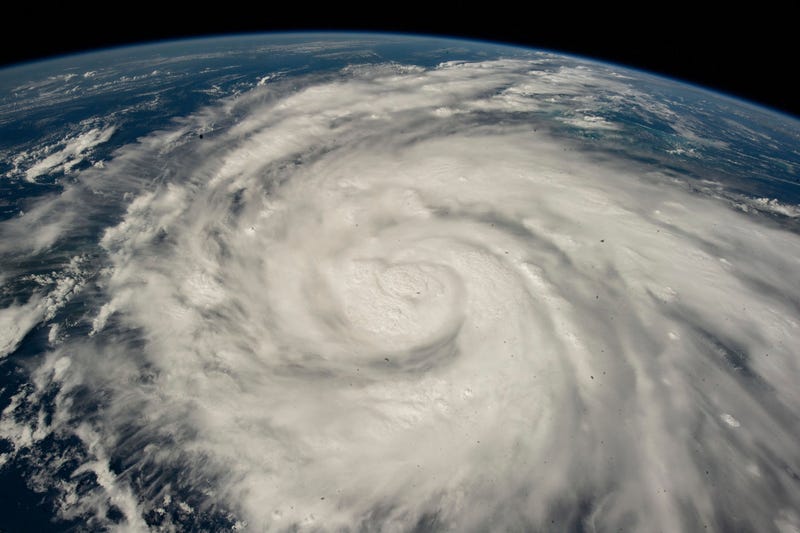 This Satellite image provided by NASA on Sept. 26, 2022, shows Hurricane Ian pictured from the International Space Station just south of Cuba gaining strength and heading toward Florida. Photo credit NASA via AP
By The Associated Press and WCBS 880 Newsroom

NEW YORK (AP/WCBS 880) -- Hurricane Ian's most damaging winds began hitting Florida's southwest coast Wednesday, lashing the state with heavy rain and pushing a devastating storm surge of up to 18 feet after strengthening to just shy of the most dangerous Category 5 status.

The National Hurricane Service downgraded Hurricane Ian, which made landfall as a Category 4 storm, to a Category 2 storm with maximum sustained winds around 105 mph. 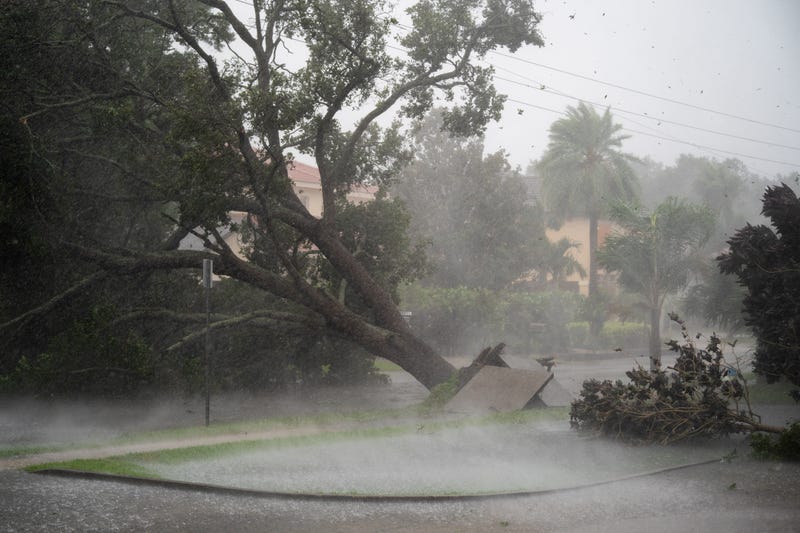 A tree is uprooted by strong winds as Hurricane Ian churns to the south on September 28, 2022 in Sarasota, Florida. The storm made a U.S. landfall at Cayo Costa, Florida this afternoon as a Category 4 hurricane with wind speeds over 140 miles per hour in some areas. Photo credit Sean Rayford/Getty Images

8:29 p.m. - Hurricane Ian was downgraded to a Category 3 storm as almost 2 million Floridians were left without power

The National Hurricane Service downgraded Hurricane Ian from a Category 4 storm to a Category 3 storm with maximum sustained winds around 125 mph.

Storm surges have reached up to 12 feet in some areas, according to Florida Gov. Ron DeSantis.

Meanwhile, over 1.8 million Floridians are without power, according to PowerOutage.us. Most of the outages are along Florida's Southwestern coast — where the storm made landfall.

7:06 p.m. - Virginia declares state of emergency in anticipation of Ian

Virginia Gov. Glenn Youngkin declared a state of emergency on Wednesday ahead of Hurricane Ian's arrival.

The National Hurricane Service predicted the storm would bring heavy winds, rain and storm surges up the East Coast as it moves north.

“Hurricane Ian is a large, powerful storm, and current predictions indicate that it may impact parts of Virginia later this week into early next week,” said Youngkin. “We want to ensure that our communities have the resources needed to respond to and recover from any potential effects from the storm. While we recognize that the storm track is still uncertain, I nevertheless encourage all Virginians and visitors to make a plan, have supplies on hand, and follow official sources for the latest forecast information and guidance. Suzanne and I will be praying for those in Florida in the path of the storm.” 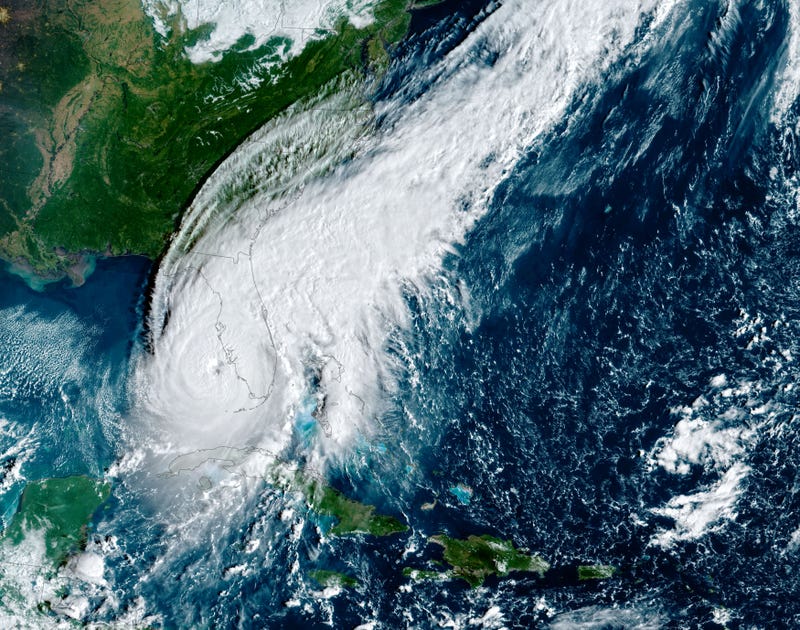 In this NOAA handout image taken by the GOES satellite at 13:10 UTC, Hurricane Ian approaches Florida on September 28, 2022 in the Gulf of Mexico. The storm is expected to bring a potentially life-threatening storm surge and hurricane-force winds. Photo credit NOAA via Getty Images

5:33 p.m. - Ian continues to batter Florida as other states prepare

Maximum sustained winds at this landfall are estimated at 145 mph.

Meanwhile, the governors of both North and South Carolina have declared states of emergency as they ready their storm responses.

The National Hurricane Service has issued a steady stream of warnings and watches for the Carolinas.

The National Hurricane Center said Hurricane Ian has made landfall as an "extremely powerful" Category 4 storm near Cayo Costa, Florida, with maximum sustained winds at 150 mph.

About 2.5 million people were ordered to evacuate southwest Florida before the storm hit the coast with maximum sustained winds of 150 mph (241 kph). It was heading inland, where it was expected to weaken, at about 9 mph (14 kph), but residents in central Florida could still experience hurricane-force winds.

2 p.m. - Ian churns along Florida coast, has yet to make landfall

Ian’s center was about 35 miles west of Fort Myers at 1 p.m. Wednesday, as it churned toward toward the coast at 9 mph.

The storm’s plodding pace meant it was expected to spend a day or more crawling across the Florida peninsula, dumping flooding rains of 12 to 18 inches across a broad area including Tampa, Orlando and Jacksonville in the state’s northeast corner.

The National Hurricane Center said at 2 p.m. that Ian was causing catastrophic storm surge, winds and flooding across the Florida peninsula. 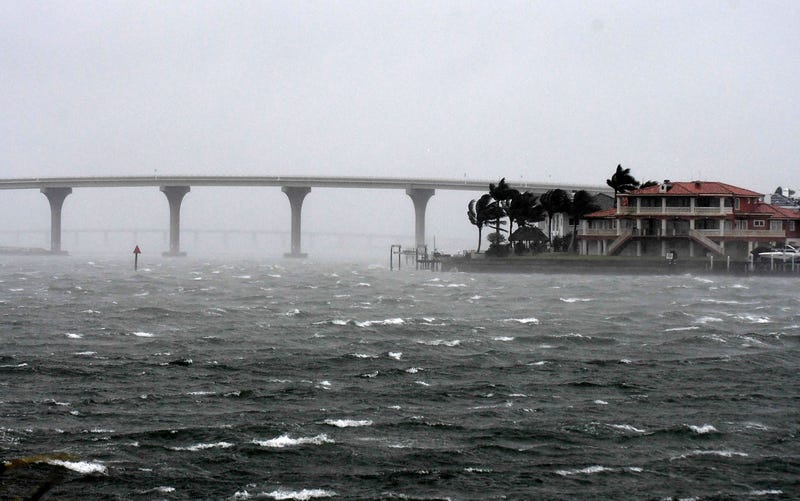 Forecasters predicted Ian would make landfall more than 100 miles south of Tampa and St. Petersberg, likely sparing the densely populated Tampa Bay area from its first direct hit by a major hurricane since 1921. 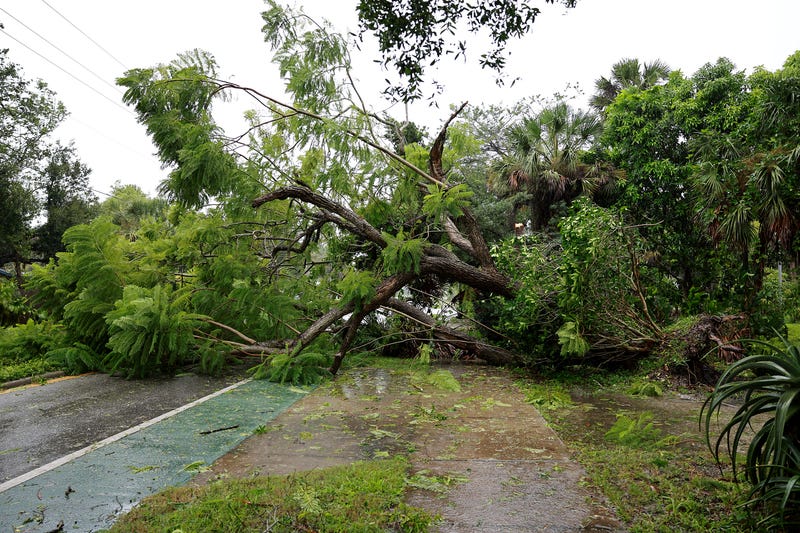 A downed tree covers the road after being toppled by the winds and rain from Hurricane Ian on September 28, 2022 in Sarasota, Florida. Photo credit Joe Raedle/Getty Images

But the National Weather Service warned the "monstrous" hurricane would bring devastating flooding and winds to a swath of Florida, with a Hurricane Warning stretching from Fort Myers all the way to Orlando and the state's Atlantic coast. The eyewall was moving on shore at Sanibel and Captiva islands around 12 p.m.

Around 12 p.m., the eyewall was moving on shore at Sanibel and Captiva islands near Fort Myers. Off the coast of Sanibel, swirling water covered residential streets and was halfway up mailbox posts. Seawater rushed out of Tampa Bay, leaving parts of the muddy bottom exposed, and waves crashed over the end of a wooden pier at Naples.

The storm still has maximum sustained winds of 155 mph, making it 2 mph shy of a Category 5 storm. Officials warned of "catastrophic" storm surge and "destructive waves" along the southwest Florida coast, from Englewood to Bonita Beach. 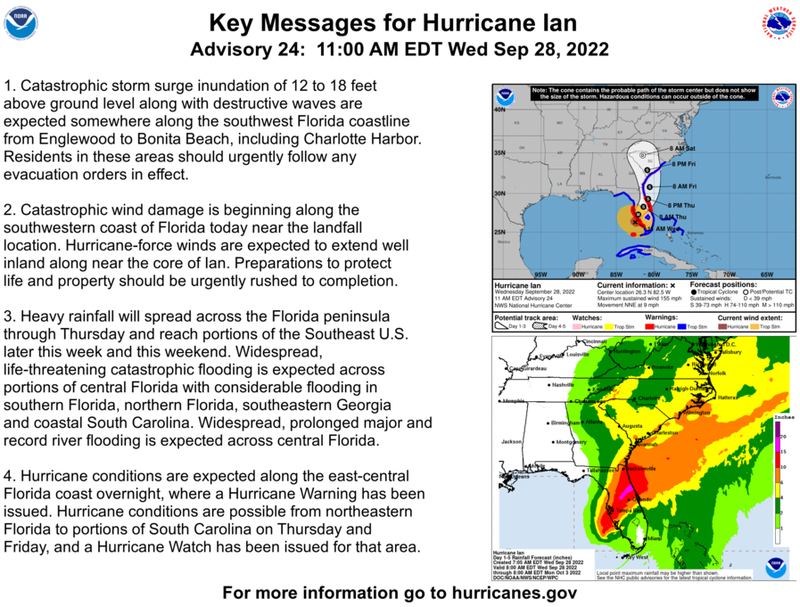 LISTEN TO HURRICANE COVERAGE ON WCBS 880

Governor DeSantis Meets with Linemen Ahead of Hurricane Ian https://t.co/oHuRvpkL6N

“If you are in any of those counties it is no longer possible to safely evacuate. It’s time to hunker down and prepare for the storm," DeSantis said. “Do what you need to do to stay safe. If you are where that storm is approaching, you’re already in hazardous conditions. It’s going to get a lot worse very quickly. So please hunker down."

The governor said the state has 30,000 linemen, urban search and rescue teams and 7,000 National Guard troops from Florida and elsewhere ready to help once the weather clears.

“The assets we have are unprecedented in the state’s history and, unfortunately, they’ll need to be deployed,” DeSantis said. 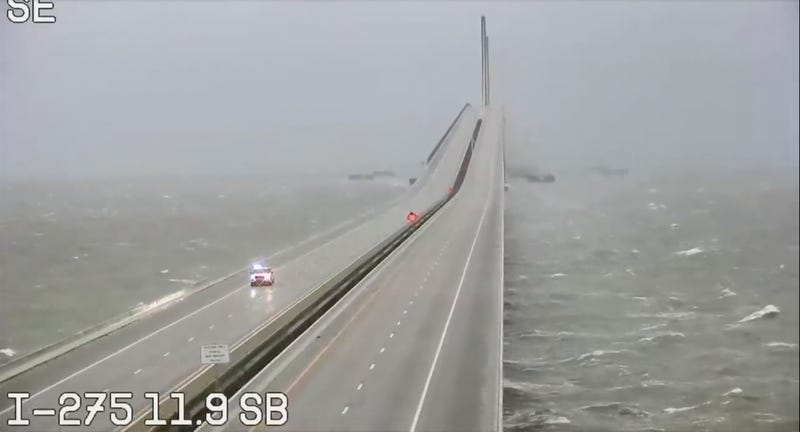 This image provided by FLDOT shows an emergency vehicle traveling on the Sunshine Skyway over Tampa Bay, Fla., on Wednesday, Sept. 28, 2022. Photo credit FDOT via AP

Time is quickly running out for residents to rush preparations to completion on the southwestern Florida peninsula as Hurricane #Ian nears.

“Time is quickly running out for residents to rush preparations to completion on the southwestern Florida peninsula as Hurricane Ian nears,” the Miami-based National Weather Service division tweeted Wednesday morning.

Overnight, Hurricane Ian went through a natural cycle when it lost its old eye and formed a new eye. The timing was bad for the Florida coast, because the storm got stronger and larger only hours before landfall. Ian went from 120 mph to 155 mph in just three hours, the second round of rapid intensification in the storm’s life cycle.

The precise location of landfall remains uncertain, but with Ian's tropical storm-force winds extending 175 miles from its center, flash floods were possible across the whole state. 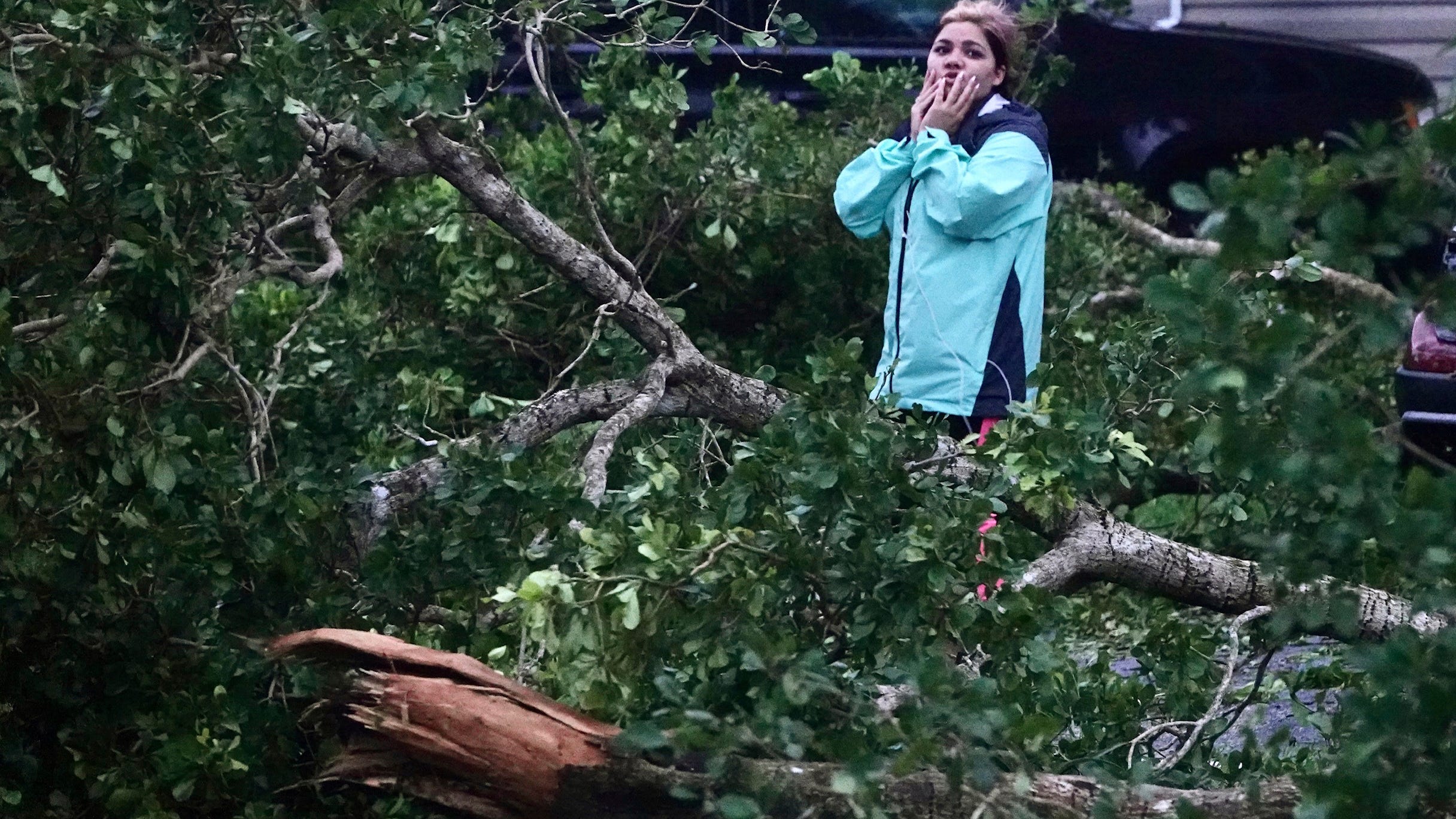 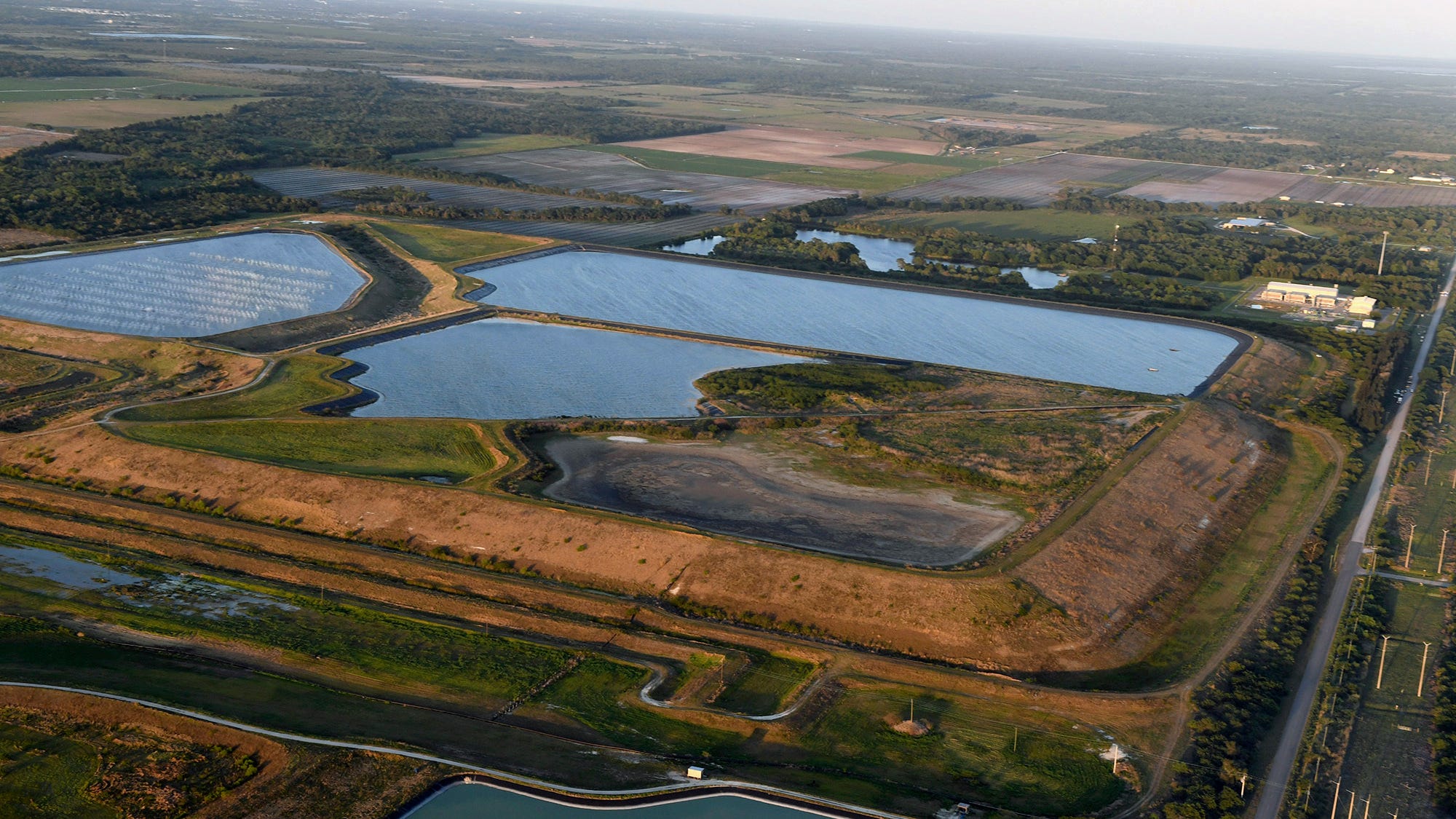 Pollution from Florida mining a concern with Hurricane Ian 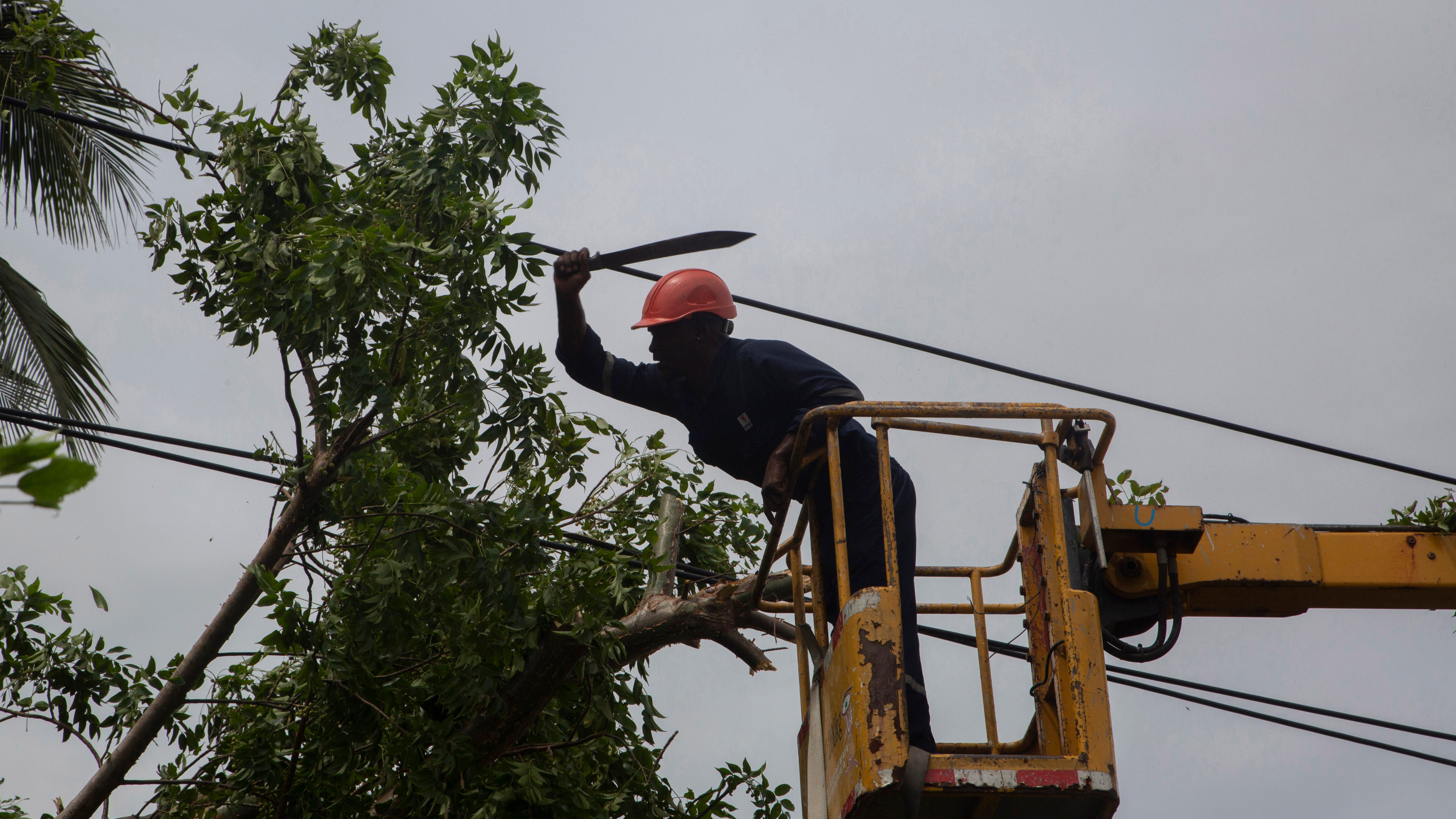