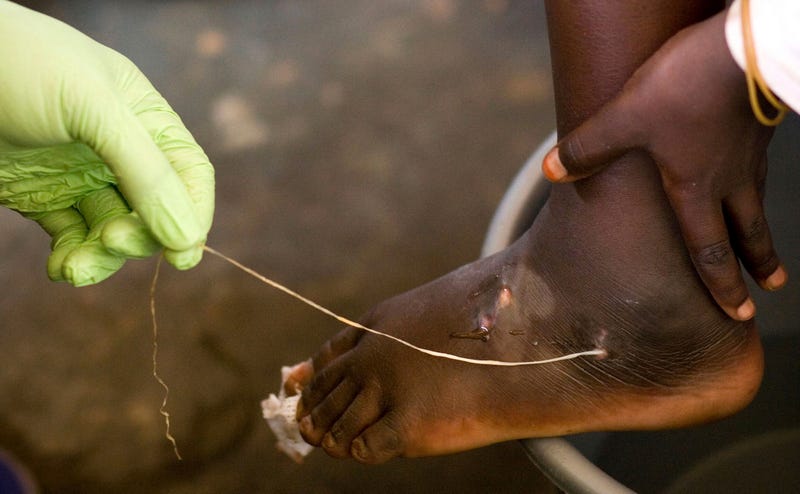 The Carter Center reported Wednesday that only 14 human cases of Guinea worm disease were reported in all of 2021, the result of years of public health campaigns to improve access to safe drinking water in Africa. People who drink unclean water can ingest parasites that can grow as long as 3 feet (a meter) before painfully emerging from the skin.

That's a decline of nearly half compared to the previous year, when 27 cases were reported in seven African countries. And it's a staggering drop from when The Carter Center began leading the global eradication effort in 1986, when the parasitic disease infected 3.5 million people. Carter, 97, has made eradicating the disease one of his many missions.

“To say that we only have 14 human beings on a planet of almost 8 billion people is quite a phenomenal track record for the Guinea worm program,” Adam Weiss, director of The Carter Center’s Guinea Worm Eradication Program, told The Associated Press.

Guinea worm infections in animals, such as dogs and cats, also declined 45% last year compared to 2020. That's important, Weiss said, because infected pets and domesticated animals can play a role in passing the disease to people.

Guinea worm affects some of the world's more vulnerable people and can be prevented by training people to filter and drink clean water.

The 3-foot-long worm incubates in people for up to a year before painfully emerging, often through the feet or other sensitive parts of the body.

Guinea worm isn't fatal by itself. But according to the U.S. Centers for Disease Control and Prevention, it's a painful and debilitating disease that can leave infected people unable to work until an emerging worm is removed – a slow process that can take weeks.

Only one human disease has ever been successfully eradicated: smallpox. The World Health Organization warns that the remaining cases can be the most difficult to control as they usually occur in remote and often inaccessible areas.

This story has been corrected to show that the four countries that had human cases of Guinea worm disease in 2021 were Chad, South Sudan, Ethiopia and Mali.