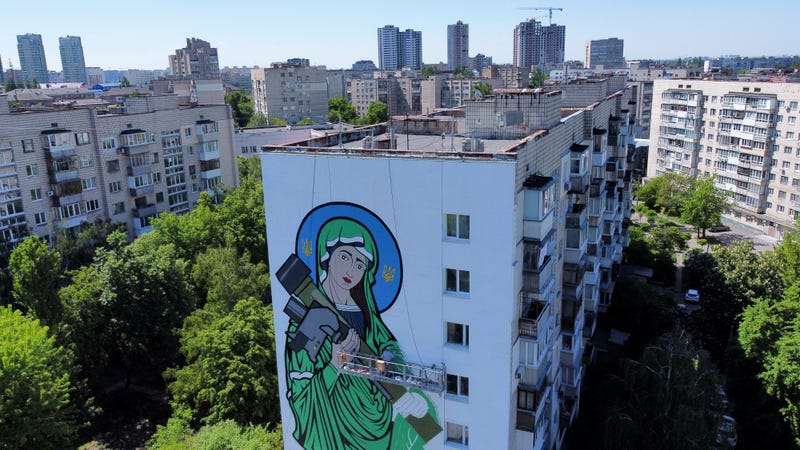 KRAMATORSK, Ukraine (AP) — Piano music wafted from an apartment block on a recent spring evening in Kramatorsk, blending with distant artillery fire for a surreal soundtrack to a bomb-scarred neighborhood in the eastern Ukrainian city.

Everywhere in Ukraine, the 3-month-old war never seems to be far away.

Those in towns and villages near the front lines hide in basements from constant shelling, struggling to survive with no electricity or gas — and often no running water.

But even in regions out of the range of the heavy guns, frequent air raid sirens wail as a constant reminder that a Russian missile can strike at any time — even for those walking their dogs, riding their bicycles and taking their children to parks in cities like Kyiv, Odesa and Lviv.

Curfews, checkpoints and fortifications are commonplace. So are fresh cemeteries, uprooted villagers and war-scarred landscapes, as Moscow intensifies its attacks in eastern and southern Ukraine.

“City residents are trying to return to regular life, but with every step, they stumble upon either a crater or a ruined house or a grave in the yard,” said Andriy Pustovoi, speaking by phone to The Associated Press from the northern city of Chernihiv. “No one is cooking food over a bonfire or drinking water from a river anymore, but there's a long way to go to a normal life.”

Chernihiv was in the way of Russian forces as they advanced toward Kyiv early in the war. It was heavily bombarded, and Mayor Vladyslav Atroshenko said about half of its buildings were damaged or destroyed. At least 700 residents were killed, and part of a city park now holds a cemetery, where some of them are buried.

Its streets are mostly empty now, half of the shops have not reopened and public transportation is not working properly, said Pustovoi, a 37-year-old engineer.

Rail service to Kyiv was only restored this month, but people who fled are in no rush to return.

“The scariest thing is that neighboring Russia and Belarus are not going away from Chernihiv, which means that some of the residents that left when the war started may not come back,” Atroshenko said sadly.

Few people are seen on the streets of Kramatorsk, where storefront windows are boarded up or protected by sandbags, and it's no wonder.

The eastern city has been hit several times, with the deadliest attack on April 8, when a missile struck near its train station where about 4,000 people had gathered to be evacuated before fighting intensified. In an instant, the plaza was turned into a scene of horror, with bodies lying on bloodstained pavement amid discarded luggage. A total of 57 people were killed, and over 100 wounded.

Kramatorsk is one of the largest in the industrial Donbas region of eastern Ukraine that has not been taken over by Russian forces. The region has been the site of battles between Moscow-backed separatists and Ukrainian government forces since 2014.

Elsewhere in the Donbas, the picture is even bleaker.

Ryisa Rybalko fled the village of Novomykhailivka, where she had been living first in a basement and then a bomb shelter at a school because of frequent shelling.

“We haven’t been able to see the sun for three months. We are almost blind because we were in darkness for three months,” Rybalko said. She arrived with her family in the town of Kiurakhove, driven by a fellow villager, and waited on Monday for a westbound bus.

Her son-in-law, Dmytro Khaliapin, said their village was pounded by artillery.

“Houses are ruined. It's a horror,” he said.

“Ashes, ruins. The northern parts, the southern parts, all are ruined,” she said Sunday as she sat on a train heading west from the town of Pokrovsk. “Literally everything is on fire: houses, buildings, everything.”

Chuhay and others from Lyman said much of the town was reduced to rubble by the bombardment. Anyone still there is hiding in shelters because it is too dangerous to venture out.

“They ruined everything,” said Olha Medvedeva, sitting opposite Chuhay on the train. “The five-story building where we were living, everything flew away — the windows, the doors.”

In cities farther from the front lines, air raid sirens sound so often that few pay attention and continue about their daily business.

After Russian forces failed to capture Kyiv in the opening weeks of the invasion and withdrew to the east, residents started to flow back into the capital. The nightly curfew has been cut by an hour, and public transportation started running longer to accommodate passengers.

Residents face long lines at gas stations, and the Ukrainian currency, the hryvnya, has weakened from 27 to the dollar at the start of the war to 37.

“Ukraine is being destroyed — not just by Russian bombs and missiles,” said Volodymyr Sidenko, an analyst at the Kyiv-based Razumkov Center think tank. “The fall in GDP (gross domestic product) and the sharp reduction in the revenue side of the budget have already been felt by every Ukrainian today. And this is just the beginning.”

But the National Opera resumed performances last week in Kyiv, with the audience advised how to reach the air raid shelter. No Russian operas are on the program.

And some restaurants, cafes and shops in cities such as Odesa and Zaporizhzhia have reopened.

Lviv, the city in western Ukraine about 45 miles (70 kilometers) from the Polish border, has been inundated with more than 300,000 people fleeing the war. About 1,000 arrive at its railway station daily.

“We judge the intensity of the fighting in the east not by (what) the news says but by waves of refugees, which have been growing in recent weeks again," said Alina Gushcha, a 35-year-old chemistry teacher who volunteers at the rail station to help arrivals.

Hotels, campgrounds, universities and schools ran out of space long ago, and the city has built temporary housing that resembles shipping containers in city parks.

“In the months of the war, I've learned to be happy about every day without shelling and bombardment,” said Halyna Shcherbin, 59, outside her container-like home in Stryiskyi Park, where she lives with her daughter and two granddaughters. That gratitude is perhaps linked to the fact that they left Kramatorsk the day before the deadly missile attack.

Lviv also comes under regular Russian bombardment because it's the gateway for Western military aid. Its Old Town architectural treasures, including the Boim Chapel and the Latin Cathedral, are protected by either metal shielding or sandbags.

In cities and towns of southern Ukraine, not far from the Crimean Peninsula that Moscow annexed in 2014, the war continues to flare with regularity.

Parts of the city of Mykolaiv often come under attack, and its streets are mostly empty and businesses closed. In some neighborhoods, the scars of war are clear, with blast marks on sidewalks, burned-out stores and shrapnel embedded in walls. The Russian-occupied city of Kherson is only 58 kilometers (36 miles) to the east.

In the village of Velyka Kostromka, south of the city of Kryvy Rih, the remaining residents try to go on with life despite the occasional shelling.. At least 20 houses were damaged on a recent morning, including three that were destroyed. A woman and her three children narrowly escaped with their lives.

Hours later, a farmer was back in his potato field, surveying a small crater left behind. With barely a shrug, he raked over it.

Follow the AP’s coverage of the war at https://apnews.com/hub/russia-ukraine