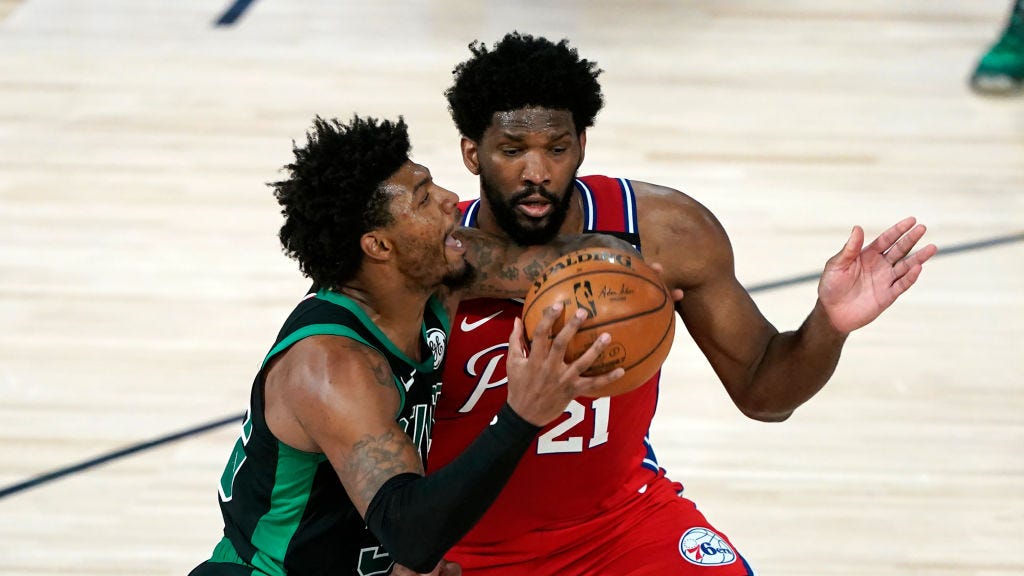 But regarding the foul he received at the hands — at both hands — of LeBron James on Wednesday night, there was no debate. There was no way he could have possibly flopped. And he's lucky that the fallout wasn't worse.

Joel Embiid was visibly in pain and went down hard on his back after being fouled.

LeBron was called for a flagrant 1 and Embiid stayed in the game. pic.twitter.com/LSOVsgVy5f

After the game, Embiid voiced his displeasure with the fact that LeBron was only tagged with a flagrant 1, and not more.

"First of all, I mean, you look at it, that's a very dangerous play," Embiid said (via ESPN). "I guarantee you that if it was me, I would have probably been ejected from the game, which has happened in the past with me getting flagrant fouls really for nothing."

Speaking of Embiid "getting flagrant fouls really for nothing," — his words, not mine — the officials issued a flagrant 1 just over a minute later when Embiid elbowed Anthony Davis.

Seconds after LeBron was called for a flagrant on Embiid, Joel gets his own flagrant for the elbow on Anthony Davis 😳pic.twitter.com/jVRiogMXIo

I don't think either was intentional, but I also agree with Embiid's logic that these two fouls logically shouldn't be ruled under the same generic label. They, to my eyes, seem very different, and I think that a common foul would have been the best route to go with on the second one. I've always wanted to bring up this issue I have, and now seems like a good time: it's kind of like how a Millennial is a person that is born in 1981 and a Millennial is also a person that is born in 1996. That's just too broad a label to apply to those two specifics.

That was Embiid's logic as well.

"When you compare that to the one that I got, which I thought I didn't really hit him, I didn't elbow him," Embiid explained. "I might have touched him, but I don't think it deserved the flagrant, if you're gonna compare those two."

What's more important than all of this, in the grand scheme of things, is the health of Embiid, who had another MVP-type performance (28 points, 6 rebounds, 4 assists, 2 blocks) and added a new layer of legitimacy to the Sixers' title contention. Following the foul, Embiid looked like he was moving noticeably more gingerly, and he blamed his team's near collapse — they allowed a 13-0 run with just minutes to spare — on himself, saying that his back "just didn't allow [him] to dominate."

Thanks to Tobias Harris, though, that skid ultimately didn't result in a Lakers victory.

Big time shot and a great win. WE MOVE #24 pic.twitter.com/UG5KF5Fg5H

music
Pearl Jam is unleashing an archive of almost 200 live shows
news
Barbie upgrades to a swank party pad in brand new DreamHouse
music
Read the just released FBI records related to Kurt Cobain’s death
i'm listening
How Nancy Wilson’s childhood experiences helped her mental health during the pandemic
music
Mike Epps on his U.S. Tour: 'It's time for us to get out and laugh'
music
Dropkick Murphys join the Boston Pops for a special Mother's Day tribute