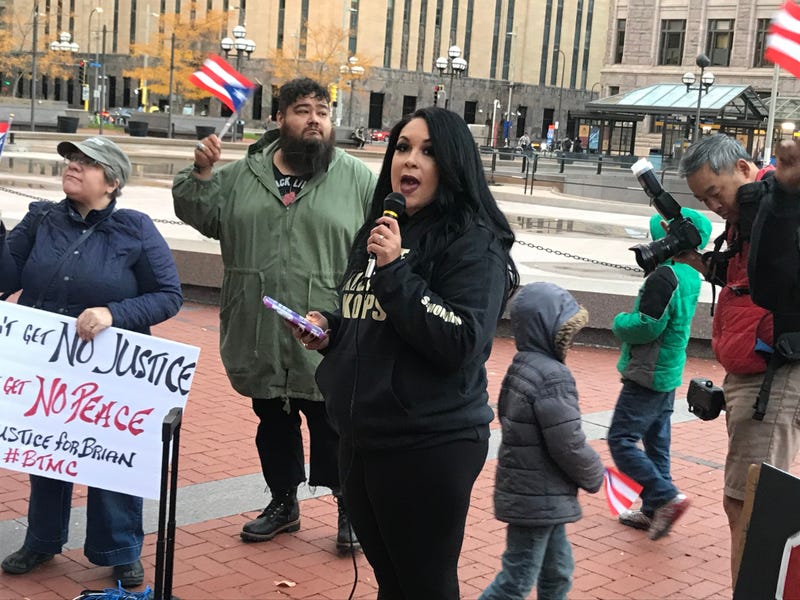 The Hennepin County Attorney's Office released a statement Monday afternoon in the shooting death of Brian Quinones-Rosario, who was shot during a traffic stop last September.

In a profanity-laced Facebook post, Quinones' wife Ashely called Freeman a coward, and that the police reports were contradictory.

A protest against Freeman's decision is Tuesday at 7:00 p.m on the 5100 block of Oliver Avenue South in Richfield.

Quinones-Rosario began live-streaming on Facebook while he was driving in the area of Normandale Frontage Road, near 77th street. Officials say that's when Edina Police Officer Nicholas Pedersen noticed him speeding and turning against a stoplight.  Officer Pedersen turned on his squad car camera and began following Quinones-Rosario, who was holding a cell phone up by his face.  He continued speeding and made a turn without signaling causing the officer to turn on his lights and siren, directing Quinones-Rosario to pull over.

The erratic driving continued, however, with the chase leading to the City of Richfield.  Officer Pedersen tried to bump Quinones-Rosario with his squad car, but couldn't get him to pull over.

Suddenly, Quinones-Rosario slammed on his brakes, and Officer Pedersen pulled in front of him, left his car and drew his gun.

A Richfield Police Officer, Dylan Schultz, also arrived on the scene and he described Quinones-Rosario with a knife outside his car walking towards Pedersen.

By then, other officers had arrived and they discharged a taser trying to subdue Quinones-Rosario.

Then, Quinones-Rosario turned, pointed his blade at Officer Schultz and ran at him, screaming “Kill me, kill me!”

Quinones-Rosario finally fell to the ground.  When medics arrived, he was pronounced dead on the sene.  Toxicology tests revealed Quinones was not under drug or alcohol influence during the incident.

After reviewing hours of footage from squad car cameras, County Attorney Mike Freeman said, “Under Minnesota law, it is clear that Officers Pedersen, Schultz, Stariha, Carroll, and Wenande’s use of deadly force was necessary, proportional, and objectively reasonable in the face of the apparent threat of death or great bodily harm, and no criminal charges are warranted."

Freeman also said, “First I want to acknowledge what a tragic event this was. My condolences go out to Mr. Quinones' friends and family," Freeman stated. "Our office received hours of video evidence from the Richfield and Edina police squad car cameras and from Mr. Quinones’ personal Facebook Live video. When Mr. Quinones left his car after leading police on a chase, he had a knife in his hand. Subsequently, he threatened several officers with the knife. Mr. Quinones refused police requests to stand down and refused to drop the knife."