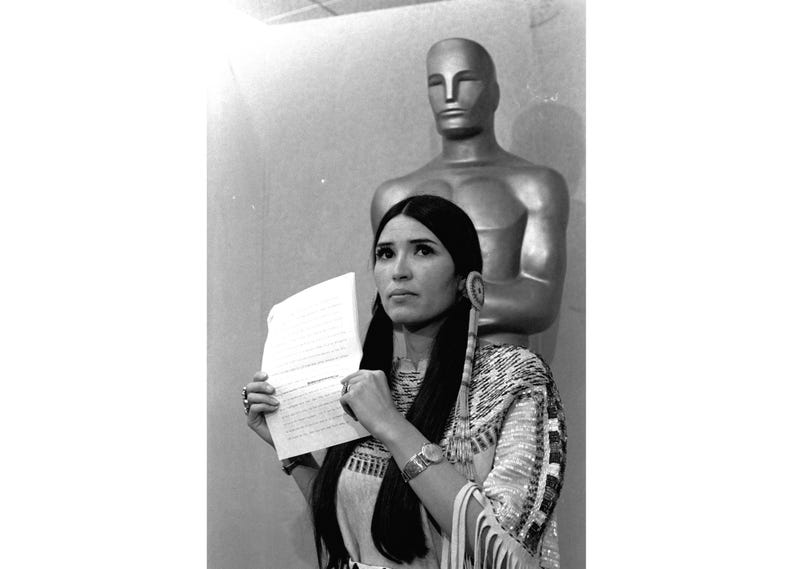 Sacheen Littlefeather, the actor and activist who declined Marlon Brando’s 1973 Academy Award for “The Godfather” on his behalf in an indelible protest of Hollywood's portrayal of Native Americans, has died. She was 75.

Littlefeather's niece, Calina Lawrence, confirmed that she died peacefully Sunday, surrounded by loved ones at her Marin County, California, home. The cause was breast cancer, the family said.

Littlefeather’s appearance at the 1973 Oscars would become one of the award show's most famous moments. Clad in buckskin dress and moccasins, Littlefeather took the stage when presenter Roger Moore read Brando's name as the winner for best actor.

Speaking to the audience, Littlefeather cited Native American stereotypes in film and the then-ongoing weekslong protest at Wounded Knee in South Dakota as the reason for Brando’s absence. She said Brando had written “a very long speech” but she was restricted by time to brief remarks. Producer Howard Koch had allegedly warned Littlefeather, then 26, that he would have her arrested if she spoke for more than a minute.

“I beg at this time that I have not intruded upon this evening and that we will in the future, our hearts and our understandings will meet with love and generosity,” Littlefeather said, becoming the first Native American woman to appear onstage at the Oscars.

Although brief, straightforward and courteous, Littlefeather’s appearance was contentious, receiving a mix of applause and boos from the audience. In the years after, Littlefeather endured considerable scorn and abuse for her speech, she said.

“I spoke from my heart,” she told The Associated Press days after the Oscars. “Those words were written in blood, perhaps my own blood. I felt about like Christ carrying the weight of the cross on his shoulders.”

Only recently did the Academy of Motion Pictures Arts and Sciences officially address the treatment Littlefeather received following her appearance. In August, the film academy apologized to Littlefeather. Two weeks ago, it held an evening of “conversation, healing and celebration” in her honor.

"The abuse you endured because of this statement was unwarranted and unjustified,” the academy's president, David Rubin, wrote in a letter to Littlefeather. “The emotional burden you have lived through and the cost to your own career in our industry are irreparable. For too long the courage you showed has been unacknowledged. For this, we offer both our deepest apologies and our sincere admiration.”

Littlefeather responded in a statement: "We Indians are very patient people — it’s only been 50 years!”

“We need to keep our sense of humor about this at all times,” she added. "It’s our method of survival.”

Littlefeather was born Marie Cruz on Nov. 14, 1946, in Salinas, California. Her father was from the White Mountain Apache and Yaqui tribes and her mother was white. Both were saddle makers. They separated when Littlefeather was four, after which she was raised largely by her grandparents. She took the name Sacheen Littlefeather after high school. Sacheen, she said, was what her father had called her; the surname came from a feather she often wore in her hair.

Littlefeather’s entry into acting corresponded with her activism. She was part of the Native American occupation of Alcatraz Island in 1969, she said, and began acting with San Francisco's American Conservatory Theater in the early '70s.

Littlefeather met Brando through her neighbor, “Godfather” director Francis Ford Coppola. She had known Brando for about a year before he called her the night before the 1973 ceremony, invited her to his house and asked her to attend in his place.

Political speeches at the Oscars were then still a rarity, and some in attendance saw the brief address as a break in decorum — and one that raised a subject not everyone was eager to consider.

“I don’t know if I should present this award on behalf of all the cowboys shot in all the John Ford Westerns over the years,” Clint Eastwood said later in the evening, while presenting the award for best picture. Presenting best actress, presenter Raquel Welch cracked: "I hope they haven’t got a cause.”

“I went up there thinking I could make a difference,” Littlefeather told People magazine in 1990. “I was very naive. I told people about oppression. They said, ‘You’re ruining our evening.’”

Littlefeather described the overwhelmingly white crowd as “a sea of Clorox.” She said some audience members did the so-called “tomahawk chop” and that Brando’s house was later shot at.

Over the years, Littlefeather added to the lore, describing John Wayne, who was in the theater wings as she spoke, as “ready to have me taken off stage.” In 2016, Littlefeather told The Los Angeles Times that Wayne “had to be restrained by six security guards." The film scholar Farran Smith Nehme has since researched the supposed incident and found no evidence it occurred.

But it was indisputable that Littlefeather’s life was altered by those 60 seconds. Following the Oscars, her credentials as an actor and activist — Littlefeather had posed in 1972 for Playboy, which she defended as proof that “red was beautiful” — were questioned in tabloid reports and elsewhere. Her opportunities as an actor dried up. Littlefeather said she was “red-listed” from the industry. She fell out of show business and, in the decades after, worked primarily as an activist for Native Americans.

At the academy event last month, Littlefeather, then in a wheelchair, said despite all the hardship she faced after the Oscars, she would do it all again.

“I was representing all Indigenous voices out there, because we had never been heard in that way before," Littlefeather said. "And if I had to pay the price of admission, then that was OK, because those doors had to be opened — like Yosemite Sam. Somebody had to do it.”