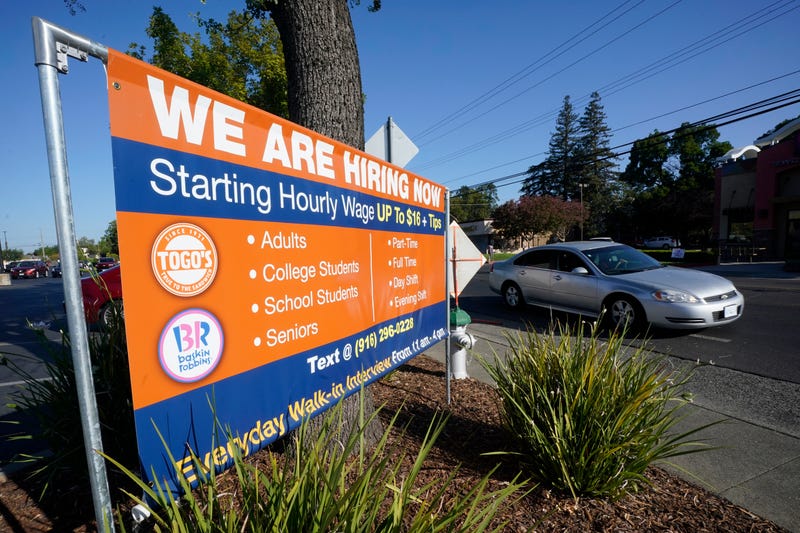 SACRAMENTO, Calif. (AP) — California's unemployment rate dipped a half-percentage point in December as the most populous state added 50,700 nonfarm jobs, accounting for more than a quarter of the nation’s 199,000 new jobs for the month, according to new data released Friday.

The state has now regained nearly 72% of the 2.7 million jobs it lost in the early months of the pandemic when Democratic Gov. Gavin Newsom imposed the nation’s first statewide stay-at-home order in the spring of 2020 to slow the spread of the coronavirus.

“In a tug-of-war between the positive economic momentum of the state’s economy and the headwind from COVID, California’s economy is making slow but steady progress forward,” said Sung Won Sohn, a finance and economics professor at Loyola Marymount University.

But he noted the full impact of the omicron wave had not been felt when the the mid-month jobless survey was conducted.

Among other impacts, that forced airlines to cancel holiday flights, businesses to keep employees working from home and schools to revert to online teaching. It also prompted more parents to remain home and added to what has become known as the “great resignation” phenomenon.

California's 6.5% jobless rate is down from 9.3% a year ago as the state added nearly a million jobs since December 2020, the state's Employment Development Department reported. The hiring boost last month still trails an average gain of 97,200 jobs in earlier months last year until a slowing in November and now December.

California also remained well above the national jobless rate of 3.9%.

The hard-hit leisure and hospitality sector led last month's increase by adding more than 15,000 jobs, with significant gains in food services and drinking places, the department said, despite pressures from the latest omicron wave.

Ten of California's 11 industry sectors gained jobs in December, and the professional and business services sector has now regained all the jobs it lost at the start of the pandemic.

A 6% increase in nonfarm jobs in 2021 represented the largest calendar-year increase for the state since 1990, the department said.

But a major issue still remains the "disappearing workforce in California,” said Michael Bernick, a former director of the Employment Development Department and a lawyer at the Duane Morris law firm.

The state remains nearly 920,000 workers below those employed in January 2020, just before the pandemic, he said.

New state-level job turnover data showed 1.1 million California job openings at the end of November, a number that has persisted since August even as employers scramble to find workers. Yet there were 415,000 voluntary resignations in November.

“Employers continue to report that even job seekers who respond to job openings fail to appear at interviews,” Bernick said.

Officials revised the state's November unemployment rate by 0.1 percentage points, to 7%, by adding 3,500 unemployed to its previous tally.

Colusa and Imperial counties recorded double-digit jobless rates last month, the worst in the state, while the wealthier San Francisco Bay Area counties of Marin, San Mateo and Santa Clara had the lowest rates, below 3%.

“As we go forward this year, we’ll continue taking action to get more folks back to work and support our businesses hit hardest by the pandemic,” Newsom said in a statement.