When former WCCO Program Director Jon Quick went scouting for new talent, it was time to hit the road, flip on the car radio and just listen.

In 1989, you couldn’t dial up an internet stream.  You didn’t have the RADIO.COM app.  You were at the mercy of how far, and how clearly, a radio signal travelled.

Quick was heading northwest, tuned in 790 KFGO Radio in Fargo, North Dakota.  And heard the voice of Dave Lee.  Quick decided Lee was a perfect fit at the Good Neighbor, and brought Lee to WCCO.

An era began on September 30th, 1989.  That era will come to a close April 30th, 2021 when Dave Lee hangs up his headphones and ends one of the most enduring and important institutions in Minnesota broadcasting.

If there was a Mount Rushmore for WCCO, it would be running out of room.  But Dave Lee belongs on it. 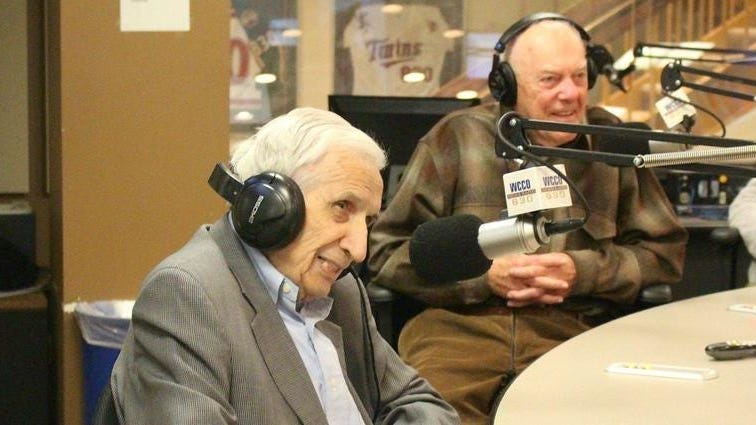 Sid Hartman, for over seven decades the voice of Minnesota sports, dead at 100

Dave Lee’s career has been a special one, but it’s the human behind the mic those of us who worked with Dave will remember. He is a remarkable person, he’s ‘Minnesota Nice’ to his core (even though he’s a North Dakotan), and there is nobody who could have carried on the Boone and Erickson tradition on WCCO better than Dave Lee.

Lee was born in Hatton, North Dakota, a small farming community near Grand Forks.  His broadcast career began in Fargo, where he was a 28-year-old program director and afternoon drive host at the KFGO.  That was where he came to the attention of Quick and WCCO.

He came to ‘CCO to work on the weekends, and as Quick has told us, to be “groomed” to take over for the stations starting to age morning show.  At that time the station was thinking about who might be next.  Certainly, after almost 40 years with WCCO, Boone and Erickson wouldn’t last forever.  Nothing does as we are seeing again today.

Soon Lee was sitting in when Charlie or Roger would go on vacation.  Slowly he became a crucial cog in the morning show, helping write some of Boone and Erickson’s famous bits which Lee would continue to do most famously with Minnesota Hospital live at the State Fair until COVID stopped that tradition in 2020.

First it was Charlie Boone who stepped aside in mornings, shifting to a Saturday morning show.  Dave and Roger then hosted the morning show together until Rog decided to hang it up in 1997.

From that moment until now, that show has been Dave Lee, an amazing 24-year run at the helm of one of WCCO’s most successful programs.  Dave brought trust, humor and amazing connections to WCCO listeners each and every morning.

He also was instrumental in bringing awareness and money to some of the station’s causes, along with some things that publically nobody knew about.  Dave embodied that Good Neighbor attitude in front of the microphone, and in his personal life.

Some years back, Lee recognized a need at the University of Minnesota Children’s hospital.  Dave started an awareness and fundraising program for the hospital as it transitioned to a new location.  The project has raised hundreds of thousands of dollars and opportunities for donors to adopt a room.  One of the rooms was named after Dave in his honor.

Dave and his wife Julie also started an on-going scholarship at the University of Minnesota Journalism School that has assisted students for more than ten years.

Dave’s fund-raising efforts for Bolder Options in Minneapolis, a program for youth mentoring, recently recognized him with the Alan and Diane page award.

Darrell Thompson, President of Bolder Options says, “The impact of Dave Lee on Bolder Options has been immense. Dave is an observant, thoughtful, and giving leader. He is never seeking credit for his good deeds. Today those gestures of kindness must be acknowledged. Not only is Dave an advocate for Bolder Options and the youth in our community, he has quietly raised hundreds of thousands of dollars for our community. The Legacy of Dave Lee's service to WCCO and our community will live on long after those beautiful pipes leave the airwaves.”

Other charities and non-profits Lee supports include The Leukemia and Lymphoma Society, Big Brothers/Big Sisters, and a Military Family Tribute which now has a permanent site on the grounds of the Minnesota State Capitol.

Some of the station’s biggest charitable causes were built around Dave Lee.  His “Gutter Bowl” bowling tournament and “Dave Lee’s Backyard Bash” lawn bowling event both raised many thousands of dollars and created endless awareness for multiple causes.

Dave’s career also has been rooted in sports since the beginning.  It is truly one of Dave’s first loves.

Dave continues to do the play-by-play of the television broadcasts of the Minnesota State High School Boys and Girls basketball tournaments, while being the radio voice of the University of St. Thomas football on WCCO.

For his efforts, Lee has been named as Minnesota’s Sportscaster of the year six times.  His television work has won three Emmys.

Dave Lee built an amazing career, and those that worked with Dave would all agree that their success was just as important to Dave as his own.  Maybe more.  From call screeners, to board operators, producers, news staff, management, promotions, sales, engineers, Dave was supportive of everyone.  Always available to help, always willing to share an idea, share a story, Dave was the ultimate teammate.

It also has to be said, there has never been a radio host that has done more for business clients than Dave Lee. His relationships with business leaders, endorsements, and credibility with listeners is unparalleled. It might be something that goes unseen by many listeners, but Dave Lee’s efforts on the sales floor are as crucial to the station’s success as anything including ratings and listenership. These are things in our business that must work hand-in-hand, something Dave Lee never forgot or took for granted.

Jeff Fetters, Chairman of Federated Insurance says, “Dave Lee is more than a good neighbor to Federated Insurance; he is one of the best neighbors one could ask for. He has been a tremendous spokesperson for us for decades through his professionalism, understanding our company and mission, and connecting us to WCCO’s listening audience. Dave is one of a kind and will sincerely be missed. He is a dear friend of mine and Federated Insurance and we all wish him the best in retirement.”

Dave has told the story this to many of us.  A former general manager at the station told Dave that when he started working on the morning show, the paychecks of everyone else at the station depended on his success.  He was now responsible to make sure the entire station was successful.  It was a lot of pressure to put on a young broadcaster, but it was also part of the foundation WCCO was built upon.  The morning show was THAT important.

He took that warning as motivation to do good.  And do good he did.  All these years later, all we can say to Dave is thank you.  We’ll have a chance to share some more stories and memories in the next couple of months before he signs off for good, but for now it’s thank you.

Dave has had the responsibility of picking up for legends he replaced. Now we have to replace the legend of Dave Lee which feels impossible as we today celebrate his years entertaining and informing us on WCCO.

Below is Dave's full announcement he was retiring along with a couple of other old friends wishing him well.