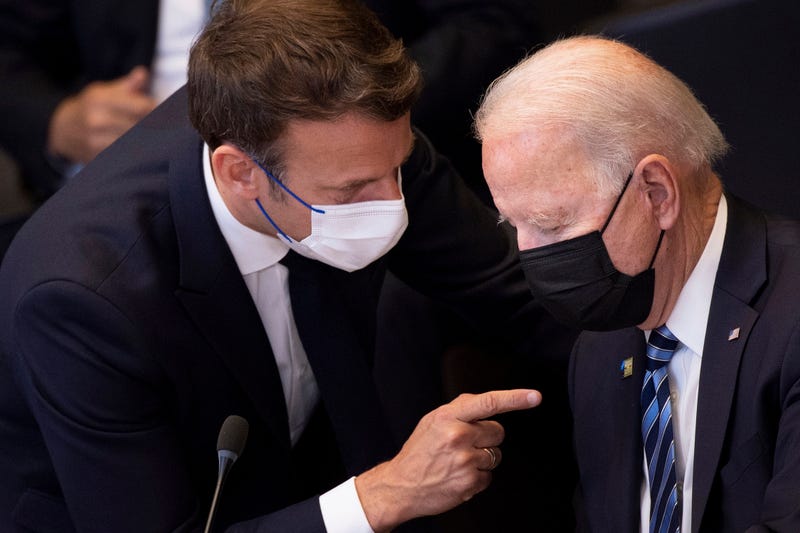 NEW YORK (AP) — This week’s phone call between President Joe Biden and French President Emmanuel Macron may have soothed some of France's incandescent rage over its exclusion from a new Indo-Pacific defense initiative and loss of a submarine deal worth billions, but the anger and resentment remain clear.

After meeting Thursday with Secretary of State Antony Blinken on the sidelines of the U.N. General Assembly, French Foreign Minister Jean-Yves Le Drian pointedly referred to the situation as a “crisis” that will take time and U.S. action to overcome.

As part of the defense pact, Australia will cancel a multibillion-dollar contract to buy diesel-electric French submarines and acquire U.S. nuclear-powered vessels instead.

According to Le Drian, he and Blinken discussed the “terms and topics to be dealt with in an in-depth consultation process between the two countries aimed at restoring trust.”

Le Drian "affirmed that a first step had been taken with the call between the two presidents but noted that it would take time to end the crisis between our two countries and would require actions,” according to a statement from the French foreign ministry.

That’s even after Macron told Biden he had decided to send his country’s ambassador — recalled to Paris in an unprecedented move at the height of the spat — back to Washington.

Seeking rapprochement with America’s oldest ally appears not to come easily to the Biden administration, which has stopped short of apologizing for excluding France from its Indo-Pacific arrangement with Britain and Australia and seems intent on powering through the trouble.

While Le Drian lingered on the hurt and damage done to the relationship, neither Blinken nor the State Department's account of the meeting gave it nary a mention. Nor did they mention "trust."

Speaking to reporters at a news conference, Blinken said he would work closely with Le Drian on “the process of in-depth consultations going forward,” but he ignored a question about whether the U.S. regards the situation as a “crisis” and whether he apologized to the minister.

“We recognize this will take time and hard work and will be demonstrated not only in words but in deeds, and I committed to working closely with Mr. Le Drian on this crucial effort,” Blinken said. “On a personal note, I would just add that he and I have been friends for a long time, he is someone I hold in great esteem.”

Blinken's comments, though, appeared to suggest that both sides needed to work hard for the in-depth consultations to succeed.

State Department spokesman Ned Price had said earlier that the two men "discussed the EU Strategy for Cooperation in the Indo-Pacific, which the United States welcomes, and the need for close cooperation with France and other European allies and partners active in the region.”