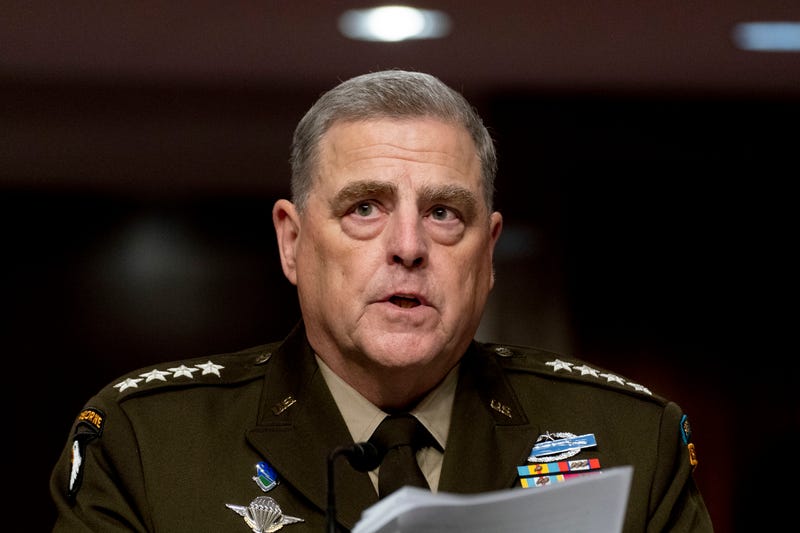 ABOARD A U.S. MILITARY AIRCRAFT (AP) — The U.S. should explore ways to expand its military contacts with the Russians, potentially to include allowing observers from each country to watch the other's combat exercises, in a broad effort to increase transparency and reduce the risk of conflict, the top U.S. military officer said Thursday.

Army Gen. Mark Milley, chairman of the Joint Chiefs of Staff, met in Finland for six hours Wednesday with his Russian counterpart, Gen. Valery Gerasimov, chief of the Russian General Staff. Speaking to two reporters traveling with him back to the U.S., Milley said that military contacts between the two great powers are currently largely limited to senior leaders such as the defense secretary, the chairman and the supreme allied commander for Europe.

But he said the U.S. might look into allowing the military service chiefs to form stronger relationships with their Russian counterparts — which is currently not allowed. That way, for example, naval leaders could reach out to avoid conflict when there are tensions at sea.

“We need to put in place policies and procedures to make sure that we increase certainty, to reduce uncertainty, increase trust to reduce distrust, increase stability to reduce instability in order to avoid miscalculation and reduce the possibility of great power war,” Milley said. “That’s a fundamental thing that we should try to do, and I am going to try to do it.”

Allowing observers at exercises and other changes, he said, are worth exploring. "We might not do it, but we should at least take a look at it,” Milley said.

Milley declined to detail the contents of his talks with Gerasimov, but a Joint Staff statement appeared to suggest that transparency was discussed. The statement said the meeting was focused on the military and that “both sides seek increased transparency to reduce misunderstanding and increase stability.”

Milley's comments Thursday come in the midst of a furor over calls he made during the final turbulent months of Donald Trump's presidency to assure his Chinese counterpart that the United States was stable and wasn’t going to suddenly go to war with or attack China.

Milley has argued that the calls were routine and “perfectly within the duties and responsibilities” of his job to reassure an adversary and ensure strategic stability.

Trump, however, has labeled his calls to the Chinese as treasonous, and some Congress members have called for him to step down. As the debate roiled in D.C., however, Milley was thousands of miles away doing much of the same thing: speaking to his military counterparts — both allies and adversaries — in a series of meetings in Europe.

America's relationship with Russia has been precarious.

After a period of post-Cold War cooperation on nuclear security and other defense issues, the relationship between Washington and Moscow took a nosedive, particularly after Russian forces entered the former Soviet republic of Georgia in 2008. Tensions spiked with Russia’s annexation of Crimea in 2014 and its military intervention in eastern Ukraine.