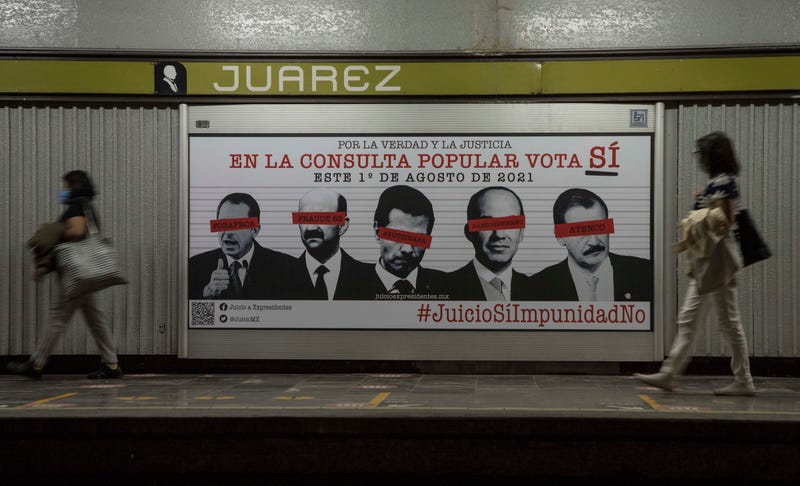 MEXICO CITY (AP) — A referendum in Mexico on Sunday is going to cost Mexico about $25 million, few like the poorly written, yes-or-no question on the ballot, and the vote is being held in the middle of a third wave of the coronavirus pandemic.

To top it off, critics say the referendum question is so obvious that it’s offensive to submit it to a vote.

So why is Mexico holding a nationwide referendum on whether ex-presidents should be tried for any illegal acts they may have committed? Mexico has no formal amnesty for former leaders, and there is nothing in current law saying they can’t be brought to justice if there is evidence they have committed a crime.

As opponents say in a slogan, “The law must be applied, not put up for a vote.”

To comprehend the exercise, one has to understand President Andrés Manuel López Obrador, who pushed for the referendum. A populist, he likes large crowds, and the pandemic has prevented him from holding the kind of mass rallies of hundreds of thousands of people he used to have regularly in Mexico City’s main plaza when he was a candidate.

He needs 40% of registered voters to participate — about 37 million people — to participate Sunday or the referendum won’t be binding. While the president is unlikely to get that many out to vote, he has to draw at least several million, and he has pulled out the stops to mobilize voters.

José Antonio Crespo, a political analyst at Mexico’s Center for Economic Research and Training, called the referendum “strictly an exercise in politics and media exposure,” noting the outcome of the ballot question isn’t in doubt.

“The question isn’t whether the “yes” option will win, we know that 90% or more will vote yes,” said Crespo. “The question is, how many people will go out to vote? A lot of us don’t want to be used in a manipulation. It will be an indicator of how many people still support López Obrador, of how much capacity he has to mobilize people.”

After two unsuccessful runs for the presidency — which he says he was cheated out of — López Obrador won on the third try in 2018, promising “revenge is not my strong suit” and forging a cordial transition with former president Enrique Peña Nieto.

Crespo, like many Mexicans, believes López Obrador struck a non-aggression pact with Peña Nieto, agreeing not to go after him in return for promises of a clean presidential race in 2018.

But the whole thing, while perhaps necessary, left López Obrador short on his main promise, to eradicate corruption; three years into his term he has few high-profile convictions to show for it. The corruption allegations made by the former head of the country’s state-owned oil company against Peña Nieto and top officials of the previous administration ha