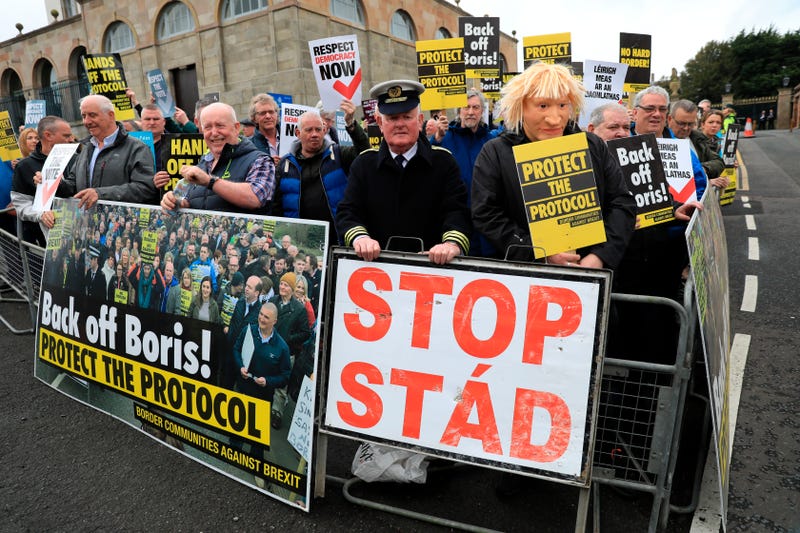 LONDON (AP) — British Prime Minister Boris Johnson signalled Monday that a plan to rip up parts of the post-Brexit trade deal he signed with the European Union could become law by the end of the year.

Lawmakers began debating legislation that rewrites trade rules for Northern Ireland on Monday, the first step on what could be a rocky journey through Parliament.

If approved by lawmakers, the legislation would remove checks on goods entering Northern Ireland from the rest of the U.K., thereby scrapping parts of a trade treaty that Johnson signed before Britain left the EU in 2020.

Johnson said he thought the plan could be approved “fairly rapidly” if Parliament cooperates. Asked if the measures could be in place this year, he said: “Yes, I think we could do it very fast, Parliament willing.”

The British government says the rules, known as the Northern Ireland Protocol, are burdening businesses and undermining peace in Northern Ireland. It argues the unilateral move is justified under international law because of the “genuinely exceptional situation.”

Johnson’s opponents, however, say the move is illegal.

“Many of us are extremely concerned that the bill brazenly breaks a solemn international treaty, it trashes our international reputation, it threatens a trade war at a time when our economy is flat and it puts us at odds with our most important ally,” Conservative Andrew Mitchell said in Parliament Monday.

Foreign Secretary Liz Truss replied that the government's plans are the only solution to resolve trade problems in Northern Ireland because the EU has been unwilling to reopen negotiations.

The plans have caused concern among some of Johnson's fellow Conservatives, already worried about his judgment — and popularity — following a series of ethics scandals and two special election defeats.

But Johnson said Monday that questions about his leadership were no longer relevant.

“We settled that a couple of weeks ago,” he told reporters in Germany, referring to his survival in a no-confidence vote three weeks ago.

The EU has threatened to retaliate against the U.K. if it goes ahead with its plan to rewrite the rules of the post-Brexit deal, raising the specter of a trade war between the two major economic partners.

Irish foreign affairs minister Simon Coveney said he was “hugely disappointed” that the U.K. government is still pursuing its “unlawful” approach to the Northern Ireland Protocol.

“This is not the way to find sustainable solutions to the genuine concerns of people and business in Northern Ireland and only adds to uncertainty," he said.

“It is a treaty that we signed, ratified and even went through a general election in this country,” he told Times Radio.

Northern Ireland is the only part of the U.K. that shares a border with an EU country, Ireland. When Britain left the European Union and its borderless free-trade zone, the two sides agreed to keep the Irish land border free of customs posts and other checks because an open border is a key pillar of the peace process that ended decades of violence in Northern Ireland.

Instead, to protect the EU’s single market, there are checks on some goods, such as meat and eggs, entering Northern Ireland from the rest of the U.K.

Johnson’s Conservative government claims overzealous EU implementation means the rules are not working as expected and are causing a political crisis in Northern Ireland.

“You have got one tradition, one community, that feels that things really aren’t working in a way that they like or understand — you’ve got unnecessary barriers to trade between Great Britain and Northern Ireland," Johnson said.

“All we are saying is you can get rid of those whilst not in any way endangering the EU single market,” he said.

British unionists there say the checks are fraying the bonds between Northern Ireland and the rest of the U.K., seen by some unionists as a threat to their British identity. Northern Ireland’s main unionist party is blocking the formation of a new power-sharing government in Belfast, saying it won’t take part until the Brexit trade rules are scrapped.

“I want to see the reestablishment of the Northern Ireland Assembly and the Executive, and the protocol is getting in the way of that,” Lewis told Sky News. “We have got to resolve that. That’s what this legislation will do.

“Ultimately, we want to do this by agreement with the EU,” he added. “But to do that, they need to show some flexibility and actually come and negotiate in a flexible way.”

Frank Griffiths contributed to this report.