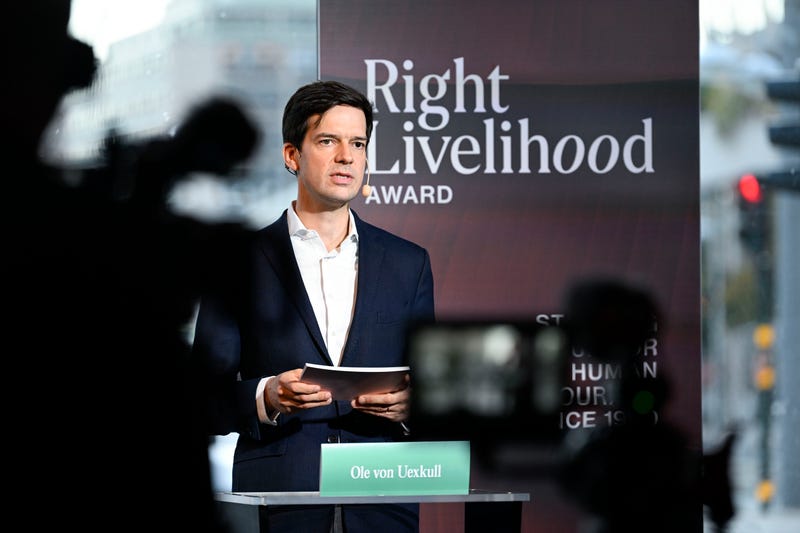 STOCKHOLM (AP) — The Right Livelihood Award — known as the “Alternative Nobel” — was awarded Thursday to community activists and organizations working on three continents, including a Ukrainian civil rights activist.

Oleksandra Matviichuk and the Center for Civil Liberties that she heads were honored “for building sustainable democratic institutions in Ukraine and modeling a path to international accountability for war crimes.”

In a statement released by the award committee, Matviichuk said that “now we are going through a very dramatic time of Ukrainian history ... this award is a gesture of support for our struggle in general, and for my work, in particular.”

Somalia human rights activists Fartuun Adan and Ilwad Elman, who lead community-based peacebuilding initiatives and provide support to marginalized groups, were cited “for promoting peace, demilitarization and human rights in Somalia in the face of terrorism and gender-based violence.”

Cecosesola, a Venezuelan association of cooperatives, was cited “for establishing an equitable and cooperative economic model as a robust alternative to profit-driven economies.”

The Africa Institute for Energy Governance (AFIEGO) won “for their courageous work for climate justice and community rights violated by extractivist energy projects in Uganda.”

Dickens Kamugisha, the CEO of AFIEGO, said it was not only the cash prize that made the award valuable to the organization. "When the government knows that there are people around the world who appreciate our work, they think twice about attacking us or our communities.”

Created in 1980, the annual Right Livelihood Award honors efforts that the prize founder, Swedish-German philanthropist Jakob von Uexkull, felt were being ignored by the Nobel Prizes.

Each winner will get 1 million kronor ($88,300) cash. The laureates will receive the awards during a ceremony on Nov. 30 in Stockholm.

In 2022, 175 nominees from 77 countries were considered, the Right Livelihood said.