Buffalo, N.Y. (WGR 550) - It was certainly a disappointing ending to the 2022 season for the Buffalo Bills after a loss in the AFC Divisional Round to the Cincinnati Bengals.

With the Bills playing in front of the home crowd at Highmark Stadium, and even winning the coin toss in snowy conditions that should be customary for winter in Western New York, the team flatlined at the worst possible moment of the season, getting run out of its own building with their tails between their legs.

One can understand the frustrations fans in Buffalo may be feeling with the football team. The Bills were, arguably, sporting one of the better rosters in the NFL heading into the 2022 season with expectations running extremely high across the league. However, the team ended up falling short, once again, in the Divisional Round.

Now the Bills are set to being another offseason in Orchard Park, but this time with seemingly more questions than answers across the board. Questions that could certainly drive any Bills fan up a wall with weeks still remaining before the new league year starts in mid-March.

In the meantime, however, fans can maybe find a way to get their minds off of football by taking some solace in the recent success of the Buffalo Sabres.

Yes, it has been 11 seasons since the Sabres have last made the Stanley Cup Playoffs - a new NHL record established last season - but this young group of players in Buffalo are starting to click at the right moment just past the halfway point of the 2022-23 campaign.

Through 47 games this season, the Sabres currently sit with a 25-19-3 record and 53 points in the Eastern Conference standings. While Buffalo may sit eight points back of a playoff spot in the Atlantic Division, the team only remains three points back of the final Wild Card spot in the conference shared by the Pittsburgh Penguins and Washington Capitals.

It has been several years since the last time the Sabres were in playoff contention just past the halfway point of a season. The previous best record the Sabres had through 47 games in a season was back during the 2018-19 season, where Buffalo was 24-17-6 under the tutelage of head coach Phil Housley.

If you remember that season, the Sabres opened the year with a 10-game winning streak in November that had Buffalo at a 17-6-2 mark through 25 games. However, that 10-game winning streak appeared to be more of a fluke than any indication of sustainable long-term success for the remainder of the season, as Buffalo went on to finish the year with a 33-39-10 record, eventually resulting in the firing of Housley.

Other than that, the best finish the Sabres have had following a strong start to the season through 47 games came at the start of the playoff drought in the 2011-12 season. That year saw a Buffalo team, led by head coach Lindy Ruff still, go 19-23-5 to start the year and finish the season with a 39-32-11 record. Despite the strong finish, the Sabres just missed out on the postseason by three points.

This current iteration of the Sabres appears to be trending in a positive direction, not only this season in Buffalo but beyond.

While the Sabres may not exhibit the prettiest of play on the ice, they certainly know how to score goals and exhilarate fans in Buffalo.

At this point of the year, the Sabres are tied atop the NHL in scoring with 3.81 goals per-game. The team they happen to be tied with is their Atlantic Division rival Boston Bruins.

In addition, Buffalo is sixth in the NHL with the man advantage, converting on 25.8% of their chances on the power play. The Sabres are also 12th in the league in shots on goal, averaging 32.5 per-game. Plus, Buffalo's plus-20 goal differential ranks among the best in the NHL for teams currently on the outside looking in on the playoff picture.

As previously mentioned, Sabres do not play a perfect game overall, as the team does boast some of the worst defensive stats in the entire league. Through 47 games, Buffalo averages 3.40 goals-against per-game (10th worst) and 32.8 shots-against per-game (8th-worst). To add to that, the Sabres are the fifth-worst penalty killing unit in the league (73.8%), while also being the worst faceoff team in the NHL at 45%.

However, since snapping an eight-game losing streak back on Nov. 22, the Sabres continue to play as one of the better teams in the entire NHL with a 18-8-3 record in 29 games. Their .672 win percentage currently ranks the Sabres fifth in the NHL during that span.

Not to mention, the Sabres have been extremely impressive away from KeyBank Center this season, sporting a 14-7-1 record. The numbers on home ice could be much better, as the team is only 11-12-2 in front of the home crowd.

However, the team has shown incredible signs of life on home ice with a full house in attendance. What better example of this came just last Thursday for "Ryan Miller Night" when 19,070 fans at KeyBank Center brought the energy and helped lift Buffalo to a 3-2 overtime win over the New York Islanders. 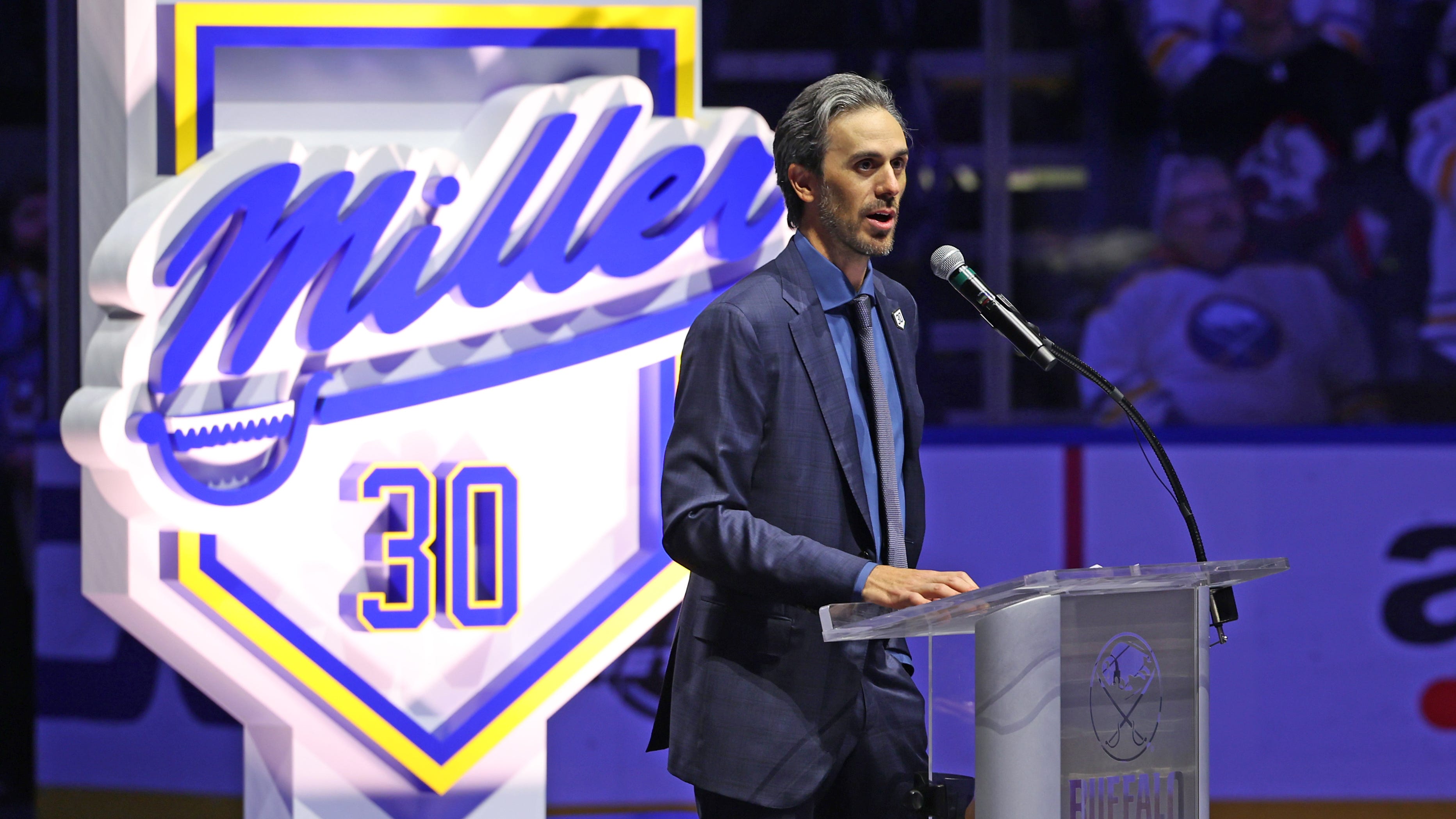 With three games remaining before the NHL All-Star break, the Sabres could realistically find themselves right in the thick of the playoff race in the Eastern Conference. The team is currently riding a three-game winning streak, and sporting some of the better young talent on the roster this season across the league.

The young talent has to start with the play of center Tage Thompson, who has taken the league by storm with his outburst of production.

Through 47 games this season, the 25-year-old has scored 33 goals and added 33 assists for 66 points. Thompson is currently tied for third in the NHL in goals with Jason Robertson (Dallas Stars), while sitting tied for fifth place in overall scoring, also with Robinson. His 192 shots on goal also ranks Thompson within the top-10 of the league.

If Thompson is able to finish out the season playing in all 82 games, he is projected to finish with an astonishing 58 goals and 58 assists for 116 points. That would put Thompson in the franchise history books as the third-best season in team history, sitting only behind Alexander Mogilny (127 points) and Pat LaFontaine (148 points) during their historic 1992-93 season in Buffalo.

Meanwhile, the Sabres currently have three other forwards that are projected to finish the 2022-23 season with 30 or more goals, and another that could eclipse the 30-goal rate. Both Alex Tuch and Victor Olofsson have established new career-high totals, with Tuch netting 23 goals and Olofsson scoring 22 goals. Meanwhile Jeff Skinner has reached the 20-goal mark once again, and Dylan Cozens so far has 17 goals.

On the blue line, the Sabres are led by fifth-year defenseman Rasmus Dahlin, who has firmly supplanted himself in the conversation as one of the best in his position in the NHL.

Despite missing one game earlier this season due to a minor ailment, the 22-year-old has scored 14 goals and registered 53 points in 46 games. At the rate he's been scoring, Dahlin is projected to reach the 25-goal mark, while accounting for 69 assists for 94 points.

As it stands right now, Dahlin ranks second in the NHL among defensemen in both goals and points, only trailing San Jose Sharks blue liner Erik Karlsson. The veteran defenseman in San Jose is having himself a revival season with 15 goals and 49 assists for 64 points in 49 games on a pretty abysmal Sharks team.

While Dahlin has struggled, at times, defending his own end in past years, the young Swedish-born blue liner has really blossomed into a threat at both ends of the ice, as he rounds his game out at the top level of hockey. Not only is Dahlin a plus-18 this season from the blue line, his possession numbers show his team is more so on the offensive end of things whenever he takes to the ice, while his defensive numbers remain very respectable.

There is certainly an argument that could be made for Dahlin to be a finalist for the Norris Trophy, at this point of the season, as the top defenseman in the NHL this year. Not only is Dahlin producing career numbers with the Sabres in his fifth season with the team, but he's also doing so on a team vying for a playoff spot. While it may be too early to determine whether or not Dahlin can be considered a favorite for the Norris, others that will be in contention includes Adam Fox (New York Rangers), Cale Makar (Colorado Avalanche) and Josh Morrissey (Winnipeg Jets). 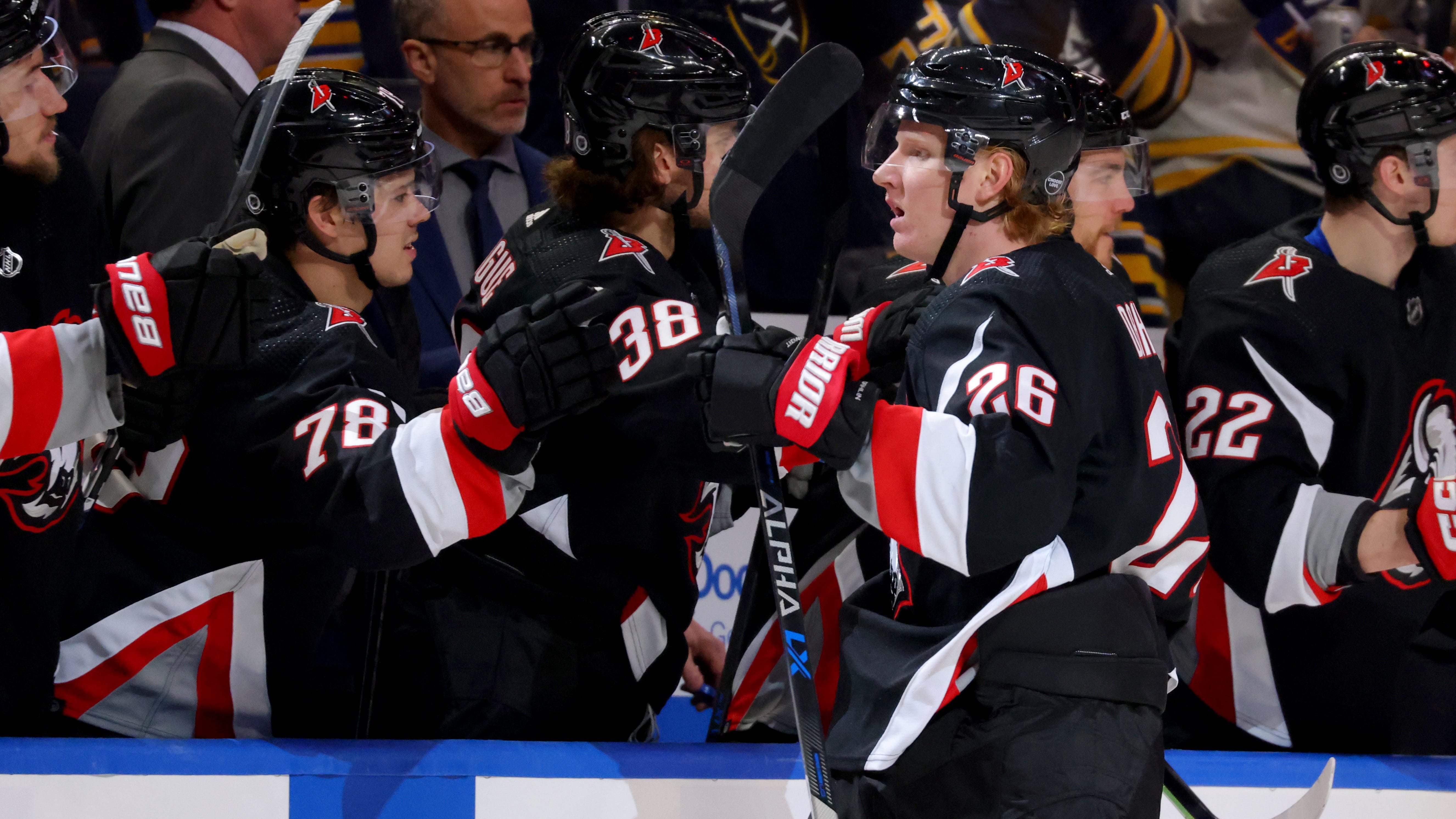 Meanwhile, the Sabres have another blossoming defender with the presence of 20-year-old Owen Power.

The Canadian-born defenseman has slowly, but surely developed into a solid two-way presence on the Buffalo blue line. While he doesn't necessarily navigate the ice as graceful as Dahlin, he is incredibly smooth on his feet and a calming presence from the back end.

It took Power 43 games to score his first goal of the 2022-23 season, but it came in a huge situation on Monday night in overtime to give the Sabres a 3-2 win over the Stars.

So far this season in 44 games, Power has two goals and added 16 assists for 18 points. The rookie blue liner is on pace to finish the year with an impressive 33 points in 79 games, which would currently be good for second among first-year defensemen, behind only Calen Addison (Minnesota Wild).

Although Power's 18 points is not going to get him rave reviews with consideration for the Calder Trophy, he should certainly be looked at as a candidate right now for the role he plays on the Sabres blue line. As a rookie, he leads all skaters in average time on-ice by a mile (23:36), leads the league among rookies with a plus-12 rating, and his 72 shots on goal ranks him seventh.

What may eventually put Power in consideration above some other rookies this season for the Calder is his possession numbers compared to the rest of the group. His numbers, matched with his ice-time and the role he plays already as a top-four defenseman in Buffalo, it'll be hard to overlook Power as, at the very least, a finalist.

Other players to consider for the Calder Trophy to this point of the season includes Matty Beniers (Seattle Kraken), Cole Perfetti (Jets), and Addison. Sabres 'Power' their way past Stars in overtime

Where the concern with this Sabres team lies at the moment is with the goaltending. At the time being, Ukko-Pekka Luukkonen has been named the No. 1 goalie in Buffalo, with veteran Craig Anderson and newcomer Eric Comrie splitting time as the backup.

If he can continue to do enough to keep the Sabres in games time-and-time again, Luukkonen will continue to get time in net and be looked upon very fondly going forward.

Here's to hoping the good times continue to role with 35 games remaining in the schedule. If you haven't latched on to this Sabres team yet, now is certainly the time.