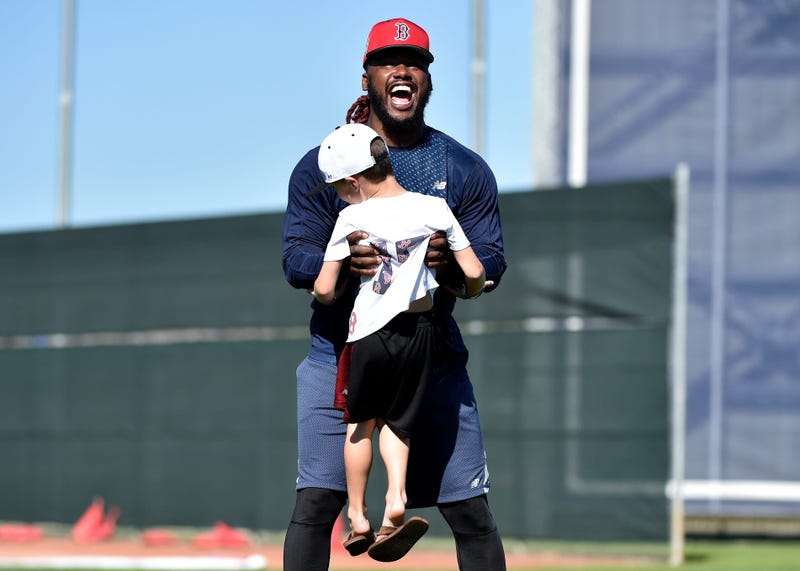 FORT MYERS, Fla. -- Everyone knew this day was probably coming. J.D. Martinez's presence on the Red Sox is about to make things just a bit more complicated, which was why early Tuesday afternoon media members immediately went to the lockers of Mitch Moreland and Hanley Ramirez.

"He's a force, obviously," Moreland said when asked about the acquisition of Martinez. "To have him kind of anchored in the middle of our lineup is only going to help us."

They said all the right things and certainly couldn't have been blindsided by the move. But, still, there is an understanding that some pecking order needs to be established with Martinez clearly ready to get the majority of the at-bats at designated hitter.

Alex Cora would seem to be not waiting around.

The discovery of Cora's initial plan was somewhat accidental. It came as a product of a question regarding who might be the Red Sox' No. 3 hitter. We knew the leadoff guy (Mookie Betts), and Andrew Benintendi was being slotted in second. But in the three-spot? That was answered just after noon on Tuesday.

"As of now? Hanley Ramirez," the Red Sox manager said.

To be clear, this is not Northeastern-level lineup stuff. This is who would get the nod right now against Tampa Bay righty Chris Archer come Opening Day. And what that means is that Cora is viewing Ramirez as Plan A when it comes to divvying up playing time at first base.

"Thank you for letting me know. I didn't know that," said Ramirez of Cora's lineup proclamation. "That's good when a manager put that's confidence in you. It makes you work harder and get better at the plate. That's where I want to be. I want to contribute as much as I can all year long and make it easy for the guys hitting behind me. It puts me in a good spot. Honestly, it's an honor."

So, why would Cora choose this course even before the start of the Grapefruit League season? It's all about upside and attitude.

This is a guy who might have felt like a middle-of-the-order guy for a chunk of last season (hitting cleanup 71 times), but the dip down into fifth (36 starts), sixth (12) and seventh (6) spots changed the narrative by the time the postseason rolled around.

This time? The manager knows the ceiling of Ramirez is a gold mine.

Give him confidence. Make him feel like the player he left behind in 2016. Then you might have something that actually resembles a legitimate middle of the order hitter and what was presented a year ago. For Cora and the Red Sox, the most value comes from seeing if Ramirez might evolve into a $22 million player, and not just default to worrying about him getting those 497 plate appearances and that guaranteed year in 2019.

"Looks like you guys are more worried about my at-bats than winning a championship. I don’t know why," Ramirez said. "Me and J.D. trained together in Florida. We have a good relationship. We just want to win. That’s good. It’s not about me. It’s not about the at-bats. That is not on my mind, about the at-bats. You know what’s on my mind? Winning. That’s it. Common sense. Nothing else matters."

To be clear, this isn't a playing time death sentence for Moreland​. Cora has made a point of emphasis regarding giving guys plenty of rest, which would obviously pave the way for at-bats for both the first baseman and Eduardo Nunez. And, let's be honest: It's still February.

"Like you've heard a lot in this camp, everyone has one goal. That's what we're doing. That's what we're trying to get to. How we get there it doesn't matter, as long as we get there and make that goal happen," Moreland said. "My whole career has always been situations like this. But winning teams are going to have a lot of good players and everybody is going to contribute."

For now, the priority is to get Ramirez to contribute more than most. This was Step 1.