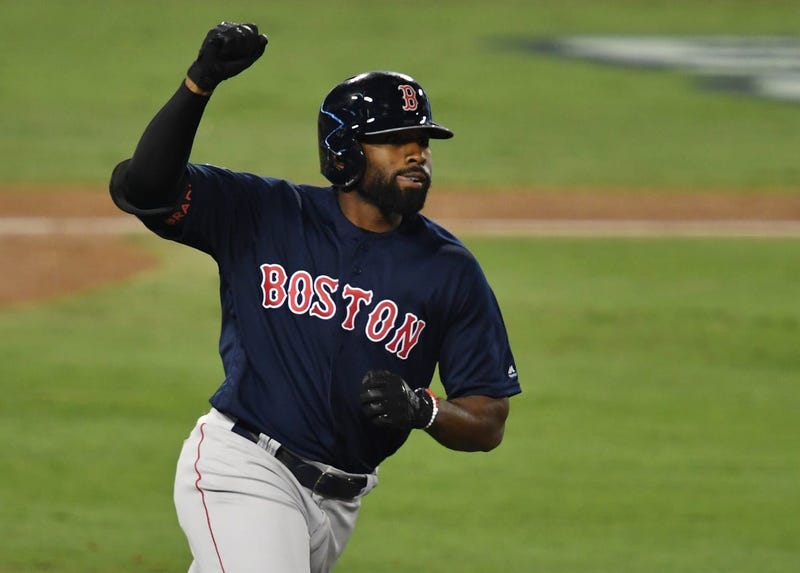 LAS VEGAS -- The question was posed to Alex Cora Tuesday at the MLB winter meetings: Which player are you looking forward to watching take the next step?

"Looking forward to Jackie the whole season," said the Red Sox manager. "That's going to be cool. We had a conversation at Christian (Vazquez's) wedding, and that's when he said he's going to go to LA. I told (Cora's girlfriend) Angelica, this is going to be good. He felt it and he understands who he is now and I don't think the whole -- like the roller coaster Jackie Bradley will happen again. He understands who he is. And with that offensive approach over 162 games, we'll see what happens."

It sounds good. But a lot of things sound good this time of year.

But then you listen to the player Cora was raving about -- Jackie Bradley Jr. -- and it's easy to understand the excitement.

The story of why Bradley Jr. has been put in Cora's crosshairs is due in part to a second half that included a .827 OPS. And those three clutch postseason homers, along with a .835 OPS in the playoffs didn't hurt, either. That, however, really is just the bumper sticker version of how this optimism was surfaced.

For the real root of why the outfielder is being viewed and is viewing himself differently, his trip to Los Angeles two weeks ago has to be factored in.

"This is the first time I heard any of this stuff," said Bradley Jr. by phone Tuesday night. "What I’ve been taught my whole life is completely wrong. It’s scary to say that, but it’s wrong. I feel fortunate enough to make it this far doing it wrong."

The story starts just before the All-Star break when Bradley Jr. started picking the brain of J.D. Martinez. It wasn't as if the two hadn't talked hitting before, but it was time for the center fielder to explore the next level. The one that involved Martinez's personal hitting coach Craig Wallenbrock.

"He threw it out there," said Bradley Jr. regarding Martinez's mention of Wallenbrock. "He said, ‘This guy really knows what he’s talking about.’ He’s basically helped me transform from the player that I was to helping me become the player that I am today. J.D. had said how much he helped him and how knowledgeable about the game and knows what it takes to be a pretty good hitter.

The outfielder continued, "I was introduced to him right before the All-Star break. I didn’t know exactly who (Martinez) worked with but it was to the point where J.D. was telling me and showing me all the things that it takes to do it. But in another sense, I’m not trying to bog J.D. down because he also has a job to do, too. I wanted the knowledge for myself as well, but I didn’t want to put any extra burden on anyone else. So I wanted to go straight to the source.

"It was definitely starting to work. Things were starting to fall into place. But then also there were times I might have had a good game but I knew I wasn’t doing it fully correctly and consistently. It was just that motivation to finally get it right and see what happens when I’m able to consistently do it on a day in, day out basis. As you can see Markus (Betts) and J.D. are perfect examples. Markus was making adjustments in spring training and everybody was talking about how slow he was starting in spring training. But he was still trying to buy into the whole concept of J.D. and Craig and a lot of hitters do. Once he was able to finally buy in, he stuck with it. I’m not saying he wouldn’t have won the MVP regardless, but I would definitely like to say it was a contributing factor."

The conversations between Bradley Jr. and Wallenbrock were always via some sort of electronic device, never in person. Still, it was clear there was a connection.

On July 1 the lefty hitter found himself carrying a .198, riding the latest downturn in what had always been a roller-coaster experience in the batter's box. Thanks in part to his immersion into the world of Martinez and Wallenbrock Bradley Jr. started fixing things, as was evident by a batting average that had been raised 36 points by the end of the regular season.

"There is no doubt in my mind about it," said Bradley Jr. when asked if the instruction marked a turning point in his career. "A lot of people like to talk about since the All-Star break. Since that time I had been working with J.D. and talking to Craig over the phone, but there is just so much you can do when you’re trying to explain things over the phone and show things from a distance. You’re trying to process all of that but also not forgetting to compete. These at-bats matter. You can’t just be thinking about what you’re trying to work on. You have to be able to make adjustments on the fly and produce right away with it, too.

"I can only do so much, but to go out there and do it, I can do the drills, sit down, look at the video right away, get that feeling and I can make adjustments immediately. Not only am I not competing but I can see it physically on the screen instead of talking over the phone."

For just shy of a week Bradley Jr. dug into his new way of doing things with the hitting coach at his facility in the Los Angeles area.

"I wanted to get a good foundation so I worked for three or four days," he said. "That’s the good thing about the offseason, being able to make adjustments and get everything locked in and that can be your main focus because you don’t have to compete. During the season there are other things you’re thinking about, but you still have to go out and compete. The guy is still trying to get you out. I think forming good habits start now.

"It’s night and day. It’s something where you do it sometimes but to consistently do it, that’s the difference. All the great players in the game do certain things pretty consistently and that’s what makes them great. I feel like he’s helped me go in the right direction."

In a nutshell, Bradley Jr.'s mission is to get the ball in the air more.

He saw some progress in 2018, watching his ground ball percentage drop by five percent. According to BaseballSavant.org, he hit the ball hard more than 50 percent of the time, which put himself in the top four percent of major league hitters. His average of 91.9 mph exit velocity was in the MLB's top six percent.

And, as far as Bradley Jr. is concerned, this is just the beginning.

"We all have the talent," he said. "That’s the thing. I think once you find a way to maximize the talent, that’s what makes players great. Knowing I can hit the ball just as hard as them physically, it all comes down to the way I impact the baseball. Well, I hit too many ground balls so let’s solve that problem. Let’s get the ball off the ground, get it more in the air, on a line and that way the shifts will be beaten.

"Actually seeing it person and looking at videos of great hitters who already do it. They all pretty much do it. That’s what makes them great. Some might not even know they do it. It’s just the natural ability to do it. Other guys do know they are doing it and continuously work on it. I think one of the most difficult things for me is knowing my dominant hand is on the bottom instead of the top. So getting that motion I want down is going to take a little bit more work. But I took to it really quick and I’m happy with the direction I’m going, for sure."

Bradley Jr. will go back out to see Wallenbrock one more time before spring training and then comes the real test, living up to these new expectations.

"Swinging down" may not mean what you think it means. Get on plane! pic.twitter.com/DcttWxoEEn