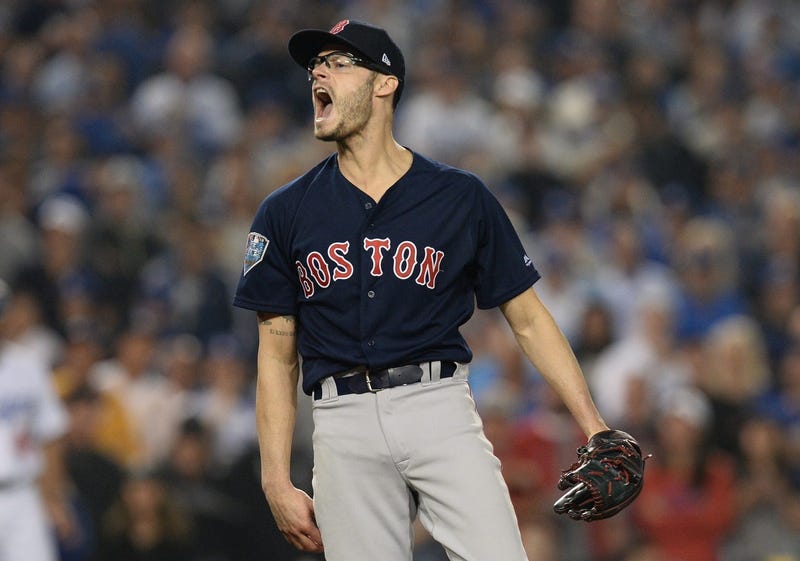 LAS VEGAS -- The way things are shaping up, Joe Kelly seems to be scratching where a new breed of front offices itch.

In previous offseasons, a 30-year-old reliever who was hitting free agency coming off a season with a 4.39 ERA and three full months of bad wouldn't exactly be jumping to the top of teams' priority lists. But in recent weeks it's becoming clearer that when it comes to relief pitching, this isn't going to be your typical free agent merry-go-round. And that's why Kelly is feeling at ease with his situation heading into this week's MLB winter meetings.

Teams are courting Kelly not only as the guy who dominated in the postseason but as a perfect representative of the kind of reliever teams are starting to crave.

"There’s a different aspect I didn’t think I would be viewed, in a positive way that I’m a little surprised by," Kelly told WEEI.com Sunday night by phone. "I would say it’s not what expected, but in a good way. It was pretty cool to see. It’s not that teams are pointing out my negatives. The smart people in baseball … People have been understanding and diving deeper. They have been understanding about the changes I made, which obviously were a little too late in the season which was something I regret. I regret we found it out a little bit late. But obviously, we won the World Series so that’s the positive side. But it’s cool seeing people understanding why I was successful and what I did and how I will now I’ll do that, which is something I have a good grasp on."

He added, "It’s just been about not only makes sense but what I’m going to be most comfortable with. Just because something sounds awesome it’s going to be something I want to rush. I’m not going to panic and rush to make a decision. I’m just very comfortable where I’m at."

Since the end of a postseason run that saw Kelly allow just one earned run over his 11 1/3 innings -- striking out 13 without walking a batter -- the righty's existence has included checking in with his agents Sam and Seth Levinson three or four times a week, usually just before going to bed for the evening.

The messages have been encouraging.

Heading into the winter meetings there are at least four very strong suitors, with three others who would be considered possibilities and then another group Kelly probably would put on the back-burner because of a perceived inability to win any time soon. According to the pitcher, the Red Sox would be considered one of the stronger candidates.

"The way the approach has been and the conversations from Day 1 it has been exactly what had been mentioned to me. We feel comfortable with the Red Sox and we respect them and they respect me as a player. It’s been great. There has been great communication. It’s been wide open. It’s been better than I thought as far as communication, which is great to see. Every team has a plan going into the offseason. Some teams jump ship from a plan but some teams stick with a plan and some teams have a little gray area. The Red Sox are one of those teams with a plan. That’s why they’re such a great organization. And their plan has gone how it has gone, and our plan has gone how it has gone and if it matches up it matches up. It’s definitely one of those things where I’m open to playing for the Red Sox. But it’s been fun to see other kinds of aspects of the game, forecasting and explaining what I did with other people."

It has been the aforementioned opportunity to explain himself that has been the most gratifying aspect of the process for the free agent.

For some clubs, it might be difficult to buy into a pitcher who carried a 5.52 ERA from June through August. But Kelly has been allowed to tell his story in person, a tale which included making some significant changes just before the conclusion of the regular season. In somewhat of a twist, the general managers are getting the explanation directly from the player.

There was the different way he came set on the mound, helping avoid tipping his pitches. The recognition that his top-half was overcompensating, with a lead foot coming down on the mound a completely different place. And, of course, the morphing of his curveball and slider into one pitch, a slurve. ("I thought I couldn't throw that pitch because it looks loopy," he explained.)

"It’s not weird. It’s something I’m passionate about," Kelly said. "When I start talking about something I love and educated about it’s easy for me to speak to people. It might be eye-opening for people not just thinking, ‘This guy throws 100 so he’s going to throw a fastball every time.’ People probably get that idea about me. But the way I pitched at the end of year they understand there is stuff behind it, so when I talk about it myself it helps a lot. It’s them seeing I’m educated on it and I’m not content where I am at this point in my career.

"It’s been fun to be able to speak with people. It’s been amazing. Communication has been great with the Red Sox. It’s just one of those things where we’ll see what is coming up this week. I feel very, very comfortable where I’m at today."

Teams have also evidently liked what Kelly is representing.

While some in the industry have suggested the market for late-inning relievers will be held up by Craig Kimbrel's market, that dynamic has proved to be apples and oranges. While Kimbrel would be lumped in with the pitchers pegged for ninth-inning work and little else, Kelly is getting the feeling teams are looking at things a little bit differently.

Clubs are truly on the hunt for pitchers who can do what he did in the postseason, pitch any time, any place and with very little warning.

"I’m one of those guys, and I proved it in the World Series, I pitched in different innings every single game and had the same success. I’m not saying other guys can’t do it. But I don’t need that dedicated routine where I have to stretch in the sixth, drink my coffee in the seventh and mentally prepare. It’s one of those things where they can say, ‘Hey, Joe you’re in the next batter.’ And I can go in and dominate because mentally I don’t need the same routine. Honestly, the less time the better for me. That’s what I realized as a starter because I had so much time. Doing scouting reports. Having anxiety leading up. Looking at the lineup. It’s one of those things where I think it fits best and it showed throughout the World Series. Any given role, when I’m right, challenging hitters, I don’t need to a routine. I’m not one of those guys who can’t have change to be successful. Just give me the ball when the big outs are needed. Once they call my name I’ll get checked in rather than going through a whole process. That’s never been my MO and I realized that as I became an older player in the league. The less thinking the better. I told them I just want the big outs.

"Ninety-five percent of players need to feel comfortable in their routine. That’s one of those things I could pretty much could care less about. As long as my body is loose, I’m ready to go."

It's the kind of flexibility he will continue to need while riding this roller coaster that is free agency.

"It’s just an educated forecast where I’m going to be," he said. "It’s not contingent at all where someone signs and then we’re going to see where Joe is at. I could be the first guy to sign or the last guy to sign. Nothing in between is going to impact my market or my value."