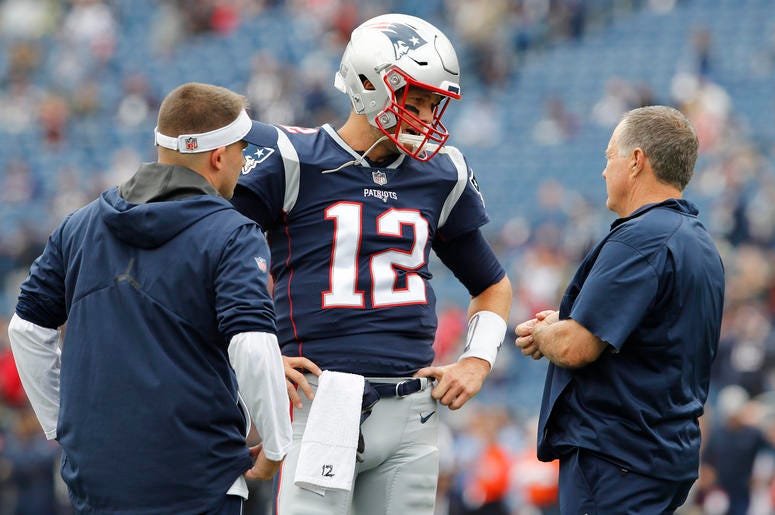 FOXBORO — A road Monday night game, followed by a physical battle with the Jaguars at home and then a trip to New England for a showdown on Sunday Night Football.

This is what the Chiefs have done the last several weeks, so it’s fair to say they could have had an easier road leading into Sunday’s battle for supremacy in the AFC at Gillette Stadium against the Patriots.

Despite the tough stretch, Kansas City is a perfect 5-0 on the year and has the second-best offense in football, averaging 35 points per game, a point behind the league-leading Saints, who are averaging 36 points a game.

Playing at Gillette Stadium on Sunday Night Football against Tom Brady and Bill Belichick surely is the toughest test they have had so far this year and they also have a few more things going against them, too.

“It should be a great atmosphere for a football game,” head coach Andy Reid said on a conference call Wednesday. “That stadium will be loud and rolling. So, this is why you go through the whole process of getting yourself ready as a player and as a coach. But, players go through a tremendous process of getting themselves ready to play in games like this.”

First off, for as good as quarterback Patrick Mahomes has been to start his career, Belichick typically feasts on young, inexperienced quarterbacks.

According to NFL Research, the last eight quarterbacks with 10 or fewer career starts prior to starting against the Patriots have gone 0-8 with six touchdowns and eight interceptions. Sunday will be just the seventh career start for Mahomes.

Also, the Chiefs defense is likely going to be without two of its better players.

Linebacker Justin Houston, who left Sunday’s game against the Jaguars with a hamstring injury, is unlikely to play, and then safety Eric Berry still hasn’t played a game since Week 1 of last season as he works his way back from a heel injury. The safety didn’t practice Wednesday so it seems like his debut may need to wait at least another week. These players missing the game would be a huge benefit for the Patriots who will likely need to score all the points they can going up against such a high-powered offense.

So, it’s pretty clear the Chiefs have a lot of things working against them, which means the Patriots should win, right?

Given all the factors previously mentioned, along with having an extra day to prepare following last week’s Thursday game, the Patriots have a lot of things going their way. If this Patriots team is as good as most believe it to be, there’s no reason why they should not come away with a win. Certainly, the Chiefs are good across the board, but so are the Patriots, who are coming in winners of two straight games and playing their best football of the season.

With Kansas City coming in 5-0 and the Patriots 3-2, a loss would put New England three games out of the No. 1 spot in the AFC and four games including the tiebreaker. With this being Week 6, it isn’t a must win when it comes to getting homefield advantage, but making up four games in 10 weeks is no easy task, especially if they already have three losses.

While Belichick wouldn’t acknowledge the game having any extra meaning at his press conference Wednesday, given the circumstances it definitely does, and the Patriots usually win these games.

"We’re really going to see where we measure against a team that is playing as well as any team in the NFL, probably the best in the NFL,” Brady said Monday night to Jim Gray on Westwood One Radio. “I am looking forward to it. I know it is still early in the week and we have a lot of prep to do, but there will be no shortage of urgency and focus this week. We’ll be fired up and ready to go.”

If Sunday’s game is anything like ones we’ve seen in the past, the Patriots will take full advantage of having things go their way and come away with a statement win. But if they don’t come out on top, maybe this isn’t the team we’ve come to expect.

Time will only tell.