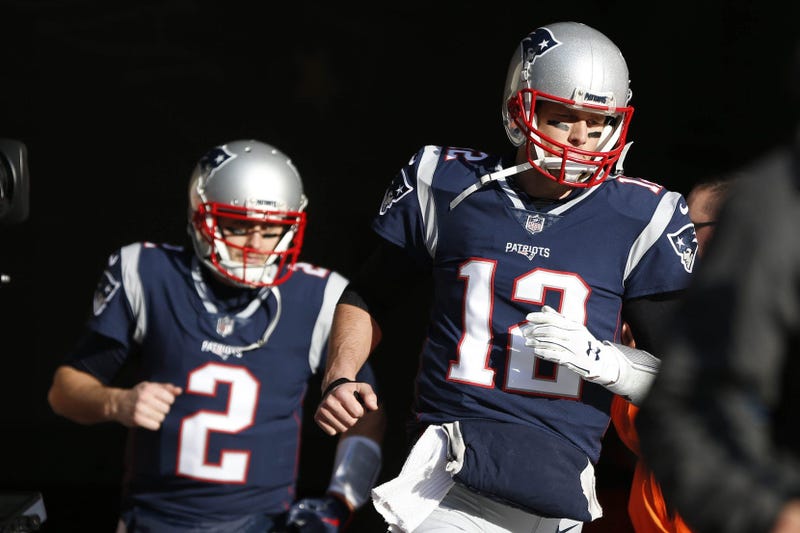 The NFL draft has come and gone, and although there was a rumor the Patriots may have been interested in trading up to land Baker Mayfield, it didn’t happen.

New England did land LSU quarterback Danny Etling, but that was in the seventh round so the chances of him being Tom Brady’s successor are slim-to-none. So, where does the franchise go from here when it comes to finding its future franchise QB?

Brady is only signed through 2019 and there are no signs of him signing an extension in the near future, but it does seem like the quarterback wants to play beyond two years from now.

"I have personal goals. I want to keep playing,” he said at the Milken Global Conference in California on Monday with Jim Gray moderating. “I’ve said for a long time I want to play to my mid-40s. I was told three years when I was 36-37, 'You can't keep playing, no one wins Super Bowls [at that age].' It's a great challenge for me. I think I've been challenged my whole life. I feel like I can do it."

What might be the biggest thing preventing Brady from reaching his goal? Nothing on the field, rather at home with his wife Gisele Bundchen.

Brady said he’s negotiated with her to play two more years, but obviously he wants more to reach his goal.

"I've still got a few more, you know, a little further to go,” he said.

Bottom line, the Patriots could be needing a new quarterback as early as the 2020 season.

Without drafting a quarterback high in this year’s draft, if they were to select one high in the draft next year, there’s no guarantee he would be ready to start in 2020. This leads to the question of what are the other alternatives?

What if the Patriots pegged a quarterback off a current roster via trade, or even signed a free agent coming off their rookie deal?

This is a possible scenario that hasn’t been talked about much and it could actually happen.

Packers backup quarterback Brett Hundley is a free agent after the 2019 season, coincidentally when Brady’s contract is up. This could be the same type of situation as the Patriots were in with Jimmy Garoppolo last year. With Aaron Rodgers being just 34 years old, he seems likely to play beyond the 2019 season, so would the Packers be willing to pay Hundley a starter’s salary as a backup?

We all saw how it played out with Garoppolo last year, so maybe the Patriots would try and do the same thing the 49ers did to them. (We're not saying the two are the same player by any means, just their situations are the same.)

Hundley is UCLA’s career leader in both total offense and touchdown passes. He appeared in 11 games last season because of Rodgers’ injury and had a 61 percent completion percentage, while throwing for 1,836 yards, nine touchdowns and 12 interceptions.

What about some recent quarterbacks drafted that may not have a fit with their current team in a few years and a trade could be made? C.J. Beathard, Nathan Peterman, Cody Kessler and Paxton Lynch, or even a few of the QBs selected this year come to mind.

While it is too early to figure out exactly who the Patriots could target given anything could happen with their situations with their current teams, it may be time to give this scenario more thought. The Patriots don’t necessarily need to draft Brady’s potential successor.

The 49ers’ long-term situation at quarterback seems to be in a good place and the Patriots know a little bit about how that happened, so why not try and go that route?