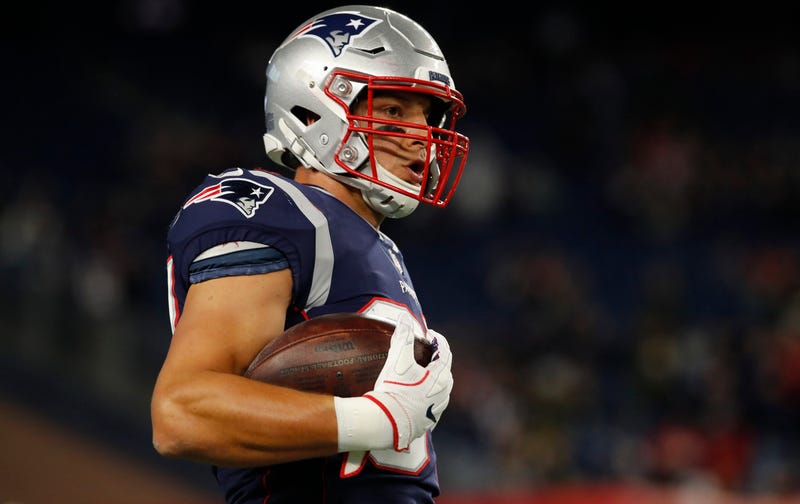 This is a very real thing as with all that has happened with the 29-year-old over the past year, it’s more likely than not that he will not be in a Patriots uniform beyond this season.

Not only has his body taken a beating over the years, which forced him to contemplate retirement last offseason, he’s also not looked close to the same player of a year ago this year. Whether it is injury-related or not, Gronkowski is being treated by opposing defenses as just an average tight end. There have been no double teams or any extra attention the last few weeks and he hasn't been able to take advantage.

Since sitting out three out of four games prior to the bye, Gronkowski has six catches on 11 targets for 82 yards and a touchdown in two games. He’s still yet to catch a pass in the red zone this season.

On Wednesday, Bill Belichick was asked to characterize the depth at the tight end position.

“It's the same as it's been all year,” he said. “No changes that I'm aware of. What happened?”

While he’s right nothing has changed, that may be the biggest problem. The Patriots have the same tight ends — Gronkowski, Dwayne Allen and Jacob Hollister — as they did a year ago. That is not good when it comes to the next couple of years.

Understanding the drafts haven’t exactly been loaded with tight end prospects in recent years, the Patriots have missed out on the potential to get a decent one in place to prepare for life without Gronkowski.

In 2017, George Kittle wasn’t selected until the fifth round, so even though the Patriots didn’t have many top picks that year, they still could have landed one of the best young tight ends in the game right now. He was on their radar having many similar traits to what the Patriots look for in their pass catchers.

Then this past draft, there were several players who the Patriots passed on in various points of the draft: Hayden Hurst (Round 1, No. 25 overall, Mike Gesicki (Round 2, No. 42 overall), Dallas Goedert (Round 2, No. 49 overall) and Mark Andrews (Round 3, No. 86 overall). We’re not saying any of these players were locks to work out, but they would have at least given the Patriots someone to rely on post-Gronkowski.

It just seems like the Patriots have ignored the life without Gronkowski topic. Since 2012, the Patriots have only drafted two tight ends: A.J. Derby (2015, Round 6) and Ryan Izzo (2018, Round 7). Derby is now with the Dolphins and Izzo is on injured reserve.

There is always the free agent or trade route, but what team is going to let a good tight end go?

There’s always the slim chance Gronkowski returns, which honestly may not be the worst thing in the world considering what the alternatives might be and if Brady is still around. The only thing is he certainly would need to take a pay cut as he is on the books for a base salary of $9 million and a cap hit of $12 million.

For what he’s produced this year, he’s not even close to being worth that.

It should at least be brought up that maybe the Patriots are changing their offensive philosophy and aren't valuing the tight end position like they once did. Perhaps they are switching things up and now are valuing running backs. That could explain the Sony Michel pick, which many questioned at the time. If this is the case, it would at least give some explanation to why a Gronkowski replacement hasn't been brought in because they have known for a few years the end is near.

As much as the topic likes to be avoided, it is a real thing. Life without Gronkowski is getting closer and closer and the Patriots don’t appear to be ready at all.