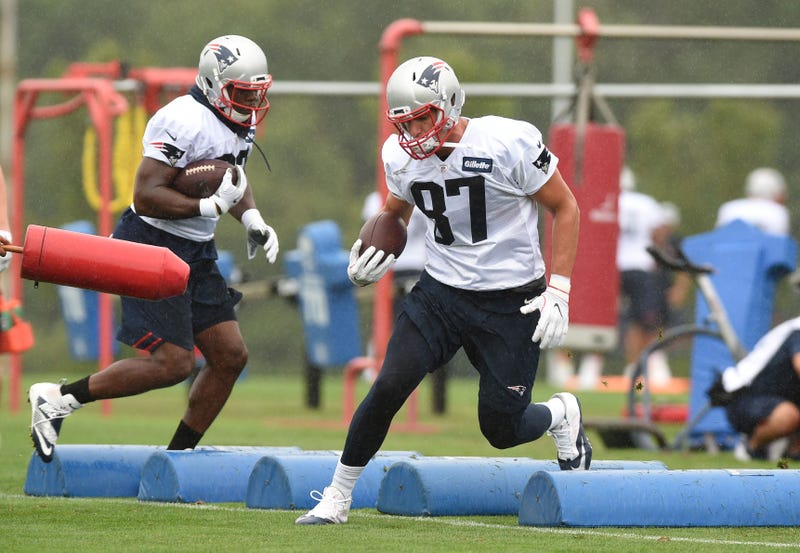 FOXBORO — Rob Gronkowski was a much different player at the first training camp practice last year than this year.

Not with how he performed, as he was dominant in both sessions, but with the way he acted.

Last year, Gronkowski was high-stepping and celebrating after almost every catch even in the least competitive drills, but on Thursday there was no celebrating. The tight end could not have been more business-like, as he showed little-to-no emotion after his catches, which included a few touchdowns from Tom Brady in red zone work.

So, what’s the reason for the stark contrast? Wanting a new contract.

Gronkowski is on the books for $8 million this season, which has him as the fourth-highest paid tight end in the league. And not only that, there are 22 receivers making more money than him this season.

That needs to change and he knows it.

When speaking at mandatory minicamp in June, Gronkowski joked around a lot, even for him, and also said flat out he was looking for a new contract hoping it would get done before the start of season.  Fast forward to Thursday, Gronkowski was singing a different tune on the subject when asked.

“I’m just focused on getting better and it's just internal – internally with stuff like that,” he said.

That isn’t typical Gronkowski speak, which means there’s likely a reason for it. Again, wanting a new contract.

Back in April when Gronkowski declared he would be back for the 2018 season after not being able to commit immediately after the Super Bowl, that came following a meeting between the tight end, Bill Belichick and agent Drew Rosenhaus. This also came two days after Gronkowski’s Monster motocross press conference at Gillette Stadium when he essentially made fun of the Patriots’ offseason program.

After an offseason of little irritable things (Instagram posts, etc.), that was likely the last straw for Belichick with Gronkowski and ultimately why the meeting was called.

Even Belichick, who wouldn’t give a penny more than what he believes a player is worth, would admit Gronkowski deserves more than his $8 million for this coming season. But, after the way Gronkowski acted this offseason, and missed the entire voluntary offseason program, it would not send a good message to give him a new deal prior to training camp.

How would the players who did attend all the spring workouts feel?

It’s also worth noting Rosenhaus’ presence at that meeting. Why would he be there if it was simply telling Gronkowski to knock it off with all the shenanigans? Perhaps, a new or restructured deal was worked out then.

Regardless, it wouldn’t be a shock to hear Belichick wanted to see Gronkowski the first few days of training camp to not only make sure he’s healthy, but that he has the right attitude and isn’t throwing footballs into bushes celebrating like at one minicamp practice. Aside from having fun and enjoying life, Gronkowski’s desire to be paid is next highest on his list of importance.

Not much would keep Gronkowski from having endless amounts of fun and spiking footballs on the field, but getting a new contract and more money would.