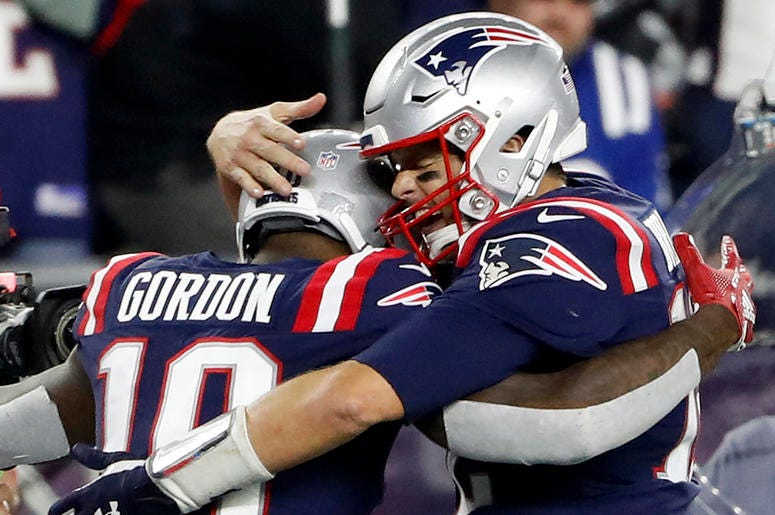 FOXBORO — Through five games, it hasn’t exactly been a typical year for Tom Brady.

The Patriots quarterback is usually right up there at the top of the league in all statistical categories, but that just hasn’t been there to this point. Brady is 121-for-179 with 1,259 yards, 12 touchdowns, six interceptions, and a QB rating of 96.1. He is only in the top 10 in touchdown passes.

Another area where he’s had issues is on third down. The 41-year-old is 23-for-41 (56 percent) with 291 yards, six touchdowns and two interceptions. Completing just over 50 percent of third-down throws is very un-Brady like.

So, what’s been the reason for the below average numbers? It’s an easy answer: the lack of depth at wide receiver.

With Julian Edelman suspended the first four games and Josh Gordon not playing in a game until Week 4, Brady had Chris Hogan as his No. 1 option with Phillip Dorsett and Cordarrelle Patterson behind him. The 41-year-old was basically operating with just these three wide outs, most of whom were asked to do more than they were capable of, and it clearly impacted his play.

Prior to last week’s game against the Colts, only 37 percent of Brady’s pass attempts were to wide receivers.

It’s no coincidence Brady has his best game of the season last week against the Colts when Edelman returned and Gordon has been integrated more into the offense.

“I would say at the receiver position to add the depth and quality that we have in a short period of time is great for that group,” Brady told Jim Gray on Westwood One Radio Monday night. “You can rotate guys in and out — guys have different skill sets. It makes it tougher for the defense to defend, along with the running game that has really picked up. We’ve scored 38 points the last two games, and I felt we left a lot of points on the board last week against Indy.”

Brady also detailed his chemistry with Gordon, which showed up on his fourth quarter, 34-yard touchdown catch Thursday night against the Colts.

"Yeah, I saw him kind of break free," Brady said on Kirk & Callahan Monday. "I saw the guy underneath him and he took a good angle at the pylon and when I threw it I thought that he could get his eyes on the ball before the defender could just based on the position and that's what ended up happening. Josh went up and went through both those guys to make the play. Again, I think I said after the game, it just speaks to the trust I have in him in a very short period of time to make those plays.

"I mean, I've watched him play for a long time, we played against him and just seeing him on the practice field you make those type of throws when you believe that your guy is going to come down with it. It was a huge play in the game and we needed it at the time. We kind of sputtered there in the third quarter there with the turnovers and we needed a big play and it was great to see Josh come up with that."

One of the biggest things that has made Brady and the Patriots offense so successful over the years is the number of options in the passing game. Defenses haven't been able to focus on stopping just one or two different players, but that was what was taking place over first couple weeks of the season, notably with Rob Gronkowski.

It was assumed Edelman’s return would help Brady out -- after all, he’s been one of his most dependable targets over the years -- but one could argue Gordon’s presence has helped the most. Having Gordon on the field has made everyone better.

Even though he’s been on the field for just 18 snaps in each of his first two games, his impact has been made with his ability to draw the attention of opposing defenses. Running routes on the outside draws him one cornerback lined up across from him and usually the safety has to shade that side of the field. This has opened things up over the middle for players like Gronkowski and now Edelman.

This will only get better with time as more and more gets thrown on Gordon’s plate and the trust between he and Brady continues to grow. The fact two of his four catches have come on third down show he is already earning Brady’s trust, which can be tough to crack for newcomers.

Now with a more than adequate group of receivers and a running game that has averaged 136 yards the last two games, Brady’s numbers should begin to climb, and climb quickly. After a sluggish start, Brady appears back.

Well, he never really went away -- all he needed was a few capable wide receivers.