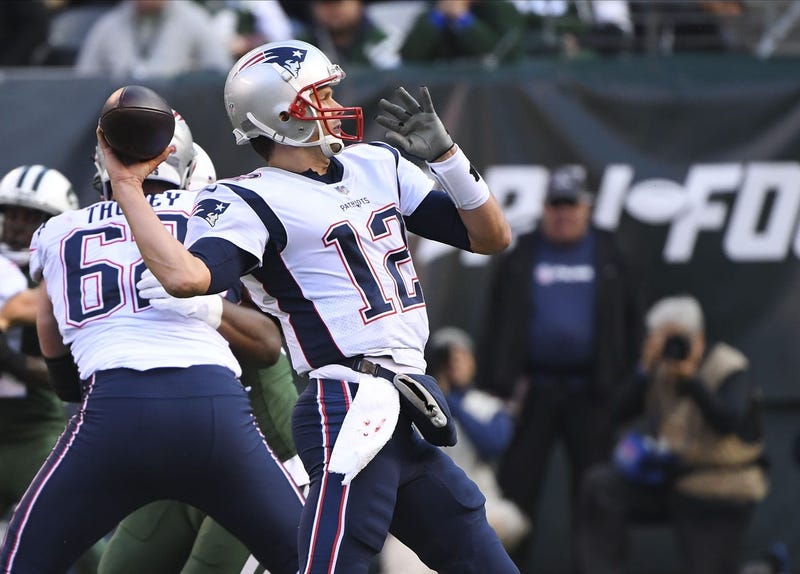 Let’s make this clear before we go any further: Tom Brady is not the same player as he was a year ago and he’s showing some signs of being 41 years old.

We’re not denying that.

But, with that being said, Brady is closer to playing like he did last year, in which he won MVP, than you may think.

Brady was marginally better statistically last year than he is this year — there’s no denying that — but consider what he’s working with this year. Also, it doesn't help that some of the other quarterbacks in the league -- Drew Brees, Patrick Mahomes, Ben Roethlisberger and Jared Goff -- are basically having career years.

If Brady had the same weapons this year as he did last year, he would probably be putting up similar numbers as he did a year ago. The 41-year-old isn’t really playing much different than he was a season ago, it’s more about what is around him and what he’s been forced to deal with.

It’s been a lot different this year not only from a talent level, but a consistency level with players missing a number of games for various reasons — suspensions, injuries, or just joining the team late.

What a difference a year makes. And maybe the biggest thing is how inconsistent the offense has been from week-to-week and how hard that’s been on Brady.

Edelman was suspended for the first four weeks. Then because of a poor offseason with wide receivers not working out, getting injured during training camp, etc. the team needed to swing a trade for Gordon after Week 2. And last but not least, Gronkowski has been battling nagging ankle and back injuries since the early part of the season and has really only looked himself during Week 1.

The offense has changed so much just in a 11-game period.

Even a 30 or 35-year-old Brady would have had trouble with this offense just because of the lack of stability. It’s hard for him to get on the same page and in any kind of rhythm when his playmakers haven’t been on the field very much and it’s been a lot of piecing things together as the weeks have gone on.

Last year, it was very much the same from Week 1 all the way through Week 16, and that means a lot for a quarterback.

The two biggest differences from last year are having Gordon instead of Cooks and Patterson instead of Amendola.

There’s no doubt Patterson is a major step down from Amendola. Patterson has been nice to have due to all the injuries and his versatility, but he’s not a game-changer by any means. Amendola’s chemistry with Brady was something only a few receivers ever to come through New England have ever had.

Cooks vs. Gordon is a good debate because their numbers are essentially the same if Gordon’s numbers are drawn out over a full 16-game season, but Cooks was much more valuable to Brady and the offense. Yes, Gordon is a freak athlete and can catch almost anything, but he can’t stretch the field like Cooks was able to, and his knowledge of the offense isn’t the same. A lot of that has to do with Gordon coming aboard after Week 2, but he can really only run three or so routes. Cooks was able to open things up more for other players in the offense and stretch the field, while Gordon isn’t really able to do either of those.

Cooks was much more valuable to Brady and the rest of the offense than Gordon has been. Cooks was under-appreciated, myself included.

The majority of Brady’s issues this year have been centered around his lack of trust in his receivers, which is not on the quarterback. That is on the Patriots for an over-reliance on Brady to carry the offense with the collection of weapons he’s been given, and then an element of bad luck with injuries. Not replacing/bringing back Amendola may have been the biggest mistake of the entire offseason.

Bottom line, Brady really isn’t playing much different than did a year ago, it just comes down to what he’s been given to work with and that has been the reason for his slight dip in play.