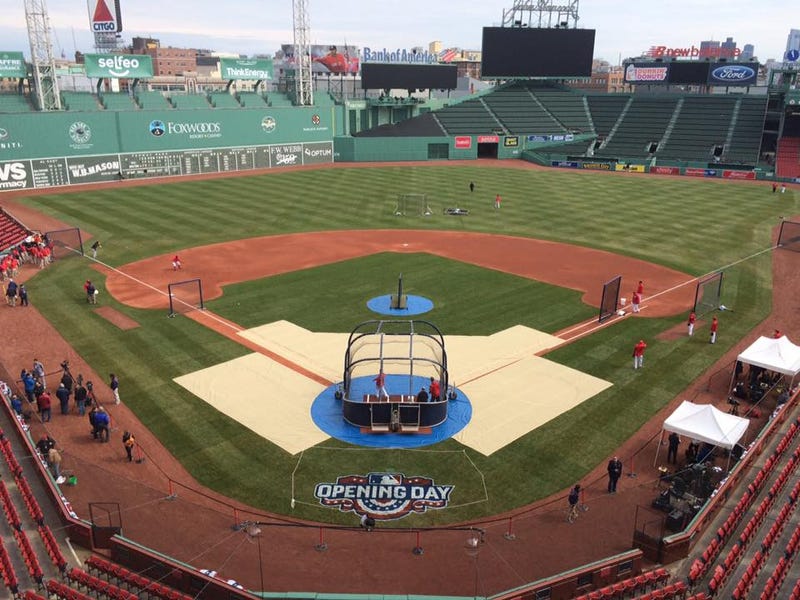 The Boston Globe reported this week WEEI was thinking about making the Red Sox radio broadcasts sound more like a sports talk radio show in the wake of Tim Neverett’s departure. At the risk of coming off like a company stooge, allow me to clear up some misconceptions.

To start, WEEI is not changing the format of Red Sox broadcasts. "It’s never been our intention to turn the broadcast into a talk show,” program director Joe Zarbano told WEEI.com on the phone Thursday.

The official job posting, which was forwarded to WEEI.com, stresses the importance of play-by-play experience:

“WEEI, Boston’s legacy sports radio brand and the winner of the 2018 Sports Station of the Year Marconi award, is seeking an experienced and talented individual to be the next play-by-play announcer on the WEEI Boston Red Sox Radio Network. The candidate selected for this dream job opportunity will sit alongside Red Sox Hall of Famer Joe Castiglione in the broadcast booth.

“The ideal candidate will have vast experience doing play-by-play for a professional team, an inherent understanding of the passionate Boston sports fan base, and an innate ability to be able to describe what’s happening on the field in an entertaining and compelling fashion.

“This is not an entry-level position. Only the best should apply.

“Qualified candidates should send a resume and a link to audio samples (no attachments please) to Joe Zarbano, Program Director (JZarbano@WEEI.com).”

The discussion around this topic has been centered around extremes. “Albert in Rhode Island” is never going to call in after the 2-1 pitch and yell at Joe Castiglione about Deflategate. Nobody is suggesting that.

But there is room for more opinion. Maybe some discussion around whether Alex Cora should’ve pinch-hit in a specific spot, or if the team is approaching the trade deadline properly.

The best sports broadcasts, whether they’re on TV or radio, have a conversational feel. The game remains paramount, but there are engaging discussions about league- or team-related issues. That’s what Lou Merloni, who served as an analyst for Red Sox radio this postseason, says he tries to bring to the booth.

“For me, it’s never the extreme,” Merloni told WEEI.com in a phone call. “It’s not going to be a talk show. It’s more about having conversations within the game and continuing them. If there’s a good story being told and it’s just squashed by the pitch and never revisited, I think those are missed opportunities to make the broadcast a little more engaging and entertaining. But I don’t think it’s the extreme people are thinking of –– ‘Oh, talk show. It’s only going to be opinion, they’re going to stay away from the game.’ It’s not going to be that, or I don’t think it would be that.”

The idea of opening up the broadcast to allow more conversation is not revolutionary. In fact, we don’t have to look far to see it accomplished at a high level. NESN’s crew, whether it’s Dave O’Brien working with Jerry Remy or Dennis Eckersley –– the dream team is all three of them calling games together, which we occasionally saw last season –– have entertaining exchanges with each other and give opinions about the action on the field.

And when Remy or Eckersley say something, O’Brien usually asks follow-up questions. His lifts his nose up from the media guide once in a while.

Since TV viewers can see the action for themselves, announcers obviously have more leeway to ignore tedious pitches or routine plays. On radio, conceivably, listeners still want to hear the action.

But Merloni says there’s a way to call the pitches and not allow mundane matters to trample an anecdote or opinion.

“On radio, you would still describe it,” he said. “It wouldn’t be, ‘Oh, it’s 3-2,’ and you haven’t announced whether it’s a ball or a strike. I think you do have to explain ‘ground ball to short’ and things like that. But ‘the wind up, the pitch, he steps off the rubber’ –– that stuff is kind of slow-moving. I think you’ve got to realize people’s attention spans. They’re looking for more.”

Dale Arnold agrees with Merloni’s diagnosis, citing the broadcast he did this season with Roger Clemens in Houston. While that was a special event centered around Clemens, it showed how personalities in the radio booth can provide additional entertainment on top of the game itself.

“It has to (have a conversational feel),” Arnold told WEEI.com on the phone. “Having done five sports in this town, baseball is by far the slowest. There is so much time between moments of action. If all you’re going to do is call the action, it’s going to suck. This isn’t like a hockey or basketball game where it’s non-stop. You don’t have time to work in much chitchat. In baseball, you have all of the time in the world. If all you did was call balls and strikes, and didn’t do anything else, it would be pretty lame.”

The game will always be the centerpiece. But that doesn’t mean there can’t be more.

Dale and Lou say they’re not interested in Red Sox job: Dale and Lou both say they enjoy calling Red Sox games on the radio. But neither is advocating for the open job.

Dale told WEEI.com he doesn’t want to give up his gig with NESN as Bruins pre- and post-game host, and Lou said he wants to spend more time with his family.

“As much as I love doing games, even 2-6 is a transition for me and my family right now. I don’t think I’m interested right now,” he told WEEI.com. “I like our show. I like where it’s going.”

It looks like Joe Castig’s new partner will come from outside the WEEI family.

Terrible MNF game draws more Boston viewers than Celtics or Bruins: This week’s “Monday Night Football” matchup between the Vikings and Seahawks was terrible. It was 3-0 in the fourth quarter and neither team could seemingly gain more than five yards per play.

And yet, it still dwarfed the Celtics and Bruins here in Boston this week.

Vikings-Seahawks drew a 4.7 rating in the male 25-54 year-old demographic. Celtics-Pelicans, which was up against it, drew a 2.0. Wednesday night’s thrilling overtime win over Washington garnered a 2.1 rating.

The Bruins, meanwhile, attracted a 2.9 rating for their win Tuesday over the Coyotes.

This time of year, we’re all about football, just like almost every other sports city in the country.

Hall of Famer Bob Griese knew Belichick screwed up from the start: NFL Hall of Famer and Dolphins radio broadcaster Bob Griese called out Bill Belichick immediately when he saw Rob Gronkowski on the field Sunday for the Dolphins’ final play. “New England’s got Gronkowski down here,” Griese said. “He couldn’t tackle anybody.”

In a phone call with WEEI.com this week, Griese explained how he knew that Belichick had made a mistake.

“There’s two types of prevent defense,” he said. “There’s one where you put Gronk in when the opposing team is on the 40- or 50-yard line and the quarterback can throw the ball to the end zone, and Gronk is just going to knock it down, because he’s tall, big and plays the ball well. The other type of prevent is when the other team doesn’t have a chance to throw the ball into the end zone –– they’re on the 30-yard line like the Dolphins were. There, you would expect the offense to do a bunch of laterals. That’s no place for Gronk. When I say him out there, I said, ‘Well, they’re playing with 11 guys, but there are four guys rushing the passer, so once (the Dolphins) complete a pass, they’re out of the picture. Gronk is out of the picture. So basically, they had five guys (out there). They were throwing these laterals and there were only six guys who could tackle. That was my point.”