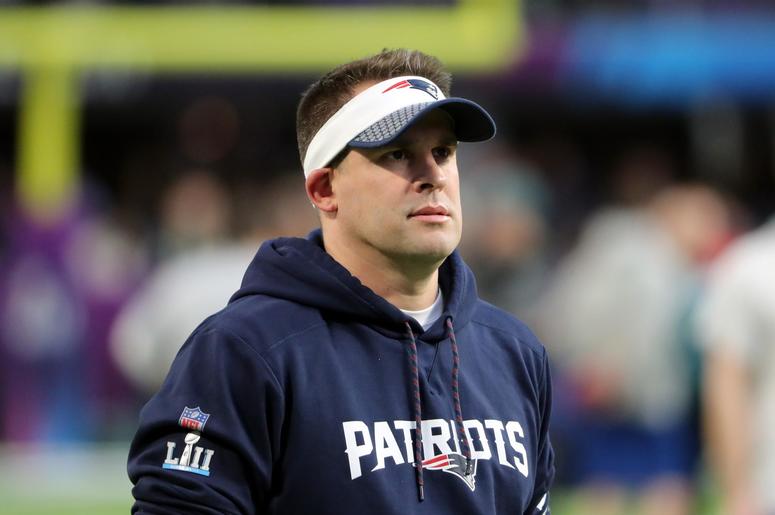 FOXBORO — The Patriots offense will be undermanned Sunday when it takes on the Texans in Week 1 without Julian Edelman and a depleted receiving corps, which only had three on the initial roster.

Others have been added since, but it isn’t the full complement of weapons Tom Brady is used to having, especially after losing receivers Brandin Cooks and Danny Amendola this offseason.

Without Edelman and having one of the worst groups of receivers Brady has ever worked with, on top of facing one of the best front-seven’s in football, offensive coordinator Josh McDaniels is going to need to get creative. He will need to find ways to get the ball out of Brady’s hands quick and into the hands of pass-catchers like Rob Gronkowski, Chris Hogan, James White, Phillip Dorsett, etc.

It isn’t like some games in the past where the Patriots could line up five-wide and just have Brady chuck the ball around. There’s much more to it.

Games like Sunday are why the Patriots should be thrilled McDaniels decided to stay in New England and not leave for the Colts.

“I think Josh McDaniels is the best in the game at what he does, game plan, week-to-week different plan, using different players in different spots,” Houston coach Bill O’Brien said on a conference call earlier in the week. “I think we’re going to prepare very hard but once the game starts, you know like the old saying goes, preparation is out the window.”

Houston’s secondary doesn’t even come close to their front-seven, so a major part of the gameplan will be getting the ball out of Brady’s hands quickly and into the playmakers’ hands.

McDaniels is great at creating deception for a defense and throwing a wrinkle or two at them. Don’t be surprised to see a lot of sets with two running backs in the backfield, likely Rex Burkhead and White, where a lot of different things can happen. It also wouldn’t be a surprise to see Gronkowski line up in the backfield in a few formations.

In addition, look for plenty of screen plays not only to running backs, but wide receivers as well. Cordarrelle Patterson is one of the fastest players in football, so it wouldn’t be a surprise at all to see a few plays called for him, like the receiver screens we saw in the preseason. While White is a running back, he may line up as a receiver on more plays than he does in the backfield as a way to create mismatches and also give the offense another receiver. Screen plays will be a great way to offset the terrific front-seven Houston has.

Gronkowski will also play a major part in the gameplan and McDaniels will need to find ways to get the ball in his hands with Houston’s defense focusing on him. On the contrary, he could use this against them.

If the Houston defense devotes the majority of its attention on the tight end, it could free up the middle of the field for players like Hogan out of the slot, which he torched the Texans on in Week 3 last season.

Hogan finished that game with six catches for 68 yards and two touchdowns. If the middle of the field is left open, that very well could happen again.

On paper, Houston has an advantage against the New England offense, but coaching can always offset talent and this is why McDaniels is such a weapon. He has the ability to put players in positions to succeed, even against the toughest units and toughest players.

“I really like the group we have. We’re working hard each day to get better and develop the chemistry we need in the passing game in particular. We’ll see how it plays out.”