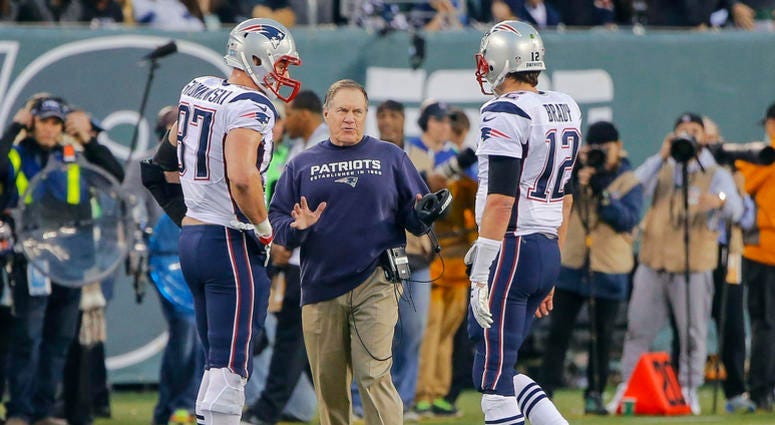 It’s exhilarating to follow the explosion of a big trade rumor. That’s probably more of a commentary on life’s monotony than the actual excitement one gets from reading words off a computer screen, but so be it. The Reddit posts and Twitter innuendo about bombshell Gronk news –– he’s getting traded! he’s retiring! –– kept my eyes peeled to my smart phone as sensible folks started their weekend with happy hour cocktails or long delays on the red line.

The rumors didn’t come from the usual sources. Adam Schefter was silent. The talk first emanated from a Patriots fan forum, where “Redditlover1981” announced he would share bombshell Patriots news Friday afternoon. Under usual circumstances, “Redditlover1981” would’ve been dismissed. But you see, he said Julian Edelman was going to get suspended for PEDs the night before it happened. The likelihood that ‘Redditlover1981” just made up the story and got lucky seemed “slim,” according to one dope.

ProFootballTalk ran an investigation on the guy, and found that he once defended Seth Wickersham’s Patriots reporting. They speculated he could be an ESPN employee, and had knowledge of the Edelman story before it broke.

“That makes total sense,” I thought, as I refreshed my iPhone in between spoonfuls of my burrito bowl drenched with sour cream and guacamole.

In a way, the fact that the rumor started on the underbelly of the Internet made it more fun to follow. When Schefter tweets something, the uncertainty is over. But this seemed … dangerous. It was big. It was major. It was, we had all decided, undoubtedly dark.

Then El Pres jumped in. The man who literally went to jail on behalf of Tom Brady’s honor said he was hearing that Gronk might not be a Patriot at the end of the day. Surely, Dave Portnoy of all people wouldn’t throw out Patriots rumors if they weren’t true. That’s it: the story was set in motion. Some of the beat guys started tweeting out observations about Gronk’s behavior during practices, in an effort to piece together signs of the apparently looming blockbuster.

This all appeared semi-legitimate, by the way, because of how believable it is that Bill Belichick would trade Rob Gronkowski. Gronk is precisely the kind of player who Belichick would move on from. He’s injury-riddled, keeps lobbying for a new contract and spent his offseason subtweeting the organization.

Speaking of Curran, he squashed the buzz at 1:34 p.m., tweeting there was no “imminent” Gronk trade. But the word “imminent” left an opening. Boston-based freelance reporter Adam Kurkjian, who used to cover the Patriots for the Herald, filled that void with a bombshell tweet: From multiple sources, here's what I have re: the Gronk rumors. Told Belichick wanted to trade him. Offers on the table w both the Titans and 49ers. He and Robert Kraft had a closed-door meeting to discuss. Tom Brady threatened to retire if the deal went through. Kraft nixed it,” he wrote.

Wow. Brady threatened to retire over Gronk trades. That is one series story. The report was followed with a denial from Patriots spokesperson Stacey James, who said with the “utmost confidence” that “none” of it was true.

Kurkjian defended his reporting Monday with “Kirk & Callahan,” saying he’s gotten several confirmations of the story since the tweet.

Predictably, there is lots of trash talk about how Kurkjian made up the scoop for fame and fortune. That is asinine. He would probably be blacklisted from every outlet in town if he fabricated a rumor of this magnitude. And in turn for ruining his career, he gets … a few thousand more Twitter followers? I can tell you first-hand that picking up Twitter follows during a stint of infamy is valueless.

Maybe Kurkjian got bad information. But there are probably people talking. Curran reported late Friday night the Patriots did discuss Gronk with other teams over the offseason.

“Redditlover1981” now says he has no inside knowledge and just got lucky on Edelman. He teased the big Pats news as a lesson for the media. How noble. He exposed that there’s clickbait on the Internet in 2018. Maybe for his next project, he should partner up with Jared Kushner and try to bring peace to the Middle East.

We have all lost our minds to a degree on social media. There is no doubt about that. But the Gronk trade rumors are just plausible enough –– age, injuries, retirement threats, contract talks, annoying tweets –– and that is the real reason why they gained traction. The Brady retirement stuff is harder to believe, but then again, it’s been an unprecedented year of weirdness in Foxboro. How many of us thought we would see the day when Brady only shows up to mandatory practice?

Gronk called the reports “fake news.” He might be right to a large extent. But it would be foolish to keep ignoring the signs of apparent discard. It is not a normal time in Foxboro. That becomes more obvious by the day.