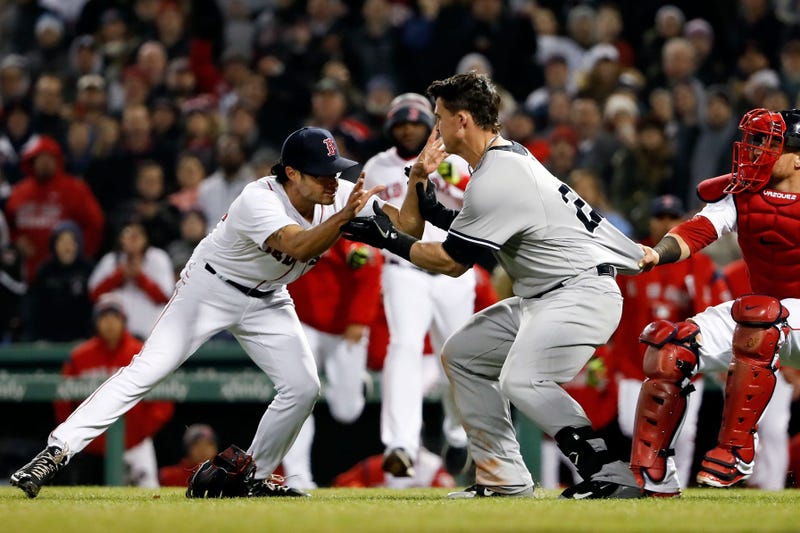 We have been buzzing all day about the Red Sox-Yankees brawl Wednesday. Joe Kelly is a hero for beaning Yankees no-name Tyler Austin with a 98 mph fastball, because Austin lifted up his spikes when sliding into second base four innings earlier.

Kelly, who walks nearly eight batters per nine innings, guided his blistering heater close to Austin’s numbers on the back of his jersey. That’s good. The unwritten rules of baseball say that’s exactly how delinquents like Austin should be punished.

But Kelly came within inches of breaking those unwritten rules himself –– and seriously injuring Austin in the process. The erratic right-hander nearly nailed Austin in the elbow, where he wasn’t wearing any padding. That likely would’ve knocked Austin out of action for at least a couple of weeks.

Or, even worse, Kelly wasn’t too far from plunking Austin in the neck or head. That could have endangered Austin’s career, if not his life.

Benches clear, punches thrown in Yankees-Red Sox after Tyler Austin is hit by a pitch from Joe Kelly. pic.twitter.com/wvqoak8QMV

Then Kelly would have been Public Enemy No. 1, just because his pitch was off by a little bit. So far this season, Kelly has missed the 17-inch strike zone with regularity. It’s a miracle he was able to land his beanball in an acceptable place.

Pitchers walk a fine line between being lauded and condemned whenever they decide to invoke their own justice on the mound. Today, sportswriters all over the country are waxing poetic about the return of Red Sox-Yankees bad blood. USA Today’s Bob Nightingale says there’s “plenty to love.”  In the high-minded New York Times, Tyler Kepner calls the bench-clearing incident “good for baseball.”

I dedicated an entire article to labeling the “heroes and zeroes” of the fracas. In it, I said MLB commissioner Rob Manfred and his lieutenants were probably exchanging high-fives when the benches cleared.

Our inclination to applaud the chaos is understandable. Baseball is much more exciting when the Yankees and Red Sox despise each other. The rivalry is no longer dormant.

But the nearly universal adulation of Kelly –– at least around these parts –– represents a strong look into how reactionary people are. Typically, we base our opinions around an action’s end result. It’s conceivable Kelly could have missed Austin and plunked him in the back of the head. The mistake wouldn’t make Kelly any less of a headhunter or maniac than he is today. The intention of the beanball, ostensibly to stand up for shortstop Brock Holt, would have been the same.

But Kelly would've been a pariah, labeled as one of the game's disdainful villains.

Austin's slide was a little dirty. But the potential consequences of hitting Holt in the leg with spiked cleats are far less devastating than the possible impact of a 98 mph fastball to the noggin or arm. If we were consistent, and I’m including myself in this grouping, it wouldn’t matter where Kelly plunked Austin with the baseball. The idea that one bad slide is worth getting attacked with high heat is outrageous.

But Austin wasn’t harmed. He raced to the mound and helped reignite the stale Sox-Yanks rivalry. We are distracted by shiny objects, or in this case, men standing around in stir-ups and cleats.