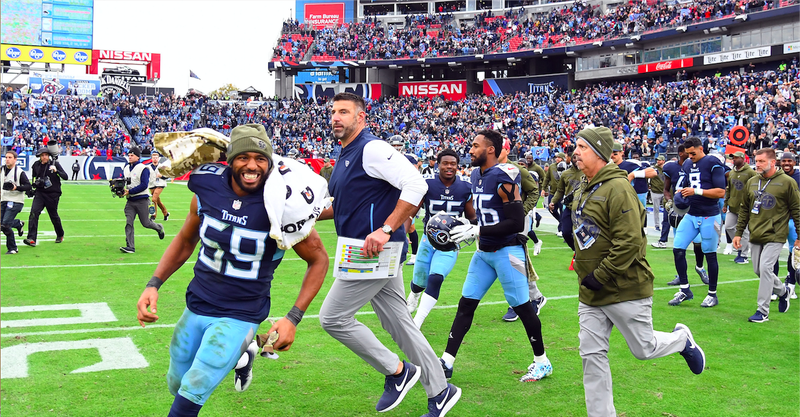 At the end of “Mean Girls,” high school bully Regina George is hit by a bus. Mike Vrabel and the Titans delivered a similar blow to the Patriots Sunday in Tennessee, sending the NFL’s chief tormentors into their bye week with lots to think about.

There have been other embarrassing losses in the Belichick-Brady era. Just go back seven weeks, when Matt Patricia’s Lions steamrolled New England 26-10 in Detroit on “Sunday Night Football.” But none of the Patriots’ previous gut-wrenching defeats packed the sheer amount of comeuppance the Titans delivered in their 34-10 drubbing. Tennessee flummoxed Tom Brady with an aggressive defensive game plan, sending pass-rushers up the middle all afternoon long. On the offensive side of the ball, the Titans called for two trick plays in the fourth quarter while up by three possessions, giving Bill Belichick a taste of his own medicine.

Afterwards, Dion Lewis pounded his chest, and mocked the Patriots for not spending money to retain their own players. Like so many other scorned ex-Pats, Lewis, who gave his heart and soul to the Patriots for three years, was not presented with a competitive offer when he went to free agency last offseason. He inked a four-year, $20 million contract with the Titans, joining former Patriots Malcolm Butler, Logan Ryan, Josh Kline and Vrabel in Nashville. Jon Robinson, who served as the Patriots’ director of college scouting, is the architect of this upstart Titans squad. Former New England defensive coordinator Dean Pees is also in charge of the Titans’ defense, and once again, he seemingly confounded Brady into submission.

During Pees’ time in Baltimore, the Ravens upset the Patriots at Gillette Stadium in the 2013 AFC championship and nearly pulled off another shocking win in the 2015 Divisional Round. Each time, the Ravens’ relentless linemen and linebackers overpowered the Patriots' offensive line. A similar scene unfolded Sunday in Tennessee, except instead of Haloti Ngata and Terrell Suggs bringing the heat, it was Jurrell Casey and Wesley Woodyard.

The 41-year-old Brady once picked apart blitzing defenses, but this season, he’s struggled to evade the pressure. According to STATS LLC, Brady is currently the 15th-ranked passer against the blitz. Over the last five weeks, he’s completed just 44.8 percent of his passes with no touchdowns, one interception and a passer rating of 56.4 when defenses send extra players into the pocket –– as the Titans did when Ryan sacked Brady on a Hail Mary pass attempt to close out the first half.

“A couple times (we confused Brady),” Ryan told NFL Media’s Mike Giardi after the game. “I wasn’t expecting that. It was a good job of our disguise, our game plan.”

The Titans were similarly aggressive on the offensive side of the ball. Even though Marcus Mariota entered the game with five measly touchdown passes, he attacked Stephon Gilmore, who couldn’t keep up with Corey Davis. The Titans’ wideout finished with seven catches on 10 targets for 125 yards and a touchdown against the Patriots’ best corner. It was the kind of performance we thought we would see from Butler, whom some Patriots writers maligned as the worst cover corner in league history prior to Sunday’s matchup. Curiously, the Patriots seldom threw the ball in Butler’s direction. Instead, Brady targeted Josh Gordon 12 times, and only four of those passes went for completions.

The Patriots got so desperate for offense, Josh McDaniels ran out one of his patented trick plays in the fourth quarter, sending Brady into the flat for a pass from Julian Edelman. While Brady caught the ball, he stumbled to the turf without getting touched. It was an embarrassing moment, and served as the perfect symbol for the Patriots’ laugher of a performance.

Tennessee delivered a little tit-for-tat on its next possession, with Mariota catching a pass of his own, and not awkwardly falling to the ground immediately afterwards. The Titans capped off their final scoring drive with Derrick Henry plowing into the end zone on a direct snap. The score expanded the Titans’ lead from 17 to 24. For years, NFL teams have watched Belichick keep Brady in for the duration of blowouts and continue to throw the ball down the field when the game is well in-hand.

There would none of that on Sunday, as Belichick pulled Brady with seven minutes to go. Vrabel was toying with Belichick.

Though the Patriots still stand at 7-3, they look vulnerable. All three of their losses have come on the road, where they continuously fall behind against lesser competition. Brady, for the first time, is beginning to look his age.

“That's what happens when you go cheap,” Lewis said after the game. "You get your ass kicked.”

It’s like he was speaking for the scores of Patriots who have been callously discarded from Foxboro. The Titans punched the Patriots back, and laid out a blueprint for the rest of the league to follow.