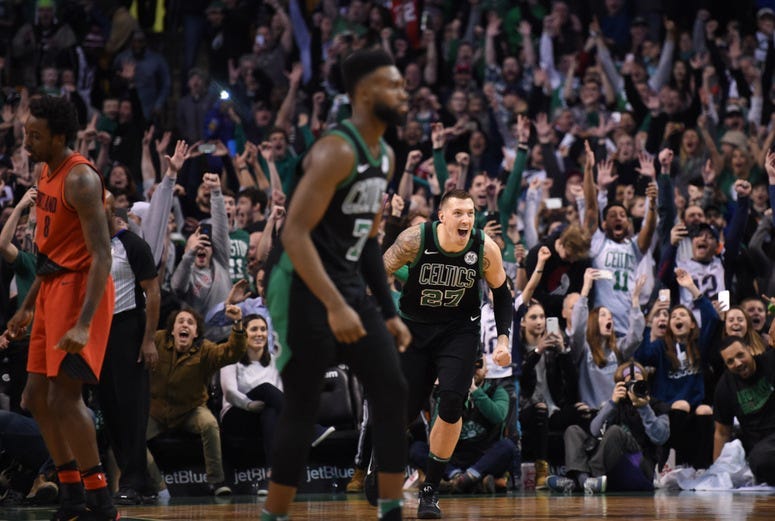 With all due respect to Philly's Joel Embiid and Ben Simmons, the Celtics are the NBA's real unicorns. They play in one of America's toughest sports towns, a place where fans and media renounce Bill Belichick over one questionable Super Bowl decision in eight tries, where the Red Sox win back-to-back division titles and still serve as a speed bag, where we ridiculously claim with the haughtiness of a Kardashian that anything short of a title isn't worth our time.

And yet the Celtics have managed to carve out an exemption from the misery. Their fans love them unconditionally as they've toed the line between contending (high expectations!) and overachieving (this is all gravy!).

Well, those days are coming to an end. It's about time someone told it like it is. Some of these grades will probably make your blood boil, but since no one else will do it and I'm already unpopular in these parts, prepare yourselves for a no-holds-barred, no-punches-pulled, someone's-gonna-be-whining-about-fake-news first half report card.

You've been warned. This is going to get ugly.

Kyrie Irving - AUncle Drew is one of the best shows in the NBA, and I'll admit I didn't realize just how many of his physics-defying feats take place while rooted to the floor. Irving doesn't soar over people so much as teleport around them. His wrong-footed layups, left-handed floaters, jab-step 3-pointers, and Double Dutch dribble penetrations make him wildly entertaining, but his leadership has anchored a young team that plays like a much older one.

Al Horford - AAverage Al? Try All-Star Al. Name another team where the center averages more assists than the point guard. The C's qualify, thanks to Horford's 5.2 assists per game (compared to 5.0 for Irving). The offense runs through Horford because he makes tremendous decisions. And when the C's need a big shot, he has delivered, whether it's the winning baby hook in the comeback over the Rockets, or the buzzer-beater to sink the Blazers.

Jaylen Brown - ABrown entered the NBA at age 19 last year and the Celtics eased him into the rotation. He went long stretches without playing major minutes, but showed enough flashes of potential -- a good game against LeBron James, some legit energy in the playoffs -- to suggest he had a bright future. The future is now. Brown is shooting .377 on 3-pointers while averaging 14.1 points a game, second on the team. Warriors star Draymond Green believes he should be an All-Star.

Jayson Tatum - ATatum should've followed the Brown Plan this year. Drafted third overall out of Duke, the 19-year-old was forced into major minutes after Gordon Hayward broke his leg in the opener. Tatum responded by leading the NBA in 3-point shooting for two months before a finger injury robbed him of his deep stroke. No matter. He still impacts games defensively and by aggressively taking the ball to the hoop. And just when it looked like he might hit a rookie wall, he stanched the bleeding.

Marcus Smart - AWhat you see as horrible shot selection, I see as offensive rebounding opportunities. What you see as ill-advised pull-up 3-pointers, I see as reasons to laugh in your face 25 percent of the time. What you see as a flawed offensive player, I see as someone who's on the floor in crunch time for a reason. Love him or hate him, there's no denying Smart's impact. He's the perfect complementary player. The Celtics are 18-2 when he plays between 20 and 30 minutes, and they've clearly missed him over the last 10 days.

Marcus Morris - AAcquired because of his history playing solid defense against LeBron James, Morris has emerged as the primary offensive option on a second unit that lacks scoring. His game may tend towards isolation plays, but he's adept at drilling jumpers off the dribble and he's hard-nosed. He chose team over family when he tried to throw down a thunderous dunk on his twin against the Wizards.

Terry Rozier - AWhat a revelation Rozier turned out to be with Irving and Smart sidelined. He recorded a triple-double in his first NBA start and then exploded for a career-high 31 points in his second. He also delivered one of the signature plays of the first half, a steal, drive, and dunk in the final seconds to shock the Pacers. His shooting may be hit or miss, but his effort is constant.

Aron Baynes - ABaynes consistently rates among the league leaders in defensive efficiency and it's easy to understand why -- All of Australia is a hard man to move once he plants himself in the paint. He provides more than toughness, however. The Celtics are 22-3 when he plays at least 20 minutes, and his offensive game -- elbow jumpers, pick-and-roll dunks, old-school ambidextrous hook shots -- makes him just enough of a threat not to be a liability.]

Daniel Theis - AI remember watching one of the last preseason games when Theis was blocking shots and knocking down 3s and thinking, "Is this guy actually pretty good?" Years of one-hit wonders like Greg Stiemsma had conditioned me to assume he'd disappear, but wouldn't you know that Theis is all kinds of useful. He's got tremendous hands for a big man and he plays under control. As he adds bulk, the 25-year-old should become an increasingly useful piece on both ends of the floor.

Semi Ojeleye - AAt some point, Ojeleye will make a 3-pointer, and then his offensive game will catch up to the defensive side of things, where the solidly built wing has earned himself crunch time minutes.

Brad Stevens - ANone of this happens without Stevens. No one gets more out of less on a nightly basis, as a recent three-game winning streak without Irving illustrates. Stevens has already drawn plaudits from LeBron for his creativity coming out of timeouts, and there's a reason the team never quits, even when faced with 20-point deficits. It's a joke that he hasn't yet been named Coach of the Year.

Danny Ainge - AEx-jocks rarely make great executives, but Ainge is the exception. His patience with the Brooklyn picks yielded Brown, Tatum, and Irving, a massive return for the decline years of Paul Pierce and Kevin Garnett. Another lottery pick likely lurks between this year's Lakers and next year's Kings, and when Hayward returns next season, the Celtics should be a destination for any veteran free agent who wants a shot at a ring. Hang his No. 44 in the rafters already.

Huh. Turns out this exercise was a little more difficult than I thought. I wanted to be hard on them. I really did. But the young, hungry, up-and-coming Celtics are cynicism-proof. Might as well just go with it.

news
Will you still need to wear masks at chains like Walmart and Target? This is where 15 major retailers stand
<img onerror="this.onerror=null; this.src='https://images.radio.com/aiu-media/og_775x515_0.jpg'; this.srcset=this.src