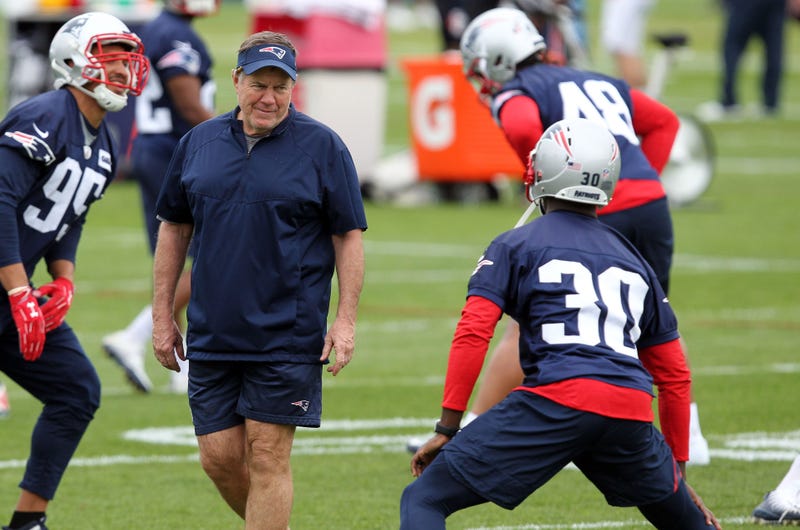 The NFL's new tackling rule may be flummoxing most of the NFL, but not Patriots head coach Bill Belichick. Why should he worry about a rule that punishes the tackling form he doesn't teach?

Making his weekly appearance on Ordway, Merloni & Fauria on Monday, Belichick suggested the rule shouldn't be a huge problem for his team, because he doesn't coach his players to lead with their heads.

"From my standpoint, there's really . . . it's not a change for us, for our coaching staff," Belichick said. "We've never taught tackling with the crown of your helmet, putting your head down, leaning your body forward in that type of position. I don't think fundamentally that's a good position to be in. It's not effective.

"We've always tackled with our head up, eyes open, head back, so we can see what we hit. That's the only way I've ever coached. If we do it that way, we'll be within the rules."

Belichick noted the speed and power of the game create a lot of bang-bang plays that will test the ability of a player not to instinctively drop his head.

"Fundamentally, we've never taught that in any technique," he said.

Belichick said the Patriots practice the fundamentals of tackling every day. He added that his team watched 25 plays selected by the league recently to better understand the rule, which bans players from leading with their helmets.

"It doesn't matter whether I like the rule or don't like the rule," Belichick said. "My job is to understand the rule and coach it."

In other interview highlights:

-- Belichick was pleased with the team's performance in a preseason victory over the Eagles, singling out the opening offensive (points) and defensive (3-and-out) drives of the game for praise, particularly after a slow start in the preseason opener vs. the Redskins. "Our team had good energy for the whole game," he said, "and that started with our first defensive series."

-- On the importance of solid fundamentals: "You can X-and-O all you want, but without good fundamentals, you probably won't have good plays."

"Some of our slot receivers have been very good, too," he said. "Troy (Brown) and Wes (Welker) and Danny (Amendola) and Julian (Edelman). We've had a lot of good players at those two positions. That's a good place to have good players for our quarterback.

"Those two positions, no matter who's played there over the last 19 years, they've really all been good," Belichick added. "James is right there. He does a good job."