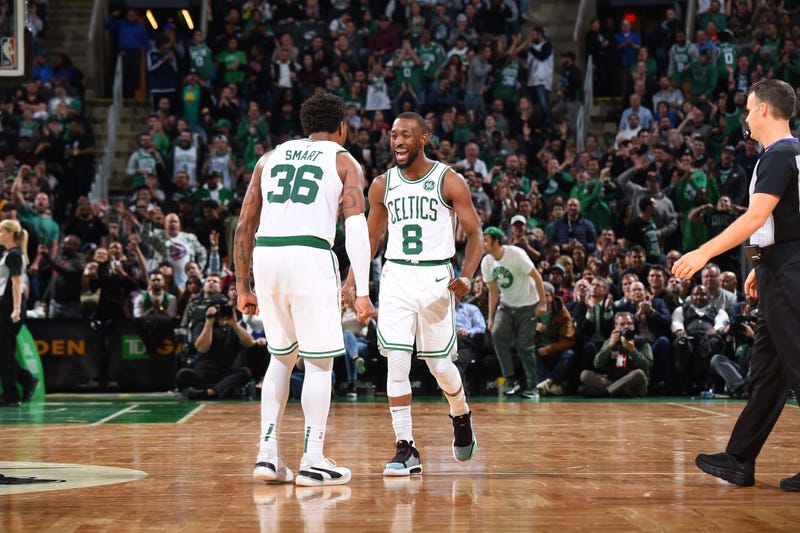 Boston made a statement when they knocked off the Bucks. The win over San Antonio showed the hot streak wasn’t simply a result of playing bad teams.

Monday’s win was significant, as well. In a different way, though.

While the Celtics were without Gordon Hayward — and will continue to be for the next six weeks — something else unexpected happened. Jayson Tatum threw up enough bricks to build a house, finishing 1-for-18 from the floor (0-for-3 from three).

Still, the Celtics found a way to beat the Mavericks 116-106. (For a complete recap of the Celtics' win, click here.)

Now, it helped that Kristaps Porzingis (1-for-11 from the floor, 1-for-4 from three) looked almost as bad as Tatum on offense. But the big man’s inefficiency didn’t stop Luka Doncic from going off for 34 points. And there were others on Dallas who helped pick up the slack.

So, best player on the floor was a Maverick, one of Boston’s top-two scorers was non-existent and Hayward is out — that does not sound like a recipe for success for the Celtics. This is the type of win that should catch the attention of the entire league.

For all intents and purposes, a good Western Conference team took on Tatum-less and Hayward-less Celtics and still lost by 10.

Kemba Walker (29 points on 9 of 17 shooting, 8-for-14 from three) doesn’t need to be the best guy on the floor every night, but he keeps showing he’s plenty capable. And he can beat a team beyond the arc, in the paint or at the free-throw line. He’ll take whatever the game gives him.

⏪ Kemba Walker went OFF in the 4th quarter vs the Mavs. Here's a recap pic.twitter.com/tDbEiQgauc

Jaylen Brown (25 points on 9-for-16 shooting) has been as consistent as anyone. He’s taken a back seat as a scorer when other guys are clicking, and pick up the slack as needed — the latter of which was the case on Monday. And he rebounded (11) well again.

Jaylen Brown has had enough of this game pic.twitter.com/y5RUGq8zW4

The idea of Marcus Smart shooting a lot of threes may send a shiver down Celtics fans spines, but, in truth, he’s a legitimate long-range threat. This isn’t a way of saying he’s a sharpshooter. But if teams want to leave Smart wide open around the arc, the Celtics shouldn’t hesitate to feed him.

I'm not saying this is absolutely witchcraft, but I'd like someone to tell me how it isn't. #Celtics. pic.twitter.com/T5wn54kv8G

The real issue the Celtics now present other teams with: how do you beat Boston when Tatum, Brown and Walker are all shooting well? And what happens when Hayward comes back?

“It just shows you how talented we are from everybody on this roster,” Smart said. “Those guys go down and everybody else steps up and had their opportunities and took full advantage of it.”

Hayward may be out for a while, but this team isn’t going anywhere.

“Of course it’s going to be tough, trying to make up for a player of Gordon’s caliber,” Walker said. “He’s a great player, but we also have guys who, you know, can do a lot to help this team. And you see JB, he stepped up and played huge. Smart, he’s always going to be him. JT, he didn’t have a great shooting night at all, but he stuck with the game and he’s only going to get better.

“Guys just have to step up their games and that’s just how it has to be, it’s all about the next guy and that’s what it’s going to be for us all year.”