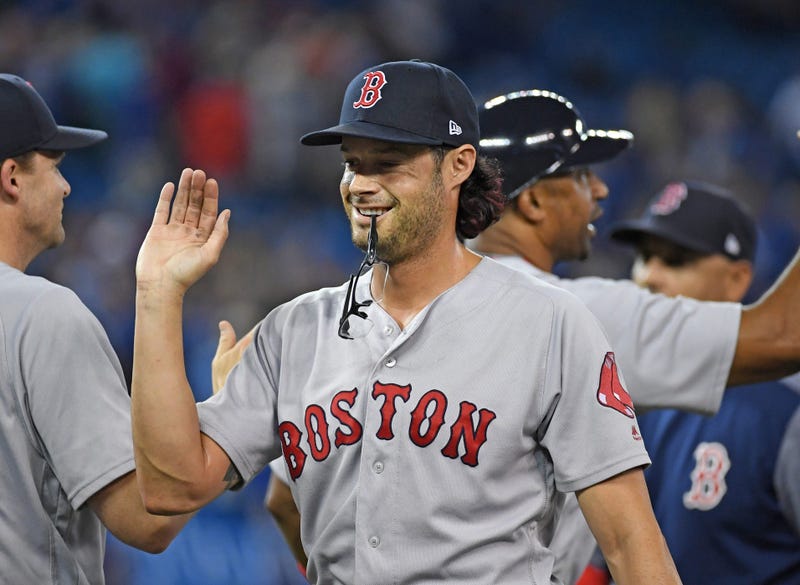 Alex Cora has said throughout the last few days he already has an idea what his postseason bullpen will look like and the final week of the regular season won't necessarily be a tryout.

Well, if the Red Sox manager had already executed a leap of faith with the struggling Joe Kelly he must feel a lot better about his decision. If Kelly was on the outside looking in, he just gave Cora a reason to take another look.

Kelly, who had been struggling mightily coming into Saturday night's game against the Indians, offered an intriguing glimpse into what he might be able to deliver.

Coming on with runners on first and second base with nobody out in a tie game in the 10th inning, Kelly had to stare down Cleveland's Josh Donaldson, Yonder Alonso and pinch-hitter Yandy Diaz.

Kelly had not been good for the majority of this month, allowing seven runs on 10 hits over 4 2/3 innings in his last seven outings, including a 1/3-inning outing at Yankee Stadium in which he gave up two runs on three hits. And to make things even more uncomfortable heading into the situation in Cleveland, Donaldson had owned the righty reliever, going 12-for-22 against Kelly.

But Kelly changed the conversation.

First, he struck out Donaldson, and then it was Alonso who went down swinging. And finally, Diaz grounded weakly to shortstop Xander Bogaerts to end the Cleveland threat.

Besides the end result, there were a few things that made the outing interesting when considering the Red Sox' postseason roster ...

1. Cora is desperate to find a reliever who can come in with runners on base and get the job done. Heath Hembree used to be that guy. He is no longer that guy. While this was just one situation, consider Kelly's propensity to get on runs (both hot and cold) it could be a notable one.

2. The pitch Kelly was able to lean on wasn't his well-publicized high-90's fastball. It was an impressive off-speed arsenal.

After taking advantage of what appears to be some diminished Donaldson bat-speed with fastballs, Kelly came back put Alonso away with back-to-back changeups (both eliciting swings and misses) after a curveball to leadoff the at-bat. Then, against the righty-hitting Diaz, Kelly went with two curves out of the strike zone before coming back with a pair of changeups. After getting to a full count with another curve, the reliever finished things off with yet another changeup.

The entire outing offered some food for thought.

Brandon Workman would seem to still have an inside track on a spot, allowing one of his eight inherited runners to score this month. Lefties Brian Johnson, Bobby Poyner and (all of a sudden) Robby Scott are also making pushes.