1. With the Antonio Brown news coming Saturday, an after thought has been Josh Gordon, who released a statement Friday afternoon — his first public comments since being conditionally reinstated by the NFL last month (more on that next). On the field, Gordon may benefit from the addition of Brown the most. Gordon is now the No. 3 receiver on the depth chart, which likely will give him some favorable matchups when it comes to the opposing secondary drawing No. 3/4 corners in coverage. Brown also has the ability to stretch the field on the outside, which potentially could free things up for Gordon to make plays on the outside. It wouldn’t be a surprise to see the two line up on the same side of the field a lot to try and create mismatches for Tom Brady to find. While the entire offense gets better with the addition of Brown, Gordon may benefit the most. Do not be surprised if he surpasses his totals from a year ago, granted he stays on the field.

2. Gordon’s statement Friday afternoon said he’s done talking about his past substance abuse and wants people to judge him on what he does in the future. While that is what he should be saying, he also said he “did not take the time to focus on a solution to my problem until this past year.” This seems to be a good sign when it comes to this year being different and Gordon being able to play a full season, but it also raises the question of how has he been reinstated so many times over the years when he says only recently has he focused on his problem? Don’t expect much media from Gordon this year, as the expectation is he will be limited to a few questions each time like last season.

3. While being in the minority on thinking Brown coming to the Patriots isn’t the greatest move for the organization, the biggest thing is what has Brown always been about? Himself. He’s not going to be a Patriot for multiple seasons because Brown is all about the money and the Patriots are not going to dish out top dollar for a receiver. This year is about his next contract and in order to maximize that next deal, he needs to put up good numbers. What happens when he has back-to-back games with three catches or less? While the evidence is there Bill Belichick can handle these situations, there’s also evidence Brown has the ability to go off the rails, very quickly. Time will tell.

4. The Patriots named their captains this week and one of the biggest surprises was fourth-year player Elandon Roberts. Many wondered why, but Belichick’s answer on Friday explained it. “He's probably one of the most unselfish players that we have on our team,” he said. “He'll do whatever he can to help the team in any way. He's also one of the toughest and most physical players on the team as well. He really is a tempo setter, an impact hitter, but his intelligence and his awareness and how hard he studies the game – football is very important to him, and that's reflected in the way he approaches it and the way he plays it. … I'm sure the players voted for him because of his toughness, his unselfishness, his dependability, his willingness to do whatever it takes to help the team win. You can't ask for anything more than that.”

5. It was also good to see David Andrews named a captain even though he will be out for the season with blood clots in his lungs. The center has been around the team every day this past week, a sign he will be around on a regular basis. Given his knowledge and uncertainty on the offensive line, this seems like a very good thing for the Patriots, and also for him, too.

6. The release of Russ Bodine on Friday was an interesting one, especially since the team just traded a sixth-round pick for him a week earlier. This one feels like a case of Dante Scarnecchia and Co. knowing it just wasn’t going to work out. Maybe Bodine came in and expected to immediately be the starting center and didn’t like that he needed to earn that role and beat out Ted Karras. The veteran had started all 74 games he played in before coming to New England, so perhaps the "earn your role" mentality didn’t sit well with him.

7. This will be a crazy next few days for the Patriots and the team opening the year and raising the sixth Super Bowl banner won’t even be the biggest story. It is Brown joining the team, which likely won’t become official until Monday and then it’s unclear when he will speak to the media for the first time. While it’s a week away, Brown can play in Miami next Sunday, but it’s hard to imagine him playing a large role with only a few days on the practice field and his hands on the playbook. He certainly will play, but it’s unlikely he plays all the offensive snaps. 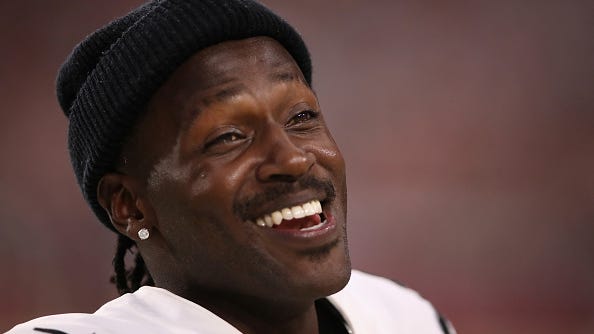 The Patriots and Antonio Brown: A Perfect Marriage