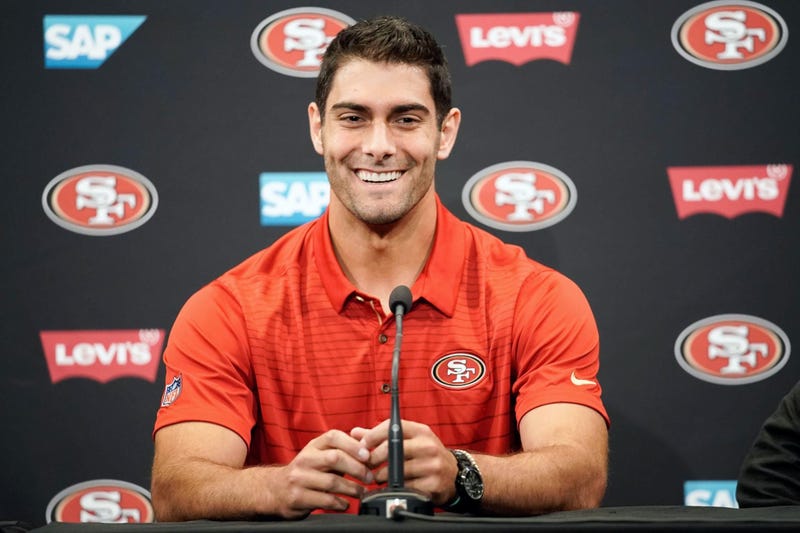 1. With all the drama surrounding the Patriots and Tom Brady this offseason, some have wondered what would have happened if Jimmy Garoppolo was still around and the team had franchised him. Well, as was stated at time, it simply wasn’t possible. The only way he would have been able to stay was if he signed a new contract and he wasn’t going to do that without the guarantee he would get to play. Even after the Brandin Cooks trade, the Patriots have about $14 million in cap space. The franchise tag number for quarterbacks was $24.9 million (before Garoppolo signed his massive deal with the 49ers), so the Patriots would have needed to have roughly $17 million more cap space for 2018 than they do now in order to have franchised him. We get this number by the team needing roughly $5 million to sign its draft picks and then have a couple million left over going into the year. For them to have made this work, the Patriots would have needed to trade Cooks and make all the cuts that they did, plus not sign Adrian Clayborn ($4 million cap hit), not trade for Cordarrelle Patterson ($3.25 million cap hit), not trade for Jason McCourty ($2.9 million cap hit), not re-signed Rex Burkhead ($2.3 million cap hit), not trade for Danny Shelton ($2 million cap hit), not re-signed Matthew Slater ($2 million cap hit) and not signed Jeremy Hill ($1.3 million cap hit). By not making all those moves, that would have given the team enough cap space to keep Garoppolo under the franchise tag, but it also would not have been able to have a competitive roster. Some might say it could have cut Dwayne Allen to free up more money, but doing that only would have allowed the team to make say two additions. Bottom line, the Patriots’ financial situation and ability to create a competitive roster was never going to allow them to franchise Garoppolo and have Brady on the roster for the 2018 season. It was one or the other and obviously they went with Brady.

2. What will it take for some to admit what’s happening with the Patriots this offseason is not normal? This is not a “media driven” story. Admitting what’s taking place this offseason isn’t normal is not saying the team will have issues in 2018, as they aren’t necessarily related. There can still be tension in the offseason and the team can still have a successful season. But, what’s taking place now could impact the future and how long both Brady and Bill Belichick last in New England. Brady’s actions have been very uncharacteristic and should be discussed at length. It’s not an attempt to “get clicks.”

3. A Washington Post study says the Patriots have the easiest schedule in 2018, just like it said for 2017. First off, a lot will happen between now and the start of the season so it’s really hard to say, but this Patriots schedule should not be taken lightly, especially the start. Historically, New England doesn’t play its best in September, but it will need to this year with games against the Texans, Jaguars, Lions and Dolphins all in the first four weeks. Then it has games against the Vikings, Packers and Steelers later in the year — it is not an easy schedule by any means.

4. When it comes to travel games for Patriots fans, the Nov. 11 game in Tennessee against the Titans will be a popular trip. Not only will it be a reunion game for Malcolm Butler and Dion Lewis, it will also feature Belichick coaching against his former player in Mike Vrabel. Lots of Patriots fans have already booked their flights for a weekend trip. Also, the University of Tennessee hosts Kentucky the day before, so it could be a football-filled weekend in the state of Tennessee for many New Englanders.

5. As the draft gets closer and closer the less likely we think it is the Patriots actually make two selections in the first round. Belichick seems to love the second and third rounds so a possibility could be making one selection and then trading the other first-round pick to move back in the draft and pick up a couple selections in the second and third rounds. Another possibility, although not as likely, is using both their first-round picks to trade up higher in the draft to perhaps get in the 10-15 range. Next Thursday night certainly will be interesting, as their are a number of scenarios that can play out.

6. Here are a couple of Patriots draft-related nuggets courtesy of the Patriots PR staff. Under Belichick, the Patriots have only made two selections in the first round twice (2004: Vince Wilfork and Ben Watson, 2012: Chandler Jones and Dont’a Hightower). In the Belichick, era, the Patriots have made 62 draft-day trades — 20 to move up, 21 to move down and 21 involving players or future considerations.

7. It will be a busy end of the week at Gillette Stadium. The first round of the NFL draft is Thursday night, Rounds 2-3 on Friday night and then Rounds 4-7 on Saturday. Belichick is not expected to address the media at all, as it will be Patriots director of player personnel Nick Caserio after each day.