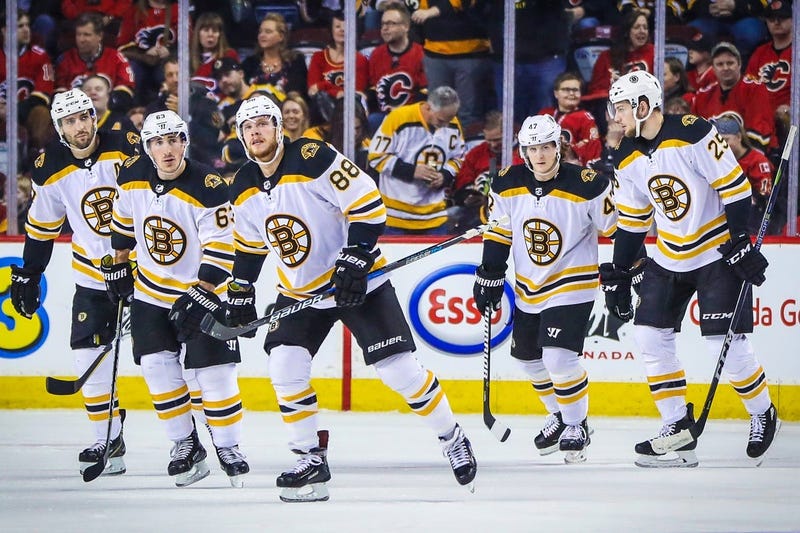 The Bruins knew they played a little too fast and loose in the defensive zone in their 6-1 loss to the Canucks, with six goals on just 24 shots against, on Saturday.

But after a Sunday practice focused on adjusting -- or returning, rather -- to their patented five-man support in front of their goaltender, the Bruins successfully got back on track and to their roots in a claw-it-out 2-1 overtime victory over the Flames.

Out to a lead behind David Pastrnak’s tally, the Bruins carried a 1-0 lead into their locker room after holding the Flames to just four shots (compared to 13 from the Bruins), and with only maybe one or two of those four shots being legitimate scoring chances.

The Bruins continued to carry the pace of play in the middle frame, too, even with a game-tying power-play goal from Matthew Tkachuk, with 10 shots to Calgary’s eight.

But the Flames’ David Rittich came to play.

He came through with a massive breakaway stop on Ryan Spooner in the second period, and did the same to Pastrnak late in the third period. Rittich even denied Riley Nash on the doorstep on a set play off an offensive-zone faceoff win.

Rittich was also forced to stop countless odd-man rushes from the Bruins.

The Flames eventually tried to reward their goaltender with a strong offensive surge, which first came late in the third period, as Tuukka Rask was forced to stand on his head for prolonged stretches of attacking-zone pushes. By the end of the period, with the B’s sucking wind, Rask had faced 12 shots and stopped all of them.

And in the overtime, Rask was even better, and made five actually game-saving stops before Nash fed Brad Marchand for a backhanded breakaway dagger on Rittich.

This was the perfect response across the board.

While the B’s would have liked to have generated a larger lead behind their dominant first period, their refusal to let the Flames score on their few early chances, which would have allowed them to dictate the pace of play in their building, was absolutely crucial. That helped the Bruins extend their road record to an impressive 17-6-4.

And Rask, whose rebound control was a little suspect in Vancouver, came through with the tempo-changing stops the Bruins needed to remain in control against a typically run-and-gun Calgary squad led by Johnny Gaudreau (five shots in 22:19 of action). Rask finished the day with stops on 28-of-29 for his 24th win of the season.

They’re obviously simple adjustments in the grand scheme of things, but ones that Bruce Cassidy’s team continues to make without even a slight hiccup, as the Bruins have yet to lose back-to-back games since the middle of December.

The Black and Gold will attempt to escape Western Canada with wins in two of three when they visit Connor McDavid the Oilers tomorrow night.