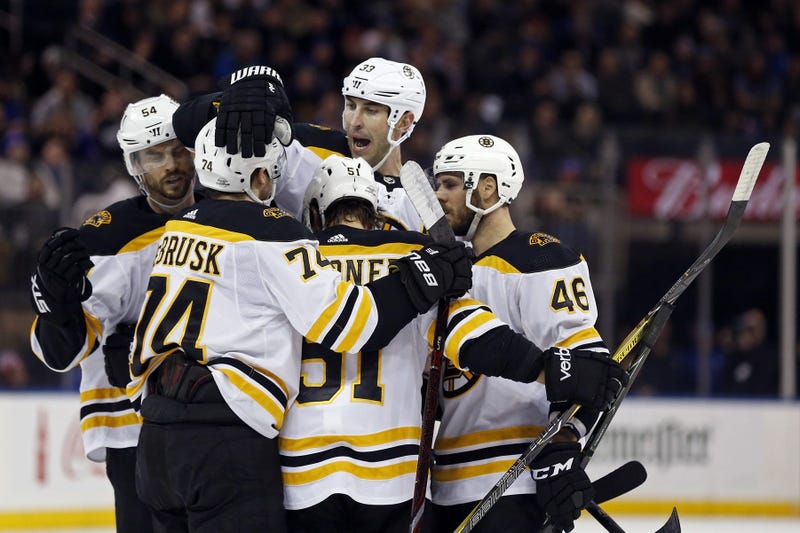 These days, it doesn’t look like anybody can stop the Bruins.

Not even Rangers netminder and one-time Bruins minority owner Henrik Lundqvist in stat-line alone, who was chased out of the crease in the second period after allowing four goals on 16 shots, looked capable in a MSG-emptying 6-1 blowout win for the B’s.

Oh, and here’s where I tell you that the Bruins came into this game on the second leg of a traveling back-to-back, with backup netminder Anton Khudobin in net instead of the white-hot Tuukka Rask, and having lost both prior meetings with the Rangers (and seven straight contests to the Rangers overall).

Again, it’s hard to find anybody that can legitimately stop this team, or even come close to stopping this team from almost effortlessly imposing their will for the majority of play.

When Rick Nash went around Zdeno Chara and scored on Khudobin just five minutes into game, the Bruins stormed back with their third line, and with Riley Nash going Nash-for-Nash with his eighth goal of the season. Chara, apparently not satisfied, extracted further revenge with a wrist shot through Mats Zuccarello and by Lundqvist with 3:51 left in the first period to give the B’s a 2-1 lead through 20 minutes.

But with little (no) resistance from a straight-up disastrous Ranger defense corps, the Bruins extended their lead to three with a Patrice Bergeron goal and the prettiest goal New Hampshire has ever produced with an insane individual effort from Tim Schaller.

WHAT A GOAL! Tim Schaller with the deke and the snipe!-- #NHLBruins pic.twitter.com/tG7oiYgUyF

But even as Ondrej Pavelec entered, the Bruins refused to take their foot off the gas.

The Brad Marchand-Bergeron penalty-killing combo needed just 2:35 before they connected for the B’s fifth goal, and it wasn’t until Sean Kuraly’s sixth goal that the Bruins seemed to call off the proverbial dogs, at least in the form of goals scored.

The B’s still carried the pace of play, though, outshooting New York 12-to-4 in the final frame, with the Bergeron line nearly scoring a goal on every single one of their shifts. If there was a time in which the Bruins took their foot off the gas at any point in this game, I'd love to find it.

And with this being the one-year anniversary of Bruce Cassidy ascending to the B’s head coaching job, it only felt fitting that the Bruins came through with one of their most unrelenting efforts from all four lines and noticeably active games from their points.

These efforts have become by all means common under Cassidy, who is now 51-19-9 as the Black and Gold’s head coach. Those 111 points are the second-most in the NHL over that span (and the Bruins have played three fewer games than the league-best Lightning over that span). Their power play is the third-best in the NHL since then, clicking at 23.8 percent, while their penalty kill ranks No. 2 in the NHL, at 83.6 percent.

It’s honestly as consistently dominate as a team and coach can be in today’s parity-loaded league, really, and made Wednesday’s blowout just another win.

Imagine thinking this would ever be considered the norm on this day a year ago.