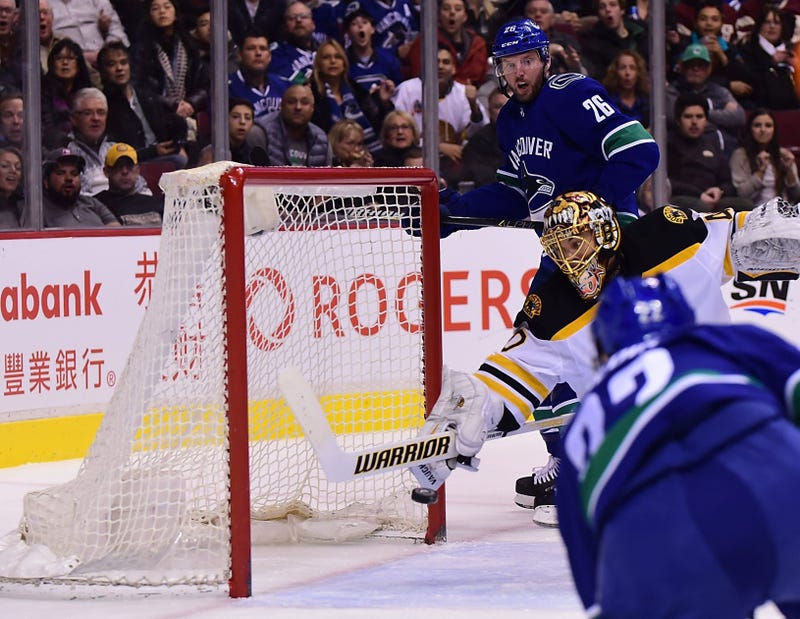 If presented with the option via the start button, the Bruins more than likely would have rage-quit after the opening 20 minutes of Saturday’s 6-1 loss to the Canucks.

Once they turned their controller back on, anyways.

Giving the middle of the ice to the Canucks, the Bruins allowed four goals on just nine shots in the first period. At least six of their shots against Tuukka Rask, pulled after 20 minutes after stopping just five of nine shots, were of the highest possible quality allowed. And with almost zero resistance from the B’s typically strong defense.

At the other end of the ice, the Bruins failed to take advantage of a dominant period that saw them double up the Canucks in attempts, and also failed to make Vancouver goaltender Anders Nilsson pay for what was a suspect start at best. (Nilsson struggled to control rebounds, his gloved looked wobbly, and the B’s flat out missed the net a ton.)

It was a season’s worth of frustration packed into 20 minutes and a 4-0 deficit.

“It’s not like we didn’t have our looks, but the looks we produced for them… they’re gonna capitalize on them,” David Backes said. “We hung our goalies out to dry.”

It didn’t get much better for B’s backup Anton Khudobin, who was scored on just 2:44 into his relief appearance, and faced 10 of his 15 shots against in the second period.

It wasn’t until the game was decided with a 5-1 mark in the third period, and with a shorthanded goal from Loui Eriksson extending the Vancouver lead back to five at 6-1, that the Canucks stopped tormenting the Bruins with goals that took Boston about three times the effort.

Oh, and after what had to have been one of the worst-looking (but obviously effective) 44-of-45 performances I've ever seen a goaltender put together.

In a game short on any real positives -- Jake DeBrusk and the all-effort play of the Schaller-Kuraly-Acciari line were the only true positive takeaways from this game -- you’re left to simply pick out things that are noticeable (and potentially concerning).

For one, and for whatever reason, Rask continued to struggle in his return from a restful break.

Entering play with a sub-.500 record and hardly .900 save percentage in with at least three days rest, tonight’s 5-of-9 performanced dropped Rask’s mark in these situations down to 6-6-2, and dropped his save percentage from .909 down to .901. That aforementioned record also means that eight of Rask’s 14 total losses on the year have come with the 30-year-old having more than enough rest to his name.

(Rask, for what it’s worth, was not the biggest reason why the Bruins were blown the hell out of Vancouver. But his iffy rebound control and inability to settle things down with big stops, struggles we haven't seen out of Rask in almost three full months, didn't help.)

But the biggest problem was that this was another game where the Bruins did not seem to take their opponent seriously, especially when it came to defending their own net.

You saw this lead to trouble against the Sabres and Devils last week, where the slot seemed beyond open for the opposition, and the Bruins used some second-period line changes and tweaks to stop it from repeating in their Tuesday win over the Flames.

“I don’t know if we were looking at the standings and thinking we had an easy night, but kind of similar to Buffalo where we were 70-75 percent of our game, [the Canucks] were probably seeing us coming in, and they played an in-your-face, tight-checking [game].”

Fortunately for the Bruins, there should not be any sort of mental letdown or relaxation when they travel to Calgary for a showdown with an in-the-hunt Flames squad.