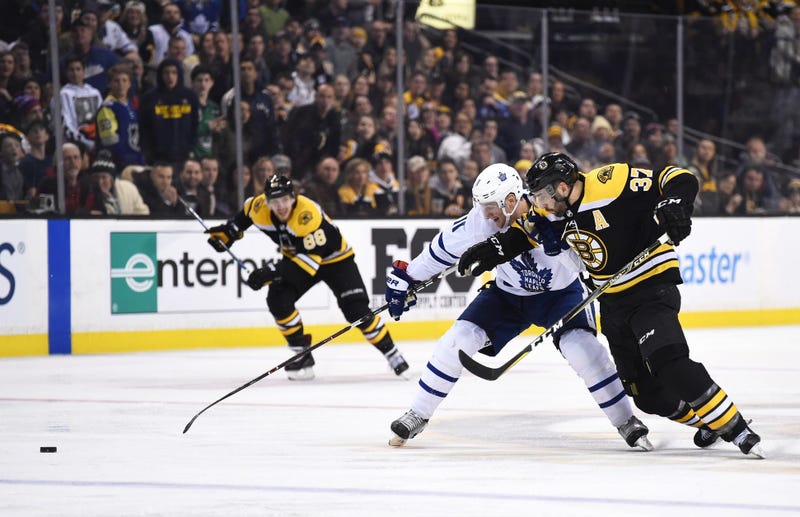 His latest trick? He made Leafs No. 1 center Auston Matthews, who arrived to Boston with 23 goals and 40 points in 43 games played, the latest superstar to disappear.

In just under eight minutes of five-on-five action squared up against one another, Bergeron’s presence saw the Bruins lead the Matthews-led Leafs in shot attempts 9-to-2, and helped hold Matthews without a shot on goal (the shot totals favored the Bruins by a 4-0 margin). Bergeron even scored a goal, too, when he capitalized on some downright poor positioning from all five Toronto skaters on the ice.

“They’re a good line, they’re good on transition, they’re moving their feet well. They want to make plays, but I thought we did some good things. We, for the most part, tried to keep them to the outside,” Bergeron said. “They’re going to have some looks, some chances, but you know they’re good players so I thought our line was moving our feet well and we were on the puck for the most part and we had some good looks as well.”

But it wasn’t just Bergeron that Matthews had the (impossible) task of matching up against. On the rare instances that they did indeed get ahead of Bergeron and into the attacking zone, the superhuman pairing of Zdeno Chara and Charlie McAvoy were ready and waiting.

“I knew we were going to be playing against A-Matts,” McAvoy, who logged over 18 minutes in his first game in two weeks, said. “He’s a phenomenal player. I got the privilege to play with him on a couple of different teams. He’s just special. You just try to minimize a guy like that because he’s gonna make plays. All the best players do.”

And Bruins head coach Bruce Cassidy, whose day began with him outright admitting the difficulties that come with getting into a matchup-based game with the Leafs, couldn’t help but love the uncomfortable situation he was able to force Toronto’s top line into.

“I liked it, because I thought Matthews was generally quiet, and I’m not being disrespectful, but he wasn’t the offensive force he has been in the past against us,” Cassidy said of the matchup, which saw Matthews finish with a career-low from a possession percentage standpoint. “You’ve got to give credit to the players on the ice, and that’s a challenge Zee relishes, Charlie, Bergy’s line.”

“You need everybody who is on the ice doing their job and playing to the same direction,” Chara said after the victory. “And obviously they have a good team and very talented players that can make a difference in the game. So, we were really focusing and trying to take away as much time and space for them as possible.”

“If they’re not getting great chances with that top line, we can continue to play certain matchups that favor us,” McAvoy added. “It’s a bit of a domino effect.

"We do our job, everyone does their job, and we get rewarded on both sides of the ice.”

But this was no easy feat.

The Matthews line, with Zach Hyman and William Nylander on the wings, entered Saturday’s game with 29 five-on-five goals scored when together this season (the third-most in the NHL). Their plus-20 goal differential in this department was the league’s best mark, too, one goal better than the lethal Bergeron line with Marchand and David Pastrnak on the wings. The line also entered play dominant in terms of their possession figures, too, ranking as the 11th-best line in hockey in Corsi-For percentage.

“I think the neutral zone is where they kind of want to get going and get their chances and their speed,” Bergeron acknowledged. “You know, if we do a good job there, usually it definitely helps us to defend as much as possible and to go back on the attack. So I think denying the speed as much as possible, and if you finally get in their zone you try to keep them to the outside as much as you can as well.”

And without the neutral zone at Matthews’ disposal, the Bruins found a way to take literally everything that makes the Matthews line (beyond) elite and simply grind it down into absolute nothingness. It even hit the point where Maple Leafs head coach Mike Babcock threw the line in a blender in search of offense in the third period.

“I think a lot of it had to do with us having the puck more too,” Cassidy noted of their Matthews (and Leafs as a whole, really) shutdown. “If he’s not flying through the neutral zone with the puck and we’re killing those [chances]; not giving him time and space, force him to defend. I think we were able to accomplish that quite a bit tonight.”

Well enough to make you wonder if Matthews was even playing in this game.